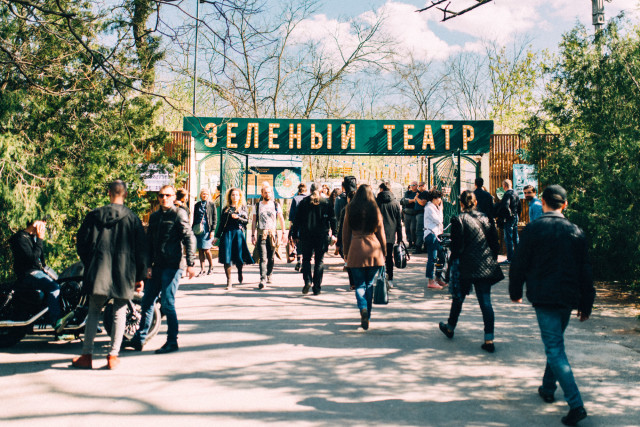 Shevchenko Park’s Green Theater is the first and only open-air amphitheater in Odessa. Since the 1930s, it has been setting new standards for the city’s cultural life, considered one of the most popular and sought-after summer concert venues. A recent innovative reconstruction has brought new life to the location and quickly placed it on the list of favorite recreational spaces for the city residents. This spring, the Green Theater triumphantly enters its second season.

The Green Theater’s story begins with a shapeless hole in the ground in the middle of Shevchenko park. In 1876, the Odessa city council wanted to turn this area into a pond in the shape of the Black Sea, but it was not to be. The meager municipal budget was sufficient only for the digging of a deep pit. Not to be deterred, Odessites decided that such a prominent location couldn’t be left without purpose. Soon, thanks to the efforts of port workers, Lanzheron fisherman and residents of the old customs district, the area was transformed into a huge soccer field. Incidentally, these events also led to the origin of the famous Odessa soccer team Chernomorets.

In 1936, architects Baumstein, Nazarets and Vladimirskaya decided to turn the football field into a unique open-air amphitheater for the benefit of all Odessites. Its stands were intended to accommodate three and a half thousand people, with a proscenium large enough for four hundred performers, and an orchestra pit built to fit seventy musicians. Despite technical difficulties and the scale of the project, the amphitheater opening took place on July 11th. Guests were greeted by a sign on the central bas-relief: “Art belongs to the people.” And here, it was not only art that belonged to the people. Locals began referring to the venue as the “Green Theater,” and the name stuck.

In the aftermath of the Second World War, the theater was partially destroyed. However, in 1946, in preparation for the arrival of the legendary singer Claudia Shulzhenko, Odessites gathered for the theater’s restoration. Long-time residents of Odessa are likely to recall the noteworthy performances of artists such as Alla Pugacheva, Edita Piekha, Sofia Rotaru, Arkady Raikin, Mikhail Vodianoy, Anna Herman, Tarapunka and Shtepsel that took place there. In the 1970s, Odessites flocked to the Green Theater to hear covers of the Beatles, Deep Purple and Led Zeppelin performed by Polish and Czech bands. In August of 1996, the legendary band Nautilus Pompilius played their farewell concert on these very grounds.

In 2015, thanks to the efforts of volunteers, just as in 1946, the Green Theater was lifted from its abandonment and once again turned into a favorite leisure spot for Odessites. Today, volunteering and social entrepreneurship have an enormous potential in Ukraine. A realization that the time for change has arrived is evident in the minds of the young, progressive generation of Ukrainians. Impact Hub Odessa, an organization that stands at the center of youth volunteering activities in the city, set out to completely renew the Green Theater, not so much with brick and mortar, but through reinvigorating the old venue with modern concepts of healthy and pleasant recreation. They decided to fuse the formats of a park and a theater, and to transform the concert venue into something extraordinary. With the efforts of volunteers, over the course of weekend outings with music and refreshments, the Green Theater was cleaned up, a wooden deck was laid and the stage was set. A traditional full-scale restoration is not planned. The theater is an example of contemporary urbanism — it was created from the existing architectural legacy, combining history with modern vision.

In 2001, the theater was sold into private ownership for less than 40 thousand dollars. The investor promised to build a children’s entertainment center there, but this never materialized. In 2016, the city authorities approved a project to construct a high-rise hotel on the site — a historically and culturally significant section of the park. Impact Hub Odessa managed to extend the lease on the territory for the second year, and are hopeful that the Green Theater will survive going forward.

Thus the Green Theater of the 21st century was born — a public space for inspiration, development and recreation. It is the only theater-park zone in Ukraine that offers cultural, educational and environmental activities across five different settings. The Green Theater’s first season since its restoration saw the site become one of the most popular venues in the city.

Numerous captivating events were held here in the first season, including lectures by the legendary Andrey Makarevich, poetry and literary nights of Dmitry Bykov, Serhiy Zhadan, Les Podervyansky and Ada Rogovtseva. Among the musical performances at the Green Theater in 2016 were concerts by Benjamin Clementine, Dakh Daughters, Pur:Pur, Odin v Kanoe and Ivan Dorn. On a daily basis, the theater was home to various projects, dance events, lectures, picnics and festivals. Green Theater’s second season opened with the Festival of Urban Food on April 15th. Now, Odessa’s residents are eagerly awaiting the announcement of upcoming events, which promise to be even better this year.

Olga Lumerovskaya is a marketing manager at The Odessa Review.