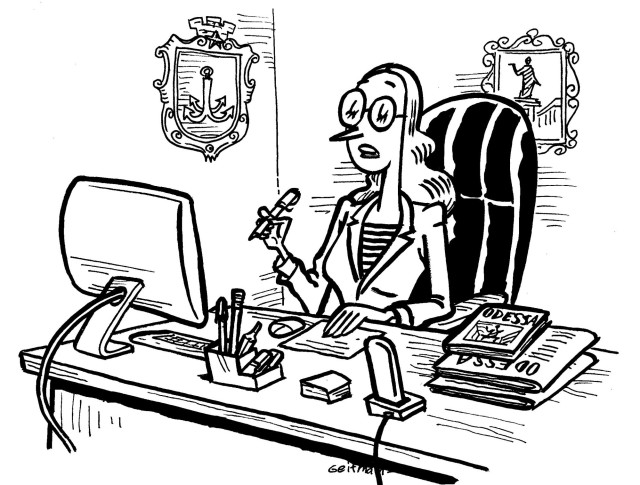 For a very short period of time, the Odessa Intelligentsia had worked as the head editor at a local newspaper. After receiving this title, she immediately phoned to inform me that she would not be publishing my work.

“No No, that’s not the issue!” she cut me off sharply. “It’s just that publishing you would be in poor taste…I’m a woman of class, you see.”

Despite her strict warning, I did once dare to bring her my article on the construction of an enormous hotel in the city port. Those who decided to put it there had presumed that the statue of the Duc would look better set against the background of a commercial skyscraper rather than the harbor. I had radically disagreed with that presumption.

The Odessa Intelligentsia only read the first paragraph…and went into a frenzy. Oh, how she shook and stomped!

“Why don’t you get out of here” – she demanded – “I don’t want to kill you where you stand. Just pretend that you were never here. You don’t exist. And Odessa is here, looking towards the future!’’

“You stupid fool!” – she screamed – “those who think are precisely the ones who do not exist!”

“What about those who don’t think?”

“They don’t exist all the more!”

“Those that earn money!” – she said, in a manner indicating that our dialogue had come to a conclusion. In a somewhat conciliatory tone, she also added:

“Why don’t you come have a cup of tea with me tonight? Differences in opinion should not affect relationships. It is feelings that are most important, don’t you agree?”