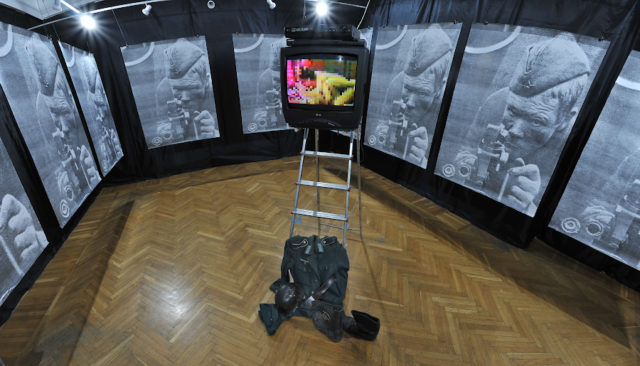 The official title given to this project is “The Intrepid 90’s”. However, I, as someone who was a first-hand participant through that romantic and precarious period of material and spiritual decommunization, would not agree completely with that designation. To me, the 90’s were a decade of bravery rather than ‘wildness’.

Inspired by the mere possibility of real social change, artists entered a period of active – turbulent, even – creativity. Themes appeared which had been prohibited under the chokehold of communist ideology. Of course, social critique was present, including critiques of new “bourgeois” themes – from artists who had barely had a chance to live in a country where the “bourgeois” was no longer an off-limits and criminal concept. The decade in question, at least in relation to the arts, was ushered in at the end of 1989 with a very large painting exhibition, “After Modernism”, in the Odessa Museum of Fine Arts. At that time, the exhibit generated a storm of public interest (in both) the positive and negative ends of the spectrum, which also included protests.

One of the main issues with this current exhibit is that of the impossible task of fitting so many different events and currents into one exhibition. The main questions the organizers had to ask themselves was: which artifacts should be selected, and which left behind? How should the artifacts be presented and reconstructed – reconstructed because in many cases the specific technology, materials, or even the objects themselves from the era are long gone??

Simon Kantor, the director of the Odessa Modern Art Museum, was the author of both the concept and the title for this exhibit. It is fitting to launch this exhibit after the museum’s previous one, which dealt with Odessa Conceptualism, a movement which proliferated in the 80’s. It seems only natural to move on to the art of the 90s. It is especially important that this exhibit is being held now, while some of the artists featured are still living in Odessa and the spirit of that time has not yet been forgotten.

The scope of artists represented – like the artifacts on display – also had to be limited, unfortunately. This was somewhat disappointing to me, as a member of the art movement in question myself (during the 90’s, I represented Ukraine at European exhibitions as part of the “League 14” group, hosted the contemporary art program “Situation UTE”, and together with Viktor Malyarenko, brought many foreign artists to Odessa). The exhibition, however, focuses on artists who lived and worked in Odessa.

In the early 90’s, Odessa’s art world ran on pure enthusiasm and inspiration – that is, until the well-known Odessa born, Ukrainian painter Aleksandr Roytburd managed to attract the attention (and also the funds) of the George Soros Foundation, or as he was referred to us in the scene, as “Uncle Soros’. With the creation of the Soros Modern Art Center, the Odessa art scene truly began to thrive – performances, exhibitions, projects that were in a constant state of flux; the activity of the time was incessant. In those times, even Kyiv envied our “wildness”!

The main themes that attracted artists in the 90’s were the new but rampantly growing capitalism and one of its outgrowths, the “New Russians” (the post – Soviet term for nouveau riche) social class phenomenon. These topics were the subjects of biting and sometimes vicious criticism and satire. Projects with a more serious tone also were created – these included Stalingrad under Berlin, by the artist duet Chekorsky/Kulchitsky, which was an attempt to re-contextualize World War II as precisely that – a world war, as opposed to the ‘Great Patriotic War’, as it was known throughout the existence of the USSR. Other themes of note included the influence of mass media and consumerism, the meaning of material possessions in the face of the new and overwhelming free market (an example of this can be seen in the Supermarket project). For some reason, the themes of abnormality, disease, “disorders” proliferated at the time as well – perhaps as a reflection of the neurotic and anxious atmosphere which always accompanies rapid social upheaval.

All of these statements were conveyed in contemporary means and using new formats, forms which were still unfamiliar and often shocking to both Soviet and newly post-Soviet society and mindsets. The installations and projects were quite provocative, creating polarized reactions – and the nature of these shocked responses only served as further inspiration for the artists, driven to reaffirm their newfound creative freedom more and more. We were all of us overstimulated, we argued, we fought and discussed and most importantly we created. We were creating a new world free of the illusions and lies of communism, a world where its suffocating tenets would be nothing more than the punchline of a joke.

An innumerable number of objets d’art, installations, performances and “actions” were born of that era…but somehow, tragically, towards the end of the decade the activity began to decline. The Soros funding gave the arts a needed catalyst, but a local class of patrons failed to keep the momentum alive after the initial investment had run out. Sadly, they failed to understand the meaning and the sheer importance of this “new” art. This is yet another reason why this exhibit is of such importance – it lets us rediscover that lost era through meticulously recovered texts, videos, pamphlets, posters – and it gives us a chance to preserve the ineffable zeitgeist of the 90’s, that brave and wild decade, for future generations.