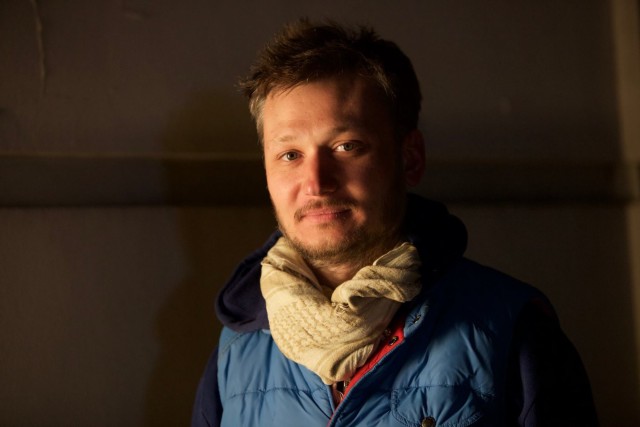 Football fans are looking forward to seeing the new film about legendary coach Valery Lobanovskiy. Anton Azarov, film director from St. Petersburg, shot more than forty hours of material over two years, meeting and interviewing significant people from Valery Lobanovskiy’s history. Prior to the premiere, which will take place on December 1st in theaters all over Ukraine, Anton Azarov shared his thoughts about the film with The Odessa Review.
The Odessa Review (Volodymyr Gutsol): What does football mean to you personally? Do you play football?
Anton Azarov: To tell the truth, I am not a football fan, and I never have been. It may seem strange, but I am rather indifferent to the game. This film was like a challenge for me: I was ready to learn a lot about football, and after two years I became more interested in it.
OR: You are form St. Petersburg — did you feel the influence of competition between cities?
AA: I felt absolutely ok to cheer for Dinamo while watching the chronicles. After discovering Lobanovskiy, opening up this history full of events and drama, I felt a connection with the Kyiv football club and a reverence for the team.
OR: What inspired you to make a film about Lobanovskiy? Was there some special event, date or anniversary related to his life?
AA: There shouldn’t have to be any special date to make a movie. A film is much more powerful, sentimental, pleasant and dramatic when it comes from your heart.
I have had a similar film making experience, by the way. I had made a four-part film about hockey and legendary Vyacheslav Fetisov before. Basically, I like the challenge of investigating personalities in sport, no matter what kind. It is the person who matters, his spirit, talent — verging on genius — and will to win.
Valery Vasilyevich had an amazing quality, he delivered a vision: the result is more important than the process. This is the kind of person Ukraine needs in modern politics, unlike those who give promises with no results. In this sense the film is important, because it shows that there were such people in Ukraine. A man who does or dies! It’s a great message, so relevant nowadays.
OR: You have gathered many exceptional people in your film. Did you meet them all in person?
AA: Not everyone. We worked together with Sergey Polhovsky and he interviewed people from Europe. It seemed to me that Lobanovskiy’s contemporaries were talking about him with tenderness; they were open-minded and honest. Lobanovskiy seemed to be still alive in their memories.
OR: The film is especially interesting for the Odessan audience because the main character studied here and played quite a few games for Chornomorets. Did you include Odessa in your movie?
AA: We had such an episode but, unfortunately, we had to shorten the film and we cut it. In the film, we do mention that Odessa was not a successful period in his career. There is an opinion that it wasn’t his choice to play for Chornomorets. There was an unspoken rule that strong Ukrainian players could not play in Russian championships, so he was, in a way, deported to Odessa.
OR: What question would you ask Valery Lobanovskiy if you had the chance?
AA: It is hard to say. I have so many questions for him! I do regret that such a great master left us without establishing a school. He did not get the chance to transform all his experience into something bigger than just players on a field. Sadly, this happens in many spheres of life, not only in football.