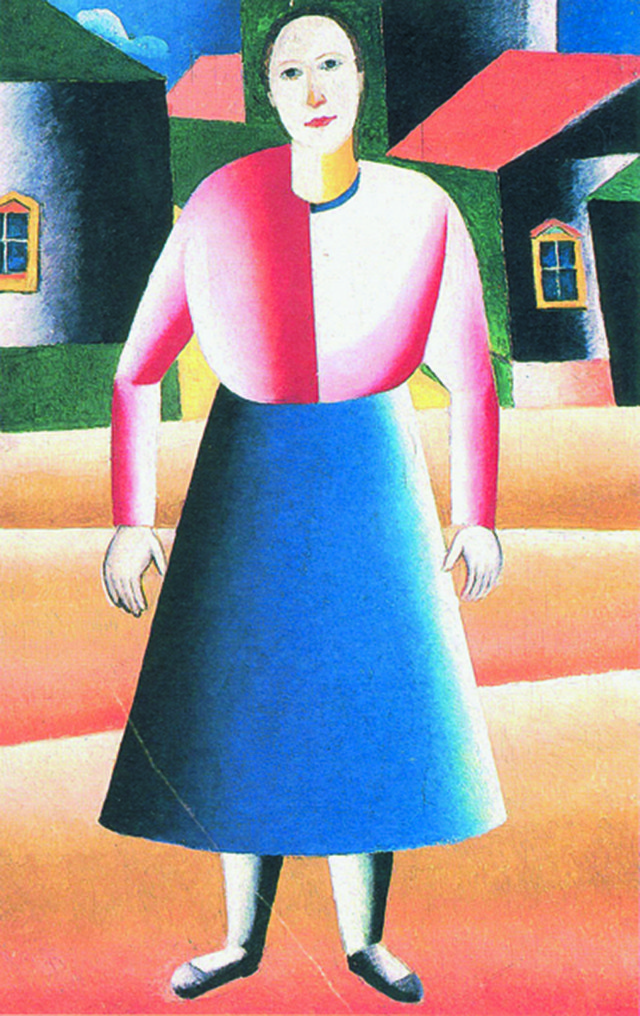 This October saw a remarkable conference take place in Kyiv on the legacy of the great artist whose Ukrainian ties are only now garnering academic and popular interest. The need to celebrate Malevich’s Kyivan legacy is raised in numerous public debates amid a campaign to rename Boryspil Airport in his honor.

The layman may dismiss academic conferences as the self-indulgent pursuit of a handful of scholars, but it is here that issues of global relevance are often raised before they enter public discourse. The “Kazimir Malevich: Kyiv Aspect 2016” conference that took place at the National Academy of Fine Arts and Architecture on October 6-8th 2016 was nothing short of historic. The three-day multidisciplinary event brought together renowned academics from across the globe with the intention of putting the artist’s “Kyiv period” firmly on the agenda of future generations of art historians, researchers, collectors. The event brought much-needed emphasis on the crucial contribution that Ukrainian culture made to the development of Suprematism.

Far from being a muted affair, the conference was a true celebration of the “Spirit of Malevich.” The project was championed by Tetyana Filevska who edited the seminal volume at the heart of the investigation, “Kazimir Malevich: The Kyiv Period, 1928-1930.” In addition to the usual papers on a variety of topics, the conference had a cultural festival feel, featuring art exhibitions, performances, concerts, workshops, lectures, roundtable discussions, and even film screenings. However, the stellar academic cast preached largely to itself: the majority of seats in the assembly hall of the Academy remained empty, even though the event was free and took place on a weekend. And while the conference made a convincing revisionist contribution to art history, highlighting the Ukrainian element in Malevich’s legacy, it had a wider significance. The discussion brought to light a range of uncomfortable issues regarding the state of Ukrainian culture, education, and cultural diplomacy. 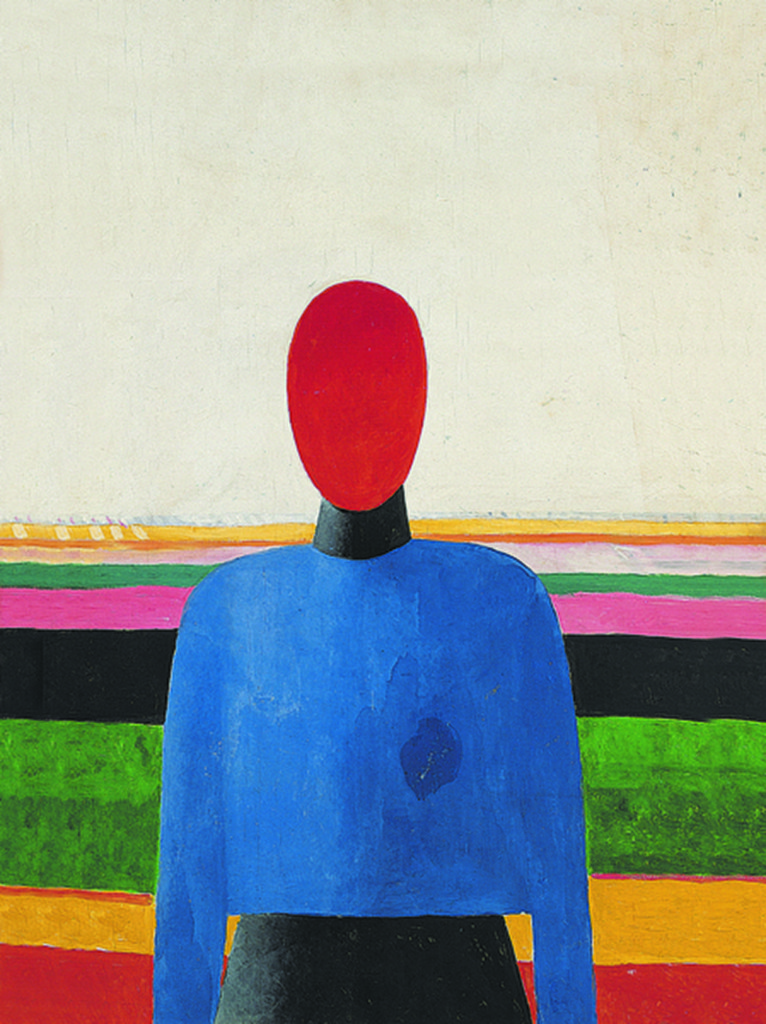 In 1919, having ascended to what was arguably the ultimate peak point of abstraction, the godfather of the Russian avant-garde movement declared the Suprematist experiment to be complete. The objective had been to pave the way towards a visual representation of “pure artistic feeling” rather than of objective reality. We now have a tendency to think of Malevich as a visionary figure who sought to break with tradition and a scholar whose art had more to do with philosophy than with craftsmanship. It might therefore surprise many to learn that until the age of twelve the young son of a Polish sugar factory manager knew nothing of professional artists, and only studied drawing briefly in Kyiv between 1895 and 1896. Peasant embroidery, the decorated walls and stoves of village dwellings and icons were his inspiration in a childhood spent in the villages of Ukraine, far from centers of culture. The influence of those formative years on the later work has been largely overlooked in scholarship until recently, although it is precisely the experience of Ukrainian traditional culture, rather than the European bourgeois art of the late nineteenth century, that crowned his style with an acute awareness of color and form. In his abstract works, he used only basic geometric shapes along with the constraint of severely restricted usage of color. His iconic “Black Square” (1915), the epitome of the Suprematist movement, became an emblem for a cerebral approach to painting, an embodiment of a defiant manifesto that proclaimed art to be a visual language designed for communicating concepts and a sense of the immaterial. Suprematist ideas would lay the foundation for our contemporary understanding of art, as well as presaging the role of the artist as primarily a thinker, rather than an artisan.

The Ivory Tower: A Stellar Bill, an Empty Auditorium

The conference gave voice to two dozen presenters, both Ukrainian and foreign scholars, whose research is helping us to piece together the titular phenomenon that is the “Kyiv Aspect” of the Malevich oeuvre. It was a truly international affair, that included speakers from Ukraine, Russia, Belarus, Poland, France, Germany, Portugal, the United Kingdom, and Israel, as well as a number of well-known Ukrainian cultural leaders. The idea that Ukraine is the birthplace of a historical movement that developed independently of Russian avant-garde art is not widely accepted in Western academia. Indeed, things quickly turned political. The poor attendance at the all-star conference served as an unwelcome reminder of the apathy that grips the Ukrainian academic establishment, even though Dmitry Antonyuk, an architectural historian and lecturer at the Academy, assured me that students have been freed from academic commitments so that they could attend. Longtime researchers of Malevich quickly recognized one another, and joked about the historical inevitability of finally meeting in Kyiv, where it all began. The undeniable headliner of the academic bill was Jean-Claude Marcadé, a notable French art critic and museum curator, as well as a self-proclaimed champion of the Ukrainian avant-garde. Marcadé pointed out Ukrainian geography, culture, landscapes and the Ukrainian color palette — in particular the prevalence of bright yellow, a color that informed the aesthetic of the conference — as fundamental influences in the development of the distinct cultural phenomenon that is the Ukrainian avant-garde. Characterized, first and foremost, by the works of Kazimir Malevich, it also also includes important figures such as Oleksandr Bohomazov, Mykhailo Boichuk, and Oleksandra Ekster. Marcadé urged Ukrainians to increase their efforts to popularize the heritage of their twentieth-century art and regretfully recounted his ill fated plans to prepare a special Ukrainian edition of a respectable journal of Slavic studies, stunted by the difficulty of finding Ukrainian scholars to contribute papers.

Andrei Nakov, a French art expert of Polish-Bulgarian origin, highlighted the mythological dimension of the Malevich legacy. Every national culture has its myth, and Malevich’s genius may have much to add to the Ukrainian cultural myth of the turbulent 20th century. A senior researcher who had the opportunity to interview surviving members of the Malevich family in the 1970’s, he expressed the difficulty of untangling the contradictory legacy of a man born in Ukraine to Polish parents, swirled about by the winds of political upheaval, and forced to rewrite his own history to ensure the survival of himself and his family.

Aleksandr Lisov, of Vitebsk State University, Belarus, brought much to the table in his discussion of Malevich’s “Vitebsk Period” and the manner in which Malevich’s work has been woven into Belarusian cultural history. The town where Malevich taught remained on the frontline of the Russo-Polish war of 1920, another painful page in the artist’s biography. Lisov expressed a plaintive call for closer attention to be paid to Malevich’s pedagogical method, something which seemed to resonate with the scholars gathered at the conference. Patricia Railing, art historian and President of the International Chamber of Russian Modernism in Paris, distilled her lifelong work on the concept of “Suprematism as pure sensation” into a compelling lecture, bringing together Malevich’s fascination with the physiological optics of German scientists and his artistic pursuits. The basic shapes — the circle, the square, and the cruciform — were informed by the anatomical parts of the human eye, while the “color masses” drew on modern chromatics. Joseph Agassi and David Harel, an Israeli investigative duo, gave a taste of their forthcoming book, a definitive catalogue of the lost Malevich paintings. They also commented on the difficulty of piecing together the many works of Malevich that have been lost during the many years of revolution, war, turmoil, and political terror. The Dutch curator Willem Jan Renders, a key player in the Centre Pompidou’s upcoming avant-garde exhibit, looked at the links between the works of Chagall, Malevich, and Lissitzky. 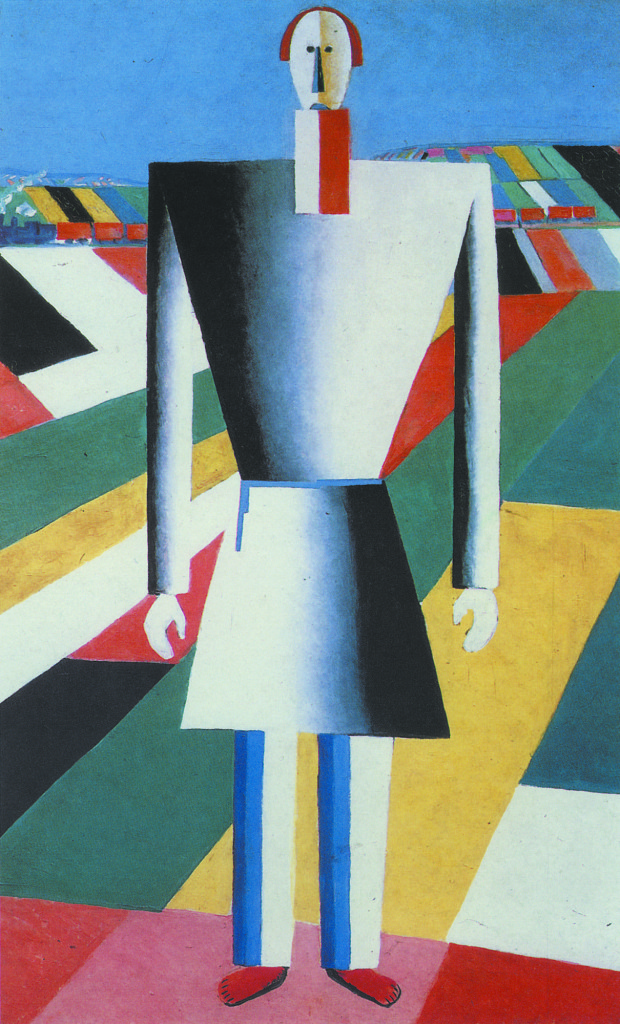 A key strength of the conference was not only its interactive, multimedia nature, but its desire to bring together academics and practitioners from the fields of culture and policy. Once the formal part of the conference closed, organizer Tetyana Filevska brought together experienced players on the Machiavellian chessboard of Ukrainian culture and policy to debrief. The “Malevichemania” roundtable participants included former Mystetskyi Arsenal director Natalia Zabolotna, gallery owner Pavlo Gudimov, and Olga Zhuk who heads the department of cultural diplomacy at the Ministry of Foreign Affairs. Organizers and contributors compared battle scars, recalling the difficulty of raising the funds for such an undertaking and the limited government support available, followed by the realization that the national press outright refused to promote the event. In Ukraine, politics, and not culture, is seen as newsworthy content.

That there is now a discussion taking place to rename the capital’s main airport after him, demonstrates the extent to which the idea of Malevich as canonical Ukrainian artist has penetrated the public imagination. Yet Zabolotna recalled the backlash from policymakers and media intellectuals for whom the idea that “some obscure artist” should be honored with his name on the airport was hard to understand. Meanwhile, the absence of a Malevich monument in Kyiv, brought to the foreground under President Yushchenko, remains tactfully avoided in parliament. A bronze template of the sculpture designed by Igor Grechanyk was informally agreed upon as the prototype, although no provision had yet been made to fund its production and installation. A provisional structure exists in Vladymyro-Lybidska Street in Kyiv, serving as a pressing reminder that the capital could and should do better. Indeed, the destruction of Ukraine’s Lenin statues — the Leninfall — has crudely chipped away at the urban environment of Ukrainian cities, and only in isolated cases has the empty space been filled in a meaningful way. Indeed, Leninfall cropped up again in the discussion when performance artist Alevtina Kakhidze proposed to replace all Lenin monuments of stone with glass monuments, making them invisible, “so that no one should say that Ukrainians don’t remember their past.” It is perhaps ironic that foreigners should make the first steps in bringing Malevich’s Kyiv legacy to the public eye. On February 23rd 2016, exactly 138 years since Malevich’s birth in the very same city, Spanish sculptor Carlos Garcia Lahoz erected a monument to Suprematism outside the National Ukrainian Academy of Arts. Three squares, in red, grey, and black, put 1.5 tons of concrete to good use, making the latest addition to the sculpture park surrounding the academy. However, this is but an artist’s impression of another artist’s oeuvre, and not an official monument to Malevich.

We can only hope that with the advantages that modern technology affords, future generations of scholars and practitioners will have the entire proceedings of the conference in HD quality at their fingertips. Let us think of those untaken seats as not empty, but instead — not yet taken.

Myroslava Hartmond is the owner of Triptych: Global Arts Workshop, Ukraine’s first private fine art gallery since 1988. She is a Research Associate of the Centre for International Studies, University of Oxford, where she explores the role of cultural diplomacy in Ukraine.