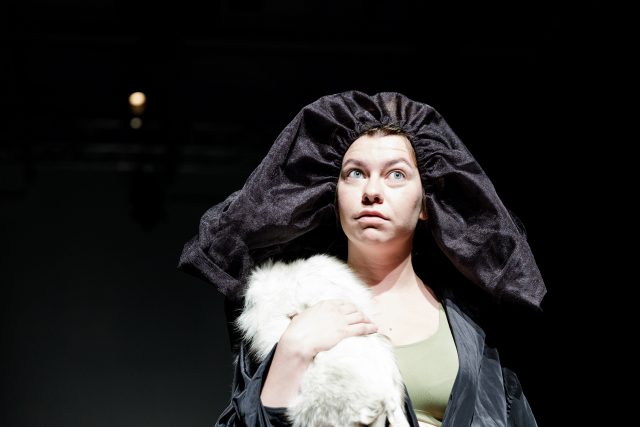 A performer dances alone in silence. Periodically the words “Yes” or “No” sound from the darkened sidelines. The words are familiar but their meaning is not. I search for clues in the dancer’s movements to elucidate what is going on. “Yes” is usually a sign of approval, encouragement, or permission, while “no” forbids or disagrees. They are a common pair of opposites, like light and darkness, life and death, or 1 and 0. Here the words — expressing how the speaker feels at a given moment — operate  autonomously  from  the dancer’s response, which acknowledges but is not dictated by what was heard. TanzLaborotorium’s “Hamlets. Playing Theater” is a game of dissociation, where elements of theater and words are given free play in an experimental setting to see what comes out.

To be, or not to be—that is the question:

Whether ’tis nobler in the mind to suffer

The slings and arrows of outrageous fortune,

Or to take arms against a sea of troubles

And by opposing, end them?

In his famous soliloquy, Shakespeare’s Hamlet ponders the competing virtues of life and death, contemplation and action. His words reveal an eternal human conundrum: whatever we do, whether we choose action or inaction, we cannot know at the moment of decision what the result may be. Centuries later, as the Soviet Union was collapsing, Les Poderviansky, a Ukrainian writer and artist with a cult following, who is known for his use of slang argot, transposed the Prince of Denmark and his existential musings into the modern-day mix of Ukrainian and Russian known as “surzhyk:” “To bathe or not to bathe? … Oh fuck these damn questions!”

TanzLaboratorium’s “Hamlets. Playing Theater” brings the words of both authors to the stage of the Les Kurbas National Theater Arts Center in Kyiv, setting these eternal existential questions in the bare reality of present-day Ukraine. Their experimental work generates even more questions as it dissects certain conventions of theater to get at the essence of play.

The show is composed of scenes with names like “Dialogue”, “Characters”, “Finale”, “Rehearsal”, “Magic”, each with its own internal logic. Audience members who choose in advance to participate are given cards with a digit on either side and asked to show either 1 or 0 every time the house lights go up. The numbers displayed determine which scene will be performed next, which means that the content and order of each performance is unique. Everyone in this theater is an active participant in what will or will not happen, regardless of whether one is in the light or shadow, onstage or off, choosing to be active or passive.

The theater provides the uneasy sensation of being together with people who are each having their own different experiences. The situation evades total control or predictability. Contingency plays a large role, incapacitating the common tendency to interpret events through the direct linkage of cause and effect.

“The  fundamental  problem  of  theater”, we learn later, is the audience. Who, if not they — or rather, each person in attendance — makes sense out of the actions, movements, and sounds displayed in the theater? In “The Emancipated Spectator”, Jacques Ranciere argues against the assumed hierarchy between “active” performers and “passive” spectators. Both parties are equal (which does not mean identical) in the sense that each performer and each audience member enters into the common situation with his or her own existing knowledge (and interests). Each individual also has the capacity to build new connections between this experience and his or her own past experience.

Unlike theater-makers who try to resolve the “audience problem” by destroying the division between stage and auditorium, TanzLaboratorium invites  each  spectator to question his or her own activity without denying his or her special position — that of watching without being seen. Perhaps it is this distinction between visible performers and watchers in the darkened auditorium that helps us to see not one another or somebody’s power but distinct actions, events, words, movements, and thoughts.

This is a show about seemingly endless possibilities. And yet each one is concrete and what happens is what you get. One option  is chosen, but the other possibilities remain almost palpable in the air. “To be or not to be”, is presented not as a choice, but together, somewhat like Schrödinger’s cat in the famous thought experiment — both dead and alive.

Like an individual life, the performance is framed by its beginning and abrupt end. And it is this frame that holds together the seemingly incongruous elements of TanzLaboratorium’s “Hamlets” — fragments  of Hamlet’s original soliloquy (as  written by Shakespeare and later translated by Panteleimon Kulish into Ukrainian and Boris Pasternak into Russian); Poderviansky’s irreverent retelling of the story, colored by Ukrainian obscenities and Soviet-era cultural imagery; a song by underground Soviet prison song balladeer Arkady Severny; and references to John Cage and American postmodern dance. This eclectic self-referential assortment reveals a thread of cultural heritage meandering through time and space, tying together the American tradition of contemporary dance, Soviet criminal culture, late-Soviet satire, and Shakespeare. Here play — whether “playing theater” or playing with the various Hamlets — is an act of engaging oneself in a rich and expansive cultural tradition. The performers are enacting their own personal cultural histories, claiming through their bodies diverse artistic sources as foundational for their contemporary Ukrainian art.

The general setting of “Hamlets” remains present-day Ukraine: to be or not to be. In a scene called “On Air”, a performer sits facing the audience flanked by two others, who simultaneously whisper into each ear Hamlet’s soliloquy in two different languages, and the performer speaks out loud what s/he hears at the moment. When the languages are the distinct but similar Ukrainian and Russian, a confused jumble of words and syllables emerges from the performer’s mouth. It’s as if Ukraine itself were trying (and failing) to speak. The performers switch positions and languages, and a crude image takes shape in my mind: one of a country listening with one ear to advice from the West (in English), with the other to temptations/threats from Russia. It’s caught in the middle with no position, approach, or strategy of its own. It has nothing to say for itself, only a snippet from here, another from there — cobbled together in real time, there is no time to think, it’s an emergency all the time, a matter of survival:

“Hamlets” is a playground for words, starting from the premise that we don’t know ahead of time the right way to say it, but by trying it out and experiencing it, it becomes clear what works and what doesn’t. This is, after all, an experiment. When the audience chooses a scene that has already been played, a performer takes the stage and begins talking about it in his/her own words. These scenes are the most fragile: sometimes when scrambling to think of what to say, flashes of brilliance appear; other times, I am very aware that it’s not quite hitting  the mark. What’s always marvelous is the endless variety of ways that the question can be approached: How can I talk about something that fundamentally evades verbal articulation? Only by saying something else. But what? We never can be sure until the words are already out in the air.

Playing with variations of Hamlet’s existential questions, TanzLaboratorium raises its own: What is theater? How do we play? And it provokes the audience to wonder: What am I doing here?

Does the success of this emancipatory performance undermine its own existence? Have the artists resolved the fundamental problem of theater? Or released it from the theater and into the world?

No, this experimental performance merely emphasizes the voluntary nature of attending the theater. Freedom or autonomy never happen in isolation.  This performance  is a reminder of the many dimensions in which a person is free to attend or not attend, to act or to suffer, to sense but respond in the way that makes sense to him or her right now. Theater is a rehearsal for facing the world in another way.

Larissa Babij is a Ukrainian-American based in Kyiv. She translates and writes about contemporary art in Ukraine.