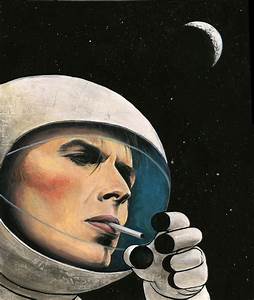 Modern music has always been somehow connected with the topic of space. The phenomenon began when the first ‘electro’ musicians created soundtracks for sci-fi and fantasy films in space. ‘Forbidden Planet’ (1956) was probably one of the first films whose soundtrack was entirely electronic. These so-called ‘electronic tonalities’ were composed by the Barrons. In 1958, getting ready for the launch of Doctor Who,  Britain witnessed the establishment of the BBC Radiophonic Workshop.

By 1966 work had already begun on ‘2001: A Space Odyssey’. This was also the year of psychedelic revolution. Jimi Hendrix, Cream, Byrds, Pink Floyd, the Beatles, and Jefferson Airplane took the anglophone music world by storm. The summer of 1967, aka the Summer of Love, may well be considered the climax of the revolution, when the rock festival in Monterey showed the audience Jimi Hendrix and Janis Joplin. It was the place where the birth of ‘the new people’ was proclaimed. It was an important period for the development of rock music as well as psychedelic sound, the echos of which we can hear nowadays.

The impact of the premiere of ‘2001: A Space Odyssey’ on April 6, 1968, is can’t be overstated. Young David Bowie was so impressed by the picture that he went to the cinema to watch the film several times. ‘It made music fly to me,’ he later remembered. Bowie released what would become his most famous song, ‘Space Oddity,’ on June 20, 1969. One month later, on July 20, 1969, American astronauts Neil Armstrong and Edwin Aldrin landed on the Moon. The event held the world’s media attention and the BBC broadcasted the moon landing live with Bowie’s ‘Space Oddity’.

Nevertheless, it is Ziggy Stardust, his alter ego, that made David Bowie rich and famous years later. This humanlike martian tries to give earthlings hope during his five years here. Ziggy embodies all things that are usually associated with rock-stars: sexual frivolity, drugs, the philosophy of love and peace. Yet in the end he is killed by his drug and sexual abuse as well as his inspired fans.

Around the same time, the english band Hawkwind gave birth to something that would later be called space rock. Their music was nothing but ‘the merciless sound of infinite space’. Hawkwind were eager to collaborate with fantasy writers and tried to flow in the ‘space’ direction. It was a philosophical concept, something like the ship’s logbook, which tells the story of various events at different times and points in space.

The first ‘electro’ musicians quickly made use of the same theme. A German band Tangerine Dream in their album ‘Alpha Centauri 1971’ explored the music of space flight, where quiet and smooth sounds remind us of boundlessness of space. The emphasis was put on the development of keyboard instruments and electronic music. It was distinguished from blues-rock by its focus on dark space sounds rather than on aggressive guitar jam.

This shift in the development of new instruments was crucial and led to the creation of a unique atmosphere, something that the frontman of Edgar Froese later called ‘space music’.

This theme influenced and appealed to many musicians of various genres, from the funk pioneer George Clinton and his beautiful space freaks from Parliament/Funkadelic to the adept of avant-garde jazz Sun Ra. Here is his description of this phenomenon in 1937:

‘My body transformed into something else. I could easily see through myself. And I walked. Having the appearance far from humanlike, I landed on the planet. I thought it was Saturn. I was teleported and landed on the stage with them. They wanted to talk to me. They had something with antennas on each ear. Their eyes had antennas too. They spoke with me. They told me to leave school to avoid further problems. The world plunged into chaos. I had to communicate with it via my music.’

And he did talk to the world, via his music, which was just as crazy as his story. In this way the topic of space changed significantly not only the sound but also the fan scene. The prevalence of space tropes in contemporary rock shows has even set trends in youth fashion.

Music and space exploration have always been ways for people to reach beyond themselves and touch something greater, and so they remain inexorably intertwined.