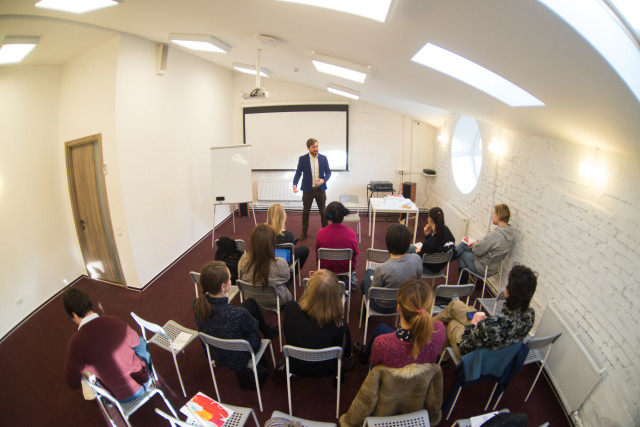 On the weekend of December 16th through the 18th, The Odessa Review held its very first in a proposed series of teaching seminars dealing with contemporary journalistic methods and techniques. The seminar and workshop and took place with the generous assistance of the Danish government’s MyMedia Fund. The Odessa Review gathered dozens of young journalists interested in learning cutting edge literary and journalistic techniques, as well as some who were a bit older but wished to improve their expertise.

We were inspired to initiate this project by the belief that with the exception of the work of a few wonderful institutions, Ukrainian journalistic teaching practices are often antiquated in method and rather narrow in scope compared with modern best world practices. It is well known that Ukrainian journalism is beset by problems of a universal sort for post-Soviet societies, one of which is the difficulty of transitioning from old ideologies to more creative and flexible ways of thinking. Contemporary cultural journalism as it is practiced in the West is very much under-taught in Ukrainian journalism programs.

Also, much of the best teaching takes place in Kyiv, and the regions sadly get much less experience with cross-cultural and interdisciplinary teaching seminars. At the same time, in the present political and cultural environment, it is the regions that can provide the best understanding of Ukraine’s development as a nation, both to domestic and international audiences. The importance of inspired high quality regional journalism in Ukraine cannot be overstated and we hope to continue supporting it in the years to come.

In light of this, we hoped to bring some of our experience with cultural journalism and reporting to the new generation of Ukraine’s young writers and critics.

Our masterclasses on Western journalism began with the very basics – much like the way that journalism is taught in the West – and explored topics such as feature writing, criticism and comparative analysis. The speakers addressing essential journalism practices were The Odessa Review’s Editor-in-Chief Vladislav Davidzon and The Foreign Policy Magazine contributing journalist Ian Bateson (who, like Vladislav Davidzon, is an American). The Ukrainian speakers, chosen on the basis of their being significant Ukrainian cultural figures, included the renowned poet Serhiy Zhadan, the film critic Darya Badior, and the writer and literary critic Oksana Zabuzhko.

It was an absolutely delightful weekend.

The seminar was open for attendance by interested members of the public, and attracted a substantial audience, but the main draw for local journalists and young culture writers was the opportunity to have their work published in English with the editorial guidance of our editors.

The publication of their articles was the main goal of this undertaking. The best six journalists were chosen from those interested in having their work appear in the magazine – it can be seen in the following pages. One writer whose potential and fit for the magazine is judged to be best by the editorial team will have a chance to work with The Odessa Review for the duration of a paid month long internship. We were thrilled with the interest and the high quality of work that the seminars produced, and look forward to carrying out many more.

The following pieces are the work of some of the most promising of the new generation of Ukraine’s journalists.