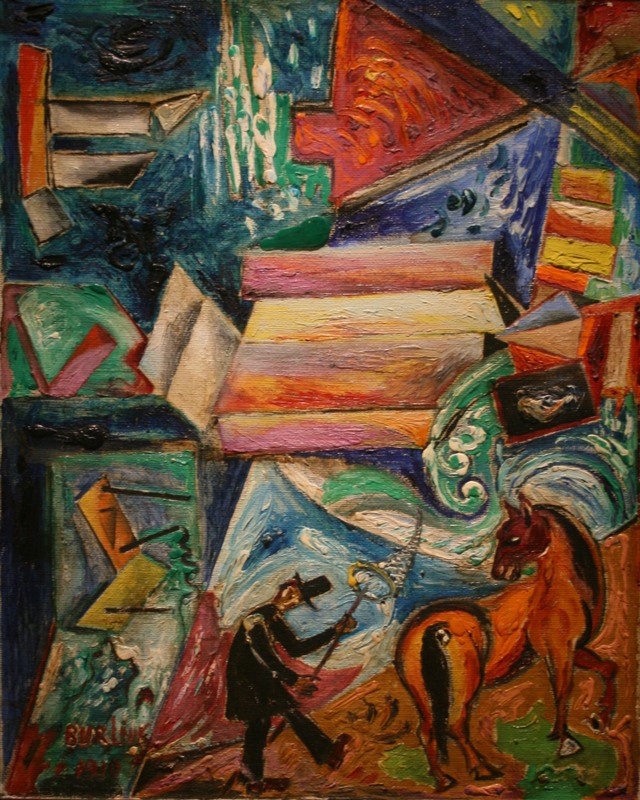 The Burliuk brothers are known as exemplars of high modernism, but the story of the rest of the talented family is less known. This is the inaugural article in Yevgeniy Demenok’s new Odessa Review column on the history of the Modernist movement in Odessa and Ukraine. 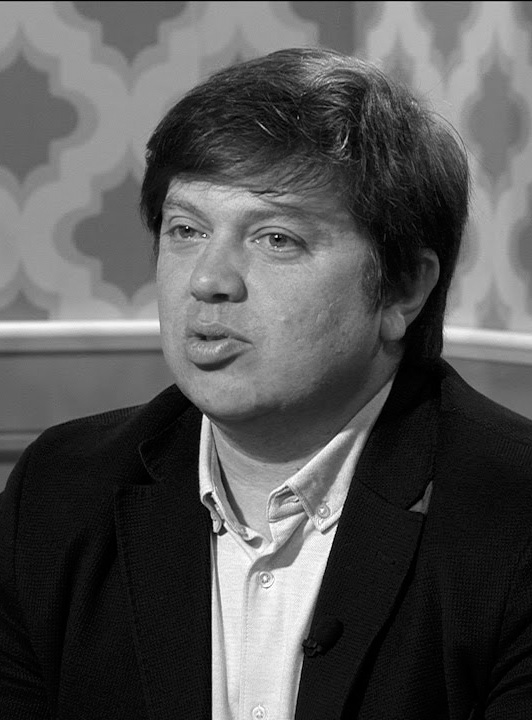 Through the miraculous workings of fate, nearly every significant figure of Russian and Ukrainian Futurism was somehow connected to the city of Odessa. The archetypical futurist poet Alexey Kruchenykh, who was the “father of Zaum poetry”, graduated from the Odessa Academy of Arts. Velimir Khlebnikov visited the city twice and his mother’s family lived here. Vladimir Mayakovsky visited Odessa four times, and it was his infatuation with the Odessan beauty Mariya Denisova that inspired him to compose the poem “A Cloud in Trousers”. The painters Mikhail Larionov and Nataliya Goncharova visited the city yearly throughout the span of a decade, and it was where Larionov created the bulk of what came to be considered his best works. A panoply of Ukrainian Futurists lived and worked in Odessa in the 1920’s, many associated with the Odessa Film Studio which was widely known as the “Hollywood on the Black Sea”. These included such figures as Mikhayl Semenko, Yuriy Yanovsky, Mikola Bazhan, and Geo Shkurupy.

When it comes to the “Father of Russian Futurism” David Burliuk, almost his entire family – six in all – lived, studied or painted in the “Southern Palmyra”.

David Burliuk himself attended the Odessa Academy of Arts, in 1900-1901 and 1910-1911. In 1911 he received his final degree, obtaining the diploma of a draftsmanship and drawing teacher. In 1906 and 1907 he participated in the annual exhibits organized in Odessa by the Southern – Russian Artists’ Society, as well as both of Vladimir Izdebsky’s historically important “salons”. In January of 1914, together with Vladimir Mayakovsky and Wassily Kamensky he took part in two performances at the Russian Theater during the infamous “Cubist-Futurist Tournament”. Many members of the Odessan beau monde could be found among Burliuk’s friends – these included such figures as Isaac Brodsky, Benedikt Livshitz, Vladimir Baranov-Rossine, Mitrophan Martyschenko (who was also known as “Grekov”).

Vladimir Burliuk studied alongside his brother at the Odessa Academy of Arts in 1910. His works were presented at the October 1906 “XVII Exhibition of Paintings of the Southern-Russian Artists’ Society”, as well as at Izdebsky’s “Salons” where they elicited a scandalous response.

Lyudmila Burliuk – the oldest sister in the family – also had her works included in the XVII and XVIII Southern-Russian Artists’ Society exhibitions. According to the Catalogue of the XVII Exhibit, Vladimir had one work in it, David – six; and Lyudmila four. At the following exhibit, David and Lyudmila participated without their brother. David exhibited six works, and only Lyudmila one.

The middle sister, Nadezhda Burliuk, also left her mark on the Odessa art world. Her drawings (created when she was only 12) were exhibited in the children’s section of Izdebsky’s second “Salon” in February of 1911.

The mother of this exceptional family, Lyudmila Iosifovna, also participated in both of Vladimir Izdebsky’s “Salons” under her maiden name, Mikhnevich – her works were hung alongside those of her famous sons. 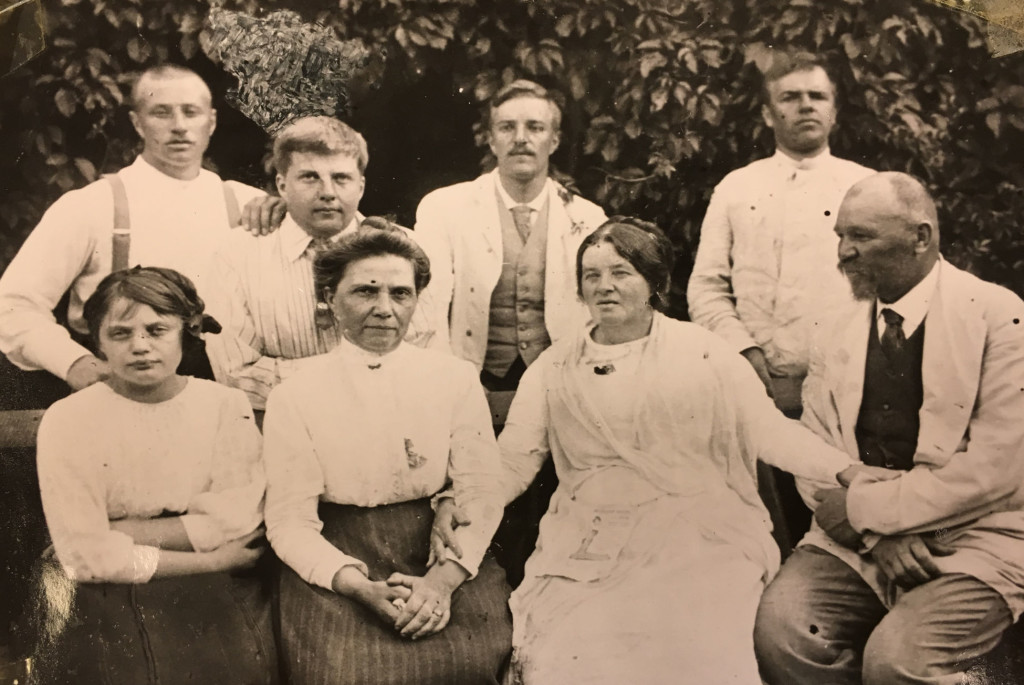 Nikolay Burliuk is the only member of the family who was brought to Odessa through business dealings which were unrelated to art. From 1918 to 1919 he served as signals operator . First for the forces of Hetman Skoropadsky. Afterwards Petlyura, then the White Guard, and he finally ending up serving the Red Army. This entire inconceivable career trajectory took place over just half a year. After serving in the radio division, Nikolay entered the Navy border guard. In June of 1919, Nikolay was discharged and returned to Kherson, where he would die tragically within a year.

And so, we know that six members of the Burliuk family actively participated in the Odessa art world. However, indisputably, the biggest and most unforgettable mark was left by the elder David Burliuk.

In 1994, the St. Petersburg publishing house “Pushkin Foundation” finally got around to publishing David Burliuk’s memoirs under the title “Fragments from the Memories of a Futurist”. The work was submitted to USSR authorities for publishing by the author himself long ago, back in 1929. An excerpt illustrates the excitement Burlier experienced during his first encounter with Odessa :

“In 1902, I was already studying in the Odessa Academy of Art on 25, Preobrazhenska St. (editor’s note: the author made a mistake here – he actually studied at the academy from 1900 to 1901). The summer of 1902 became life-changing for me. I began to paint – once I started, I could not stop. My father David Fedorovich found a good place for me at the “Golden Baulk” estate belonging to Sviatopolk-Mirsky… My father gave me one hundred rubles: I went to Odessa and returned to the “Golden Baulk”; to the shores of the Dnieper with an entire basket of beautiful paints. The night guard would wake me up when the glint of the Ukrainian stars began to fade and a pale mist would flow through the cold of the icy twilight air; and I would run to the shore with my box of paints to paint the spring dawn, the Cossack huts, the distant blue willows, the poplars and the barrows in the steppe’’. 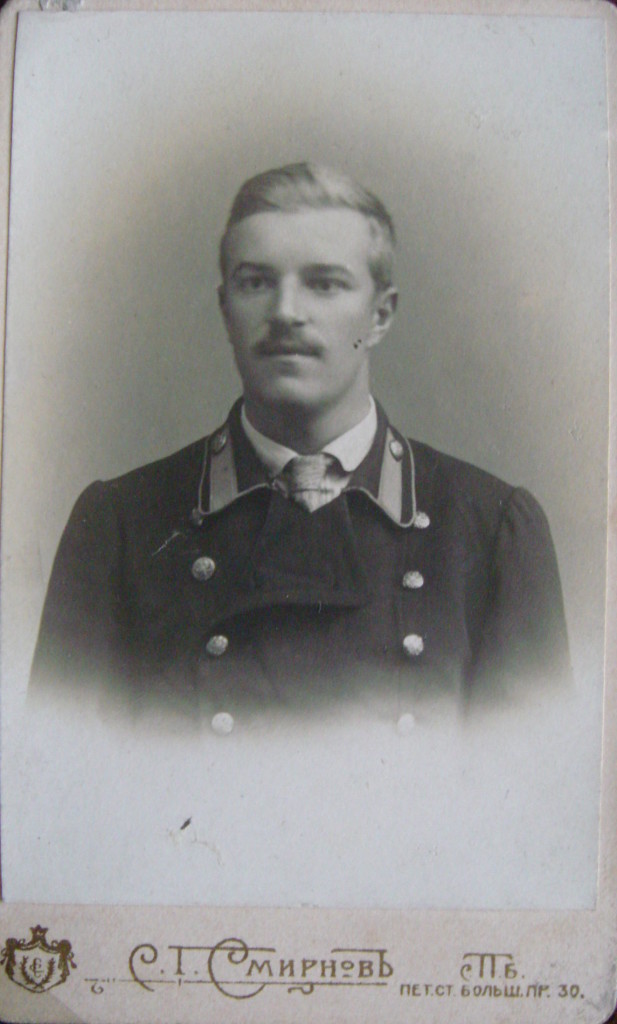 The Odessa State Archive contains some remnants of David Burliuk’s personal file, which states that he is the son of a reserve soldier residing in the Kherson area, an Eastern Orthodox Christian by faith, and that he took and successfully passed the Odessa Academy of Arts entrance exam on the first of September, 1900. The archives further reveal that his grades were mostly average and that he missed exactly 17 class sessions, for which he was disciplined by being transferred to a lower class. He ultimately received his diploma on May 24th, 1911.

David’s diaries also reveal the address of his Odessa residence. Previously, this fragment of his memoirs which was titled “My time at the Kazan Art School” only existed in the form of a hand-typed copy, dictated to Mariya Nikiforovna Burliuk, who would go on to edit it. Most recently, it was published in Nobert Yevdaev’s book “David Burlier in America’:

“My second winter in Kazan (1901-1902). I had spent the previous winter, which was also the second one I dedicated to painting, in Odessa. My father, having received a wonderful place, the estate on the Dnieper – advised me not to go too far away but rather to relocate to the Odessa Academy. I decided to take up his advice.

I went to Odessa. I lived in house number 9 on the Preobrazhenska Street – right across the street from the school. Ten years later, having returned to the Odessa Academy to “receive my diploma”; I went into that same house, went up to that same floor and rented that same apartment because I wanted to fully feel like a student again in that room with embrasure windows where the Vorontsovky lighthouse cast its rays across the ceiling. The floor was crooked – the dumbbells we used to exercise would roll with a great clattering sound across to the opposite wall. Odessa is a port city, all the streets in one way or another lead to the port. It is there where I learned to love the sea.”

The dumbbells referred to belonged, of course, to Vladimir Burliuk – the brother who was almost as well known as he was. David often complained about having to carry his brother’s weights home after he had finished exercising. Vladimir is even depicted holding his dumbbell in a portrait painted by Mikhail Larionov, which is currently located at the Fine Arts Museum in Lyons.

In the fall of 1910 David Burliuk once again enrolled in the Odessa Art Academy. Behind him were years of studying at the Kazan Art Academy (1899-1900 and 1901-1902), an unsuccessful attempt to get into the St. Petersburg Art Academy in 1902 (his sister Lyudmila succeeded), and studies in Munich and Paris. It was also together with Vladimir that David returned to study at the Odessa Art Academy. Both brothers had good reasons for returning: Vladimir needed to somehow escape military service, and David desperately needed to receive a diploma which would grant him access to teaching jobs.

David understood that without his completed arts degree, he would never have any professional status and it would be very difficult for him to make a living. The proceeds from selling his paintings were very modest and so he made a firm decision to finally complete his degree.

“…Volodya and I spent the winter of 1910-11 studying in Odessa, where I finally received my diploma from the Odessa Academy of Arts which gave me the right to teach art in intermediate educational institutions. In Russia, earning money without a diploma was unthinkable” – David wrote in the 55th edition of the “Color & Rhyme” magazine.

David also frequently mentioned his acquaintanceship and collaboration with Wassily Kandinsky in his writings: “In 1911, I finally graduated from the Odessa Academy of Arts. It is here that my connection with Munich was forged: “Der Blaue Reiter” and Wassily Wassiliyevich [Kandinsky].”

In his book “Fragments from the Memories of a Futurist”, he wrote: “The summer of 1910 turned out to be far more radical. The best Neo – impressionist studies of the Dnieper have already been painted here. Mikhail Fyodorovich Larionov, as well as Lentulov, came to stay and work with us for a while… A similar style of work is reproduced in Kandinsky’s “Der Blaue Reiter”. In the fall, here in Odessa on 9 Preobrazhenska St., Wassily Kandinsky briefly visited us – after that we joined him in proselytizing the new art in Germany”.

The Odessa house in which David and Vladimir Burliuk lived remains in almost pristine condition to this day. A memorial plaque will soon be placed on its façade, marking it as the former residence of the “Father of Russian Futurism”.