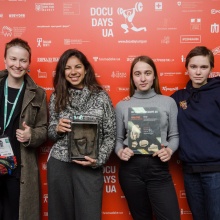 March 30th was the last day of the 15th International Human Rights Documentary Film Festival in Kyiv. This year participants included 62 films from 36 countries, 11 of which were Ukrainian. The topic of the festival was “equal equalities,” and the common thread was the idea of protecting women’s and children’s rights. Despite the great number of motion pictures, a distinct thematic division fell between the two main program blocks: the non- competitive program films all focused on the issues of gender-, nationality-, religious-, and sexuality-based discrimination, while the competitive ones emphasized little-known aspects of military conflicts. For instance, the unexpected highlights included female soldiers experiencing post-traumatic stress disorder and the intimate family world of front-line towns in Eastern Ukraine.

War has not only a male but also a female face. “No Obvious Signs” by Alina Gorlova (Ukraine) convinced the audience of this. The film tells us the first-person story of Oksana Yakubova, a top Ministry of Finance economist who decides to go to war in order to save her son and husband from mobilization. Having served for three years in the Anti-Terrorist Operation (until recently, Ukraine’s name for the conflict in the Donbas), Oksana comes back home but is unable to find happiness and comfort in a peaceful life. Gorlova’s film is sort of a cinema-diary of Oksana’s states of being, documenting the slow process of recovering from PTSD. The abundance of close-ups, the heroine’s quiet voice and the on-screen intimacy makes every viewer feel like a confessor or a therapist. On the whole, you can sense that the film is emotionally static, and the character choice is socially and politically calculating. Nevertheless, Gorlova’s film was not only awarded the first prize in the “DOCU/RIGHTS” category, but also received a number of encouragement prizes, including free distribution at fifty festivals from the “Letter to Fest” company and $5,000 from the “Current Time” channel, a media partner.

A victory like this should be regarded as a way of drawing attention to a topic that hasn’t been actively discussed before. The monetary prize will be fully spent on the rehabilitation of women with PTSD. Oksana Yakubova herself was awarded a new festival prize, which from now on will be given annually to the most interesting documentary subject, as well as an award from the Ukrainian Helsinki Human Rights Group, the festival’s co-founder.

An important event for the festival was the “DOCU/Ukraine” contest, the first in 15 years featuring only full-length films. Four films out of 6 were dedicated to current political topics, like decommunization — “Almost 10,000 Voters” by Uliana Osovska; the issue of historical propaganda — “The Cacophony of the Donbass” by Igor Minaiev; and memory of the heroes of Euromaidan — “The First Company,” which won directors Yaroslav Pilunsky, Yulia Shashkova and Yuriy Gruzinov the “Audience Award”. In the main competitive nomination, Masha Kondakova’s “Women in War”, part of the general gender equality tone of the festival, seemed a likely winner. Yet the “DOCU/Ukraine” jury, chaired by Lithuanian documentary master Arunas Matelis, proved itself to be totally impartial and awarded the prizes to the most experimental pictures.

For example, the grand prize went to Dmytro Lavrinenko’s “Whereufrom” about Zhenya, a 45-year-old streetsweeper. Despite having a green card and a mom living across the Atlantic, Zhenya sweeps the streets of Kharkiv and collects Soviet junk. In his spare time, he dreams of meeting his love and films himself and potential fiancees with his phone’s camera, while the director films Zhenya. The result of such co-authorship is a very funny and curious film. One can feel that Lavrinenko is absolutely charmed with his hero’s non-conformism, yet he sincerely worries about him. Lavrinenko passes this feeling to the viewers, too. Yet the finale, scenes of the Kharkiv Maidan, looks somehow different: one can sense that the Revolution of Dignity affected the director but didn’t touch Zhenya at all. His reckless life goes on with laughter, but remains totally indifferent to the urgent concerns of the day.

A parallel and eclectic dimension can be seen in the “DOCU/Ukraine” Special prize-winner, the intricately titled “Enticing, Sugary, Boundless, or Songs and Dances About Death”. In terms of its structure, the film by Tania Khodakivska and Oleksandr Stekolenko resembles a patchwork blanket made of vibrant moments of reality. It’s a plotless three-act film reminding us, through hedonism and beauty, about the transience of life. In the “Enticing” chapter, we find ourselves in Pennabilli, Italy, where we overhear a conversation between two widowed muses — Lora Guerra (the widow of Tonino Guerra, a famous poet and screenwriter) and Enrica Antonioni. In the “Sugary” Chapter we travel to remote Carpathian villages where people are happy about the very fact that their children weren’t eaten by wolves on their way to school. And “Boundless” brings us to a Georgian funeral feast. It is a truly stunning, yet generally formalistic film that makes you think about the transience of being, less so with its direct meaning than with the mystical beauty of everything happening there.

The “DOCU/World” prize went to “Sand and Blood” by Matthias Krepp and Angelika Spangel, a film about the Syrian civil war. The film, fully cut together from witnesses’ amateur videos, allows a broader look at the issue thanks to refugees’ behind-the-scenes comments. Even more powerful and thrilling for the audience was watching Feras Fayyad’s non-competitive film “Last Men in Aleppo”, which had already become one of last year’s “Sundance” winners. The film is about real Syrian heroes — the “White Helmets” organization, whose members voluntarily rescue their compatriots from under the rubble of bombed buildings — shocked the public. For the first time at the festival, the audience didn’t clap or leave before the titles ended. Dreams of peace and family happiness remained unfulfilled for the film’s subjects but, perhaps, they will come true for their children.

Simon Lereng Wilmont, a Danish director, showed the child’s face of war. His “The Distant Barking of Dogs” fascinated not only the festival’s student jury, which awarded him with their own Grand prize, but also the audience. Ten-year-old Oleg lives in a front-line Donbas village and is used to sleeping while shells explode outside his window. Together with his little brother, he enjoys swimming in the river and learns about good and evil by firing a gun at frogs. This is a story of an illusionary, almost utopian world of childhood, where sometimes even war cannot ruin simple pleasures.

And war also cannot prevent people from remembering who they are. And we see an incredibly touching expression of this idea in “Mustard in the Gardens”, a short by Ukrainian director Piotr Armianovski. In this film, a girl named Lena travels to her hometown in the Donbas region’s “grey zone”, a place trapped between the two sides in the war in Ukraine. An old photo album, a garden in bloom, and her mother’s grave lead her to indulge in melancholy and sweet childhood memories. This film about the power of memory was awarded the Andriy Matrosov prize, which is given annually to the festival organizers’ personal favourites in memory of their late friend and “Docudays” co-founder.

The “DOCU/Short” category winner sparked sincere laughter in the theater. “Film for Carlos” by Guatemalan Renato Borrayo Serrano was made as the director’s response to the individual racism and chauvinism of his new Russian mother-in-law. “Aunt Swallow”, as her own husband calls her, is very sad about the fact that her newborn grandson bears an exotic name Carlos and is dark complected. Yet Renatto himself isn’t mad at her. First and foremost, this film is made with love, in honor of a newly born human being.

Summing up the 15th “Docudays” festival, we can say that the digital era shortened the distance between an author and his or her subject. This is the case not only for “Whereufrom”, the winner or the Ukrainian contest. It’s also true for the non-competitive program. It is difficult to imagine what kind of film Vit Klusak’s “The White World According to Daliborek” would be if it didn’t include the amateur horrors created by the main character, a forty-year-old neo-Nazi still living with his mother despite his exaggeratedly masculine lifestyle. Or “I Am Another You”, where a homeless hero documents how Nanfu Wang, the director, eats pizza from the trash for the first time.

Today, thanks to portable technologies, the subjects themselves become co-creators of the film more and more often. As for Ukrainian documentary filmmaking, we can say that the subject of the Donbas conflict has become relevant again after a year of silence. That means it requires rethinking. But beyond the existing problems, this new vision fortunately has a place for reassuring stories which comfort us with the knowledge that, even in the middle of war, one can find a patch of serenity and peace.