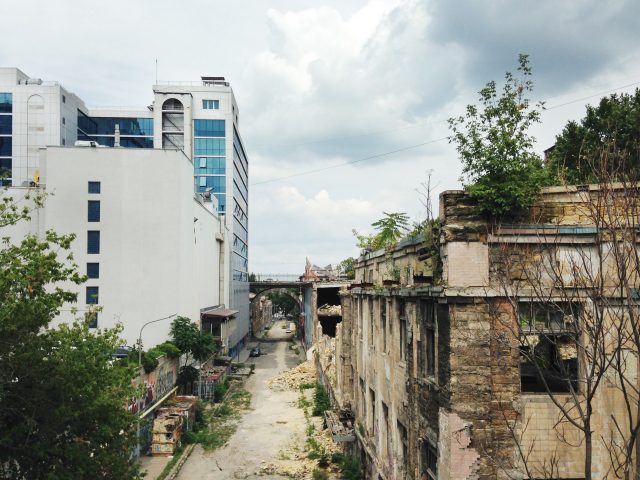 It is almost as inexplicable as it is ubiquitous. Human beings who are actively striving to build lives of greater health, wealth, and comfort are fascinated by the very symbols of life’s collapse: ruins. Whether the remaining columns of an ancient Greek temple, the collapsing walls of a factory in Detroit or the soot-stained cement of a decaying Soviet high rise building in the Ural mountains, ruins — both occupied and abandoned — call out to us. Exactly why this is so is another question.

Scholars have long debated the social meaning of decay and disrepair. Denis Diderot, the 18th century French philosopher, rhapsodized about the painter Hubert Robert’s depictions of ruins: “Everything is obliterated, all perishes, all passes…Time, is all that remains”. For Diderot, ruins provoked contemplation of the transience of all that seems permanent.

More recently, the British geographer Tim Edensor has written that industrial ruins “open up possibilities for regulated urban bodies to escape their shackles in expressive pursuits and sensual experience”. The writer Jacob Makinowski suggests that ruins’ appeal has “something to do with time, and our yearning for an experience of it that goes beyond regular human experience”.

The thing that most or even all the so-called “ruinologists” seem to agree on is that the key to the appeal of ruins is the impulse to escape. That may explain their popularity on the internet, which is likely the most bottomless pit of escapism and voyeurism. With the growth of online media, the photographic genre of “ruin pornography” has become a surefire recipe for clicks. Yet the popularity of ruin porn has also attracted harsh criticism from those who view it as an aesthetic form of worshipping poverty. When it is Westerners who partake of such photos shot behind the old Iron Curtain — one of ruin porn’s favored regions — critics allege that it fetishizes the Soviet collapse. 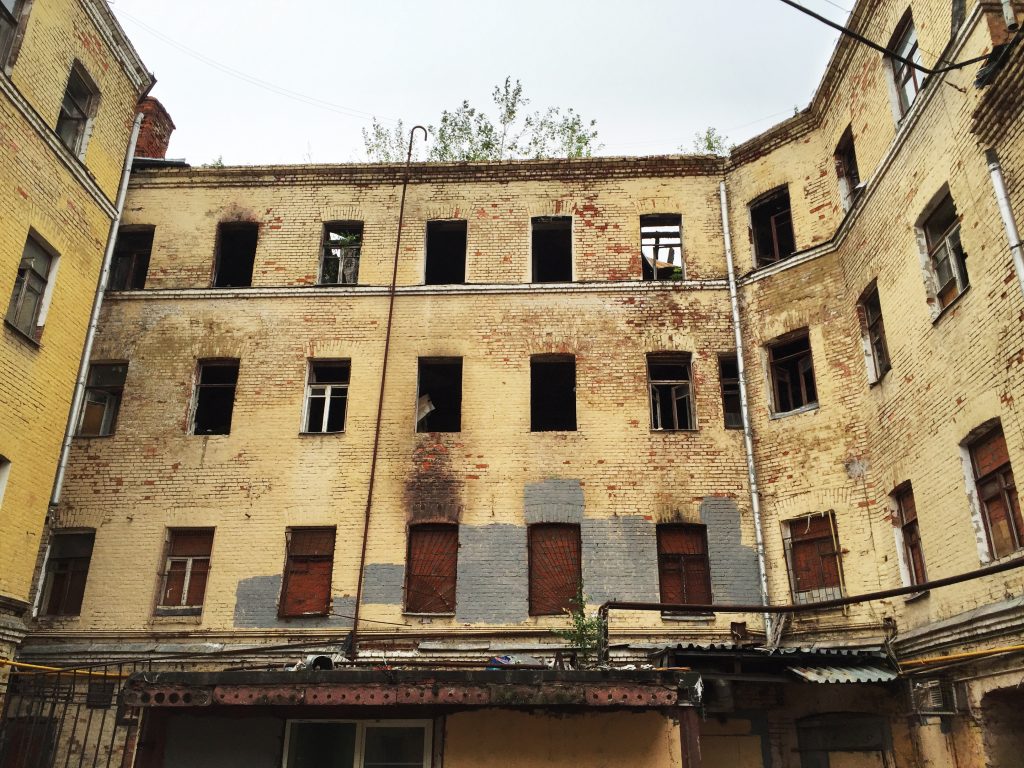 Much like pornography, yebenya is difficult to define, but it is unmistakable when encountered. Derived from the obscene Russian verb “to f***” (yebat), yebenya refers to several varied occurrences at once. Primarily, it is the place where one encounters architectural (and likely social) decay. Yebenya is frequently remote and usually appears to be abandoned. Often, it is found on the edge of the city or in a far-flung village.

But that is not always the case. Yebenya can sometimes be located in the city center if it reflects the yebenya aesthetic. And the word itself can sometimes refer to the crumbling structures themselves, not merely the place. As with any concept that lacks a codified definition and spreads over the internet, yebenya’s boundaries are often fuzzy. Some people refer to the old neighborhood where they grew up as “my yebenya”.

What is perfectly clear is yebenya’s popularity. The Facebook group Estetika yebenei (“The Yebenya Aesthetic”), which posts photos (usually) from the post-Soviet outskirts, has over 58 thousand likes and 68 thousand followers. Similar pages exist on the Russian VKontakte social network and Twitter. Yebenya is also a popular hashtag on Instagram (#ебеня), sometimes combined with another of the internet’s favorite subjects: cats.

The photographs internet users categorize as yebenya are diverse, both geographically and subject-wise. Some depict ramshackle wooden huts on the barren, snow-covered steppes of Siberia. Others showcase the grimy cooling towers of a thermal power plant in the Ukrainian city of Dnipro. Still others focus on the numerous crumbling apartment buildings.

But, as unlikely as it sounds, a conception of beauty is the key to the yebenya aesthetic. The very appeal of the phenomenon is in finding beauty where it is least expected. In this regard, yebenya is the opposite of a Thomas Kinkade painting: the scenery is beautiful and often rustic or provincial, but there is no cloying sentimentality, no moralizing here. 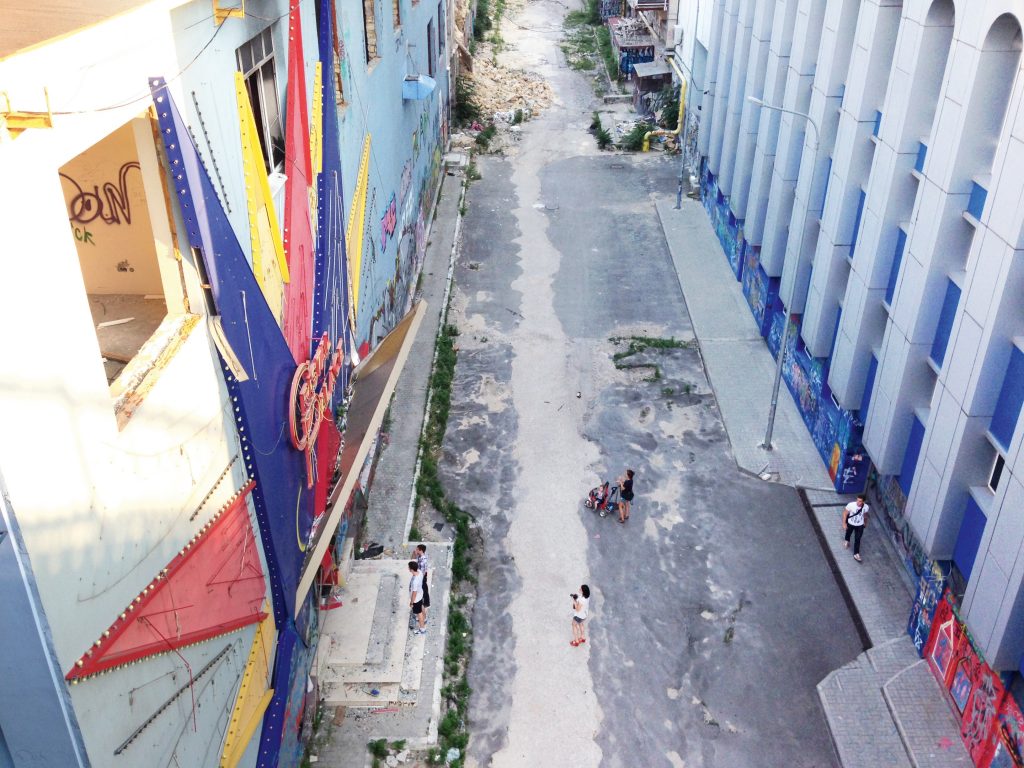 Ironically, that search for beauty in collapse increasingly attracts moralizing — albeit much more frequently in the West. Writing for the American journal Jacobin, Dora Apel criticizes ruin pornography focused on Detroit for its failure to explain urban decay. Such photographs “allow the real agents of degeneration — corporations and the capitalist state — to evade responsibility” for collapse.

Citing a photograph of trees growing up from a floor of decaying books in an abandoned Detroit public school book depository, Apel writes that the “metaphor of nature reclaiming the city, whether used in negative or redemptive terms, neutralizes the actual processes that have had such a destructive impact on the city: virulent racism, anti-unionism, and industrial restructuring”. 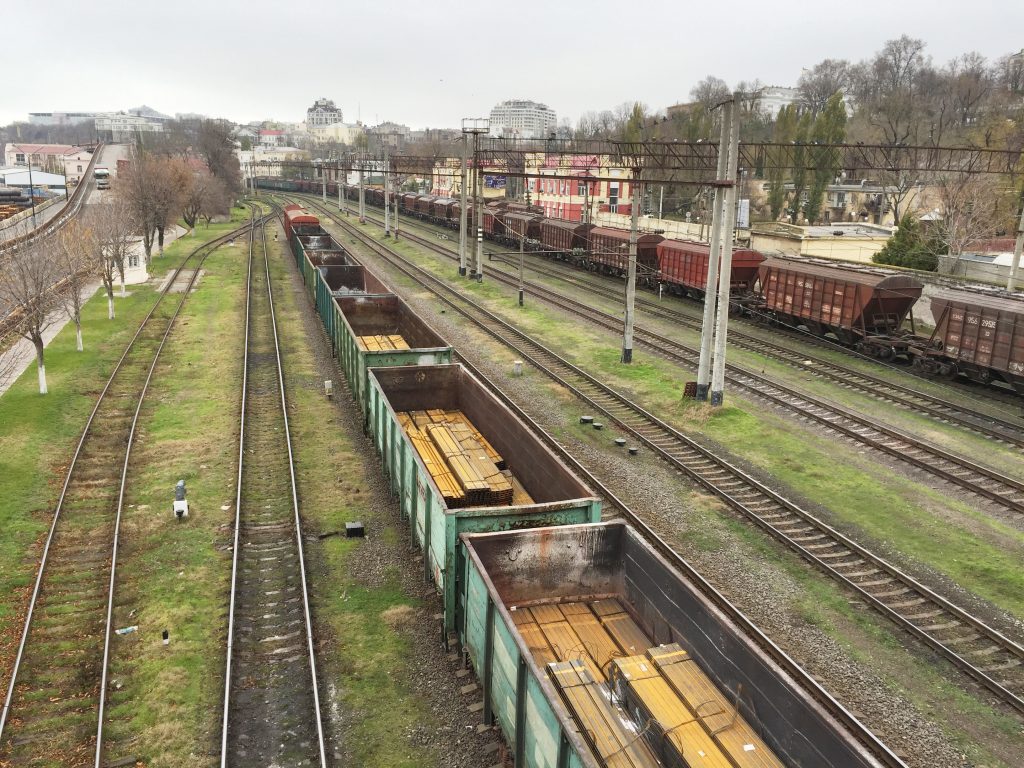 Vorotniov notes that the architectural heritage of Ukraine’s most prosperous cities is gradually being destroyed, while new construction projects often display terrible taste. This gives urban decay a “neurotic character”, while provincial decay appears more natural. Either way, for him Ukrainian engagement with it is not pornographic in character. Rather, “admiring yebenya is [a process of] gradually getting used to and adapting to that which you see everywhere when you leave your house”, he told The Odessa Review.

This is an important point to keep in mind, as in much of the the post-socialist world, decay is widespread. It is the set on which the play of life is performed. Buildings that look nearly like ruins to outsiders may be happy homes for their residents. The apartments inside may be comfortable and modern, while the shell of a building crumbles. In outlying regions of Kyiv like Bortnychi, new, comfortable apartments and mini-mansions stand next to scrapyards. The post-Soviet space blurs the lines between a ruin and a building.

Leonid Marushchak — a curator of artistic projects at the Ukraine Crisis Media Center who has traveled throughout Ukraine’s eastern industrial heartland — expresses sentiments similar to those of Vorotniov. He suggests that photos of yebenya are popular for showing the scenery as it is. After all, “there won’t be a Miami in the Donetsk or Luhansk regions in the next ten years”, he says.

Marushchak also believes that social change is leading to greater interest in 20th century landmarks. Ukraine’s industrial landscape is disappearing and its factories are closing. Meanwhile, Ukraine’s decommunization drive is making important changes to the society, but is likewise concurrently harming precious works of art, he says. That process has sparked new interest among researchers to study the art and architecture of the Soviet period.

This interest, Marushchak says, is distinctly not political — despite Ukraine’s politicized efforts to break from its communist past. “My colleagues and I have a sincere interest in these places”, he says. “We go to research them. We’re not trying to politicize them”.

But for some people in Ukraine and Russia, yebenya can be political — but ironically not in the way that many ruin porn critics believe. The Russian-language VKontakte and Facebook pages Zagnivayushchiy Zapad (“The Rotting West”) are determinedly turning photographs of post-Soviet decay into apparent statements of protest against living conditions in the post-Soviet space. A recent post on the Facebook page depicts a decrepit Soviet automobile painted with the word “Bentley” in the Cyrillic script. The accompanying caption reads: “Parking for Google employees. They buy up expensive cars and drive [to work], while living in rented apartments far outside town. San Jose, Silicon Valley, USA”.

The social commentary here is multilayered. The first layer is obvious: This is not Silicon Valley. This is the ex-USSR. In Silicon Valley, one would never find a car or a parking lot that looked this bad. But the second layer is more nuanced. The San Francisco Bay Area is known for its astronomical housing prices, forcing some people employed there to live far from work. Zagnivayushchiy Zapad is criticizing living conditions in the post-Soviet space, while simultaneously mocking America’s “first world problems”.

But is it truly political? Anyone who has spent time in post-Soviet countries will tell you that there is no shortage of irony about the quality of life there. But that irony does not necessarily transform into serious engagement with the greater political questions affecting life. Humor, irony, and sarcasm are a refuge from the dissatisfactions of life — but, often, nothing more. 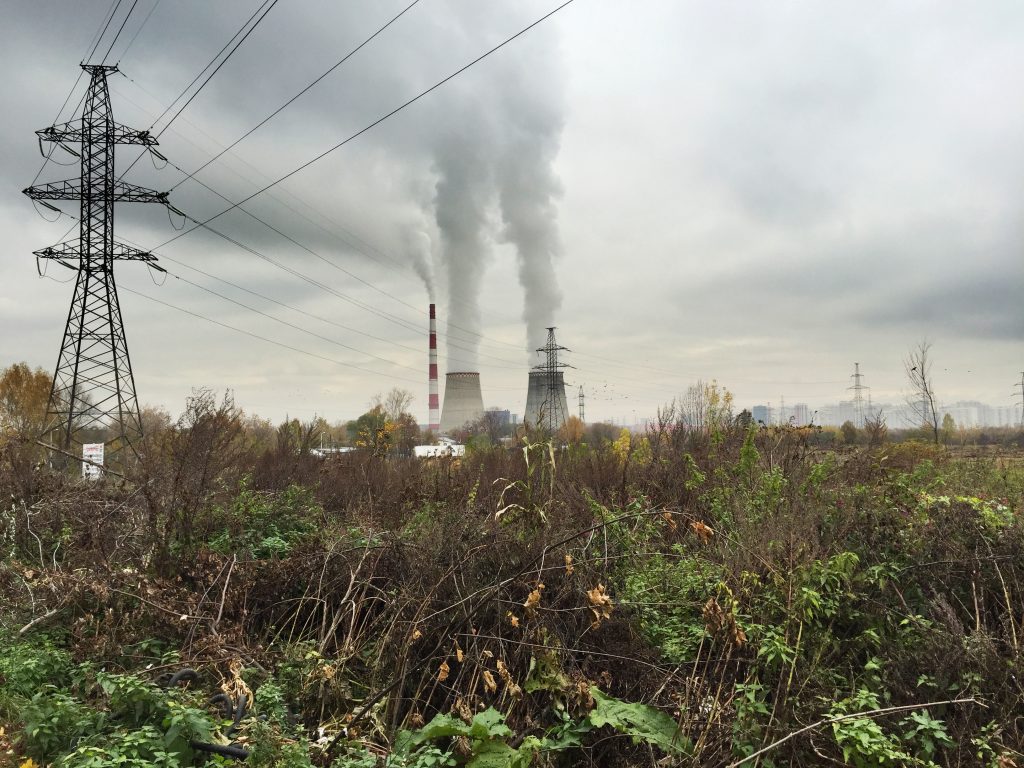