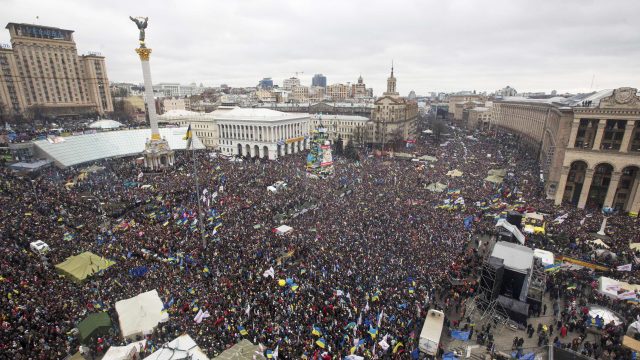 To understand the position of Jews in modern Ukraine, you must first understand what the 2014 Euromaidan Revolution meant for Ukrainians of all ethnicities.

This article was originally written in March 2014 in the immediate wake of the Euromaidan Revolution, it has since become a keystone text for discussions of the relationship between Ukrainians and Ukrainian Jews.

In 2014, alleging “anti-Semitism on the Maidan” has become one of Russia’s main propaganda tactics for discrediting the Ukrainian pro-democracy protest movement. Even top Russian officials, like Foreign Minister Sergei Lavrov, promoted these accusations. Former Ukrainian President Viktor Yanukovych, who was ousted by the protests, also raised the issue in his last press conference.

Claims of anti-Semitism on the Maidan have proven fairly immune to facts. Neither the presence of Jewish leaders and rabbis at the Maidan podium, nor the Maidan Self-Defense organization’s defense of synagogues, nor the “Jewish Hundred” unit defending the Maidan and the deaths of Ukrainian citizens of Jewish origin during the crackdown seems to disprove these claims.

For this reason, I will not attempt to refute the Kremlin’s propagandists. To understand the position of Jews in modern Ukraine, you must first comprehend what Maidan was — and what it meant for all of Ukraine, its minorities, and its Jews.

If we agree with the idea that Maidan has become a powerful impetus for the formation of of a modern Ukrainian political nation, then we must also understand that this nation does not have ethnic boundaries — much like, for example, the modern French political nation. French Jews, despite the anti-Semitic excesses of the past, have long felt themselves a part of the political nation precisely because it erases ethnic boundaries. Anyone who wants to feel French, remain a Jew, or combine these identities has a free hand. But when a political nation is absent, there is no such choice.

Previously, in Ukraine, there were no choices. Prior to the Soviet collapse, both Ukrainians and Jews were perceived as part of a super-ethnicity, “Soviet people”, broken down into republics and national groups. In fact, this concept of “Soviet people” co-quettishly masked the forced gravitation of all other peoples of the Soviet Union toward the Bolshevik manifestation of Russian culture. And if Ukrainians were divided into those willing to accept Russification as a payment for public success and those who aspired at all costs to preserve their ethnic identity, Jews had no choice.

Among the Jewish communities of eastern and central Europe, Ukrainian Jews are an unusual phenomenon — a phenomenon precisely because, for a long time, there have been no Ukrainian Jews. It’s not that they have never existed. Of course, they have. Rather, they became the victims of Bohdan Khmelnytsky’s 17th century rebellion, which nearly led to the complete annihilation of the Jewish ethnic group in modern Ukraine. The new Jewish settlement of Ukraine began after the Russian Empire’s annexation of these lands the rest of the old Polish-Lithuanian Commonwealth.

Thus, the Jews arrived in lands where everything Ukrainian was being actively rejected — and not just by the colonial authorities, but also by Ukrainians who preferred having a successful career to defending their national interests. These new Ukrainian Jews, in turn, were divided into two groups. The first sought to be a part of this “new world” — whether imperial or Soviet — by completely abandoning their national roots. This was the direct path to Russianness. The second group sought to preserve its identity in symbiosis with participation in the life of the state. But this state was never Ukrainian. It was always Russia, no matter how it was masked.

And if the Ukrainians could take the supposed existence of a Ukrainian Soviet Socialist Republic at face value simply because it made it easier for them to accept their servitude, for the Jews this lie was quite obvious and not interesting. So they, like many of their neighbors, became Russian-speaking — even if, in the past, their native language was Yiddish, and their neighbors spoke Ukrainian.

Moreover, it should not be forgotten that the second group of Jews, which sought to preserve its identity, was always subject to attacks from the authorities, much like the Ukrainian national movement faced from Russian chauvinism, both imperial and communist. The Bolsheviks destroyed both the Zionist movement of the Russian Empire and the Jewish Bund, which aspired to national autonomy. Then, it was Jewish, Yiddish-language culture’s turn. The repressions began in the 1930’s. By the last years of Stalin’s life — when Jewish authors were shot and the great actor Solomon Mikhoels was killed — this culture had been largely uprooted.

By this time, those Jews who had not been affected by Russification had almost ceased to exist in Ukraine. Galician and Bukovinian Jews, who had long interacted with Ukrainians, Poles, and Romanians, were completely destroyed in the Holocaust. The Holocaust also ended the existence of another peculiar ethnic groups of Jews who had not undergone Russification: the Krymchaks, who lived in Crimea among the Tatars.

Thus, by the mid-1950’s, the Jews of Ukraine were simply “Soviet people” whose national identity proved to be dangerous for every one of its bearers. Ukrainian identity was similarly dangerous, when not limited to folklore. This fear of being oneself remained with Ukrainian — or, rather, Soviet — Jews until the last days of the Soviet Union. The natural response to this fear was assimilation in favor of the colonizer, the Russian people; repatriation to Israel; or immigration to the United States with its institutionalized Jewish community. But certainly not accession to the persecuted and marginalized Ukrainian national movement.

What changed after the proclamation of Ukrainian independence? On the surface, practically nothing. This independence turned out to be little more than a renamed Soviet Ukraine. Naturally, dependence on the former imperial center decreased, but Russian informational and wider civilizational space remained powerfully influential. And, most importantly, the development of Ukraine as a state continued to be determined by the previous Soviet civilization. Everything Ukrainian was perceived as second-rate and reduced to folklore. The triumph of this perception, paradoxically, arrived just after 2004, when the king of Ukrainian political folklore, Viktor Yushchenko, came to power. The Ukrainians tried to protect themselves from their own civilization’s growing marginalization in their own country through an “ethnic revolution” — which gave rise to nationalist and national-radical political groups and, ultimately, a split between the country’s west and the center, on the one hand, and its east and south, on the other. In other words, the country became divided between the places where the “ethnic revolution” triumphed the regions where Soviet civilization in its crudest, kitschiest forms proved invincible.

What should Jews have done in this alien confrontation? Honestly, nothing. There was practically no influential Jewish community in the country, since the majority of Jews who lived in Ukraine before the early ‘90’s became citizens of Israel, the United States, or Germany. Naturally, the remaining Jews — as it was in imperial times — were integrated into the processes taking place where they lived.

Therefore, the Jews of Ukraine’s western and central regions accepted the revival of Ukrainian culture, even in its ethnic form. And the Jews of the east and south remained the same Soviet people, firmly convinced of their connection with Russian culture and the primacy of this culture above all the others. The fact that Josef Zissels, the president of the Eurasian Jewish Congress, and I were on the Maidan stage is as natural as the fact that Jewish politicians Mikhail Dobkin and Gennady Kernes, the Kharkiv local authorities, became symbols of neo-Soviet chauvinism in its hooligan form.

The Maidan protest movement interrupted this marginal existence. It became a prelude to the assertion of a new political nation and changed everything. Suddenly, it turned out that the Ukrainian flag, anthem, values, and even the slogan “Glory to Ukraine!” were common to all the country’s citizens.

The protest movement, interrupting this marginal existence and becoming a prelude to the assertion of a new political nation, changed everything. Suddenly it turned out that everything in common for all in Ukraine is a flag, anthem, values and even the slogan “Glory to Ukraine!” It turned out that not only ethnic Ukrainians, but also Russians, Jews, Armenians, Belarusians, Azerbaijanis, and Crimean Tatars are willing to give their lives for the country. Yes, this process was delayed in the country’s eastern regions. But now, under the influence of the resurgent “evil empire’s” aggressive policies, it is gaining momentum even in Ukraine’s east. If they are not subjected to Russian occupation, then the modern Ukrainian political nation will be formed there too. And that means one thing: Ukrainian Jews everywhere — as well as citizens of other ethnicities — will become a natural part of the new political nation. Xenophobia and anti-Semitism will be finally marginalized for good — except in the Russian Foreign Ministry’s propaganda.

The formation of this modern political nation worries Vladimir Putin’s regime most of all. Ukraine remained a colony of Russia not because it purchased Russian gas or because its fourth president was a Kremlin puppet, but because the Soviet mentality of Ukrainians correlated to the Soviet mentality of Russians, who were tragically incapable of adapting to modernity. The collapse of the Soviet mentality in Ukraine marks the end of an occupation that has continued since the days of the 17th century Pereyaslav Rada. Ukraine is breaking with the past and beginning to move toward the future.

This is something that the monstrously provincial Russian political elite, Soviet to its very bones, simply cannot understand. Instead, it perceives the modern political nation’s arrival in Ukraine as a grandiose triumph of the “ethnic revolution”. It fails to notice that the “ethnic revolution” has now become just one element of the Ukrainian journey to the present.

Vitaly Portnikov is a Ukrainian journalist.