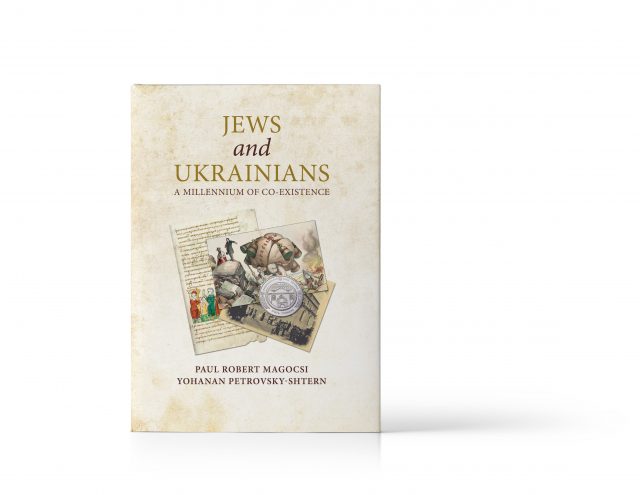 The newly published volume “Jews and Ukrainians: A Millennium of Co-Existence”, authored by the historians Paul Robert Magocsi and Yohanan Petrovsky-Shtern is a prodigious coffee table book dedicated to exploring the common experiences shared by Ukrainians and Jews during a millennium of cohabitation.

They were caught up in the crossfire of revolutions, civil wars, and invasions on the backdrop of disintegrating and consolidating empires. It is no secret that the last hundred years have not been an easy one  for Ukrainians, Jews, or for understanding between them. The Ukrainian-Jewish relationship has undergone myriad and substantive traumatic experiences. The after-effects of that trauma have undoubtedly led to occasions of fraught relations and hostility between the two groups.

With imperialism, communism and fascism causing grievous injury to both peoples, and some representatives of each group having taken part, negative impressions and systematic stereotypes about the other have developed on both sides. A corrective to this unfortunate state of affairs has long been necessary.

The very first thing that should be said about this book is that it is unambiguously the first of its kind. The book represents a noble and useful attempt by the authors to acquaint Jews and Ukrainians with the basic and irrefutable facts of their symbiotic co-existence and oversize contributions to each other’s culture. It is a rare thing to be able to create a new literary genre, and, in many ways, it is rather odd that no one had previously attempted to write a large-scale, interdisciplinary history of the Jewish-Ukrainian relationship. The focus of the book is on dispelling stereotypes, myths, received ideas and pernicious clichés that Ukrainians and Jews may have come to hold against each other.

Throughout the text, the authors make it clear that, often, the issues of distrust, myth and miscommunication grow out of having literally moved apart. Rather than the Ukrainians and Jews who live together on the territory of Ukraine and interact daily, it is third- and fourth-generation Ukrainians and Jews living in the diasporas — and living, as all diasporas invariably do, through nostalgia and memory — who have come to harbor stereotypes and misperceptions about the other.

Arranged in twelve thematic chapters, the book explores in detail Ukrainian geography, history, demography, music, religious change, linguistics, literature (and literary cross pollination), art history, architecture and politics. The history of the lands of contemporary Ukraine, divided historically between German, Polish, Russian, Hungarian and Romanian rulers is extraordinarily complex, and explaining which part was ruled by whom is doubtless not an easy task. There is a great deal in this volume about sculpture and church architecture alongside pictures of upright Polish Counts, galloping Cossacks and dashing Jewish officers in Ukrainian army formations. There is something for every sort of reader.

The book features 335 color illustrations and several dozen original maps, which are remarkably useful in understanding the geopolitical and cultural  implications  of the many shifts in the historical boundaries of the countries and empires that included and controlled the lands of the contemporary Ukrainian state. The volume is divided into chapters such as “Jews during Ukraine’s revolutionary era”, the “Economic life and interaction with Jews”, “Jewish orchestral and operatic music” and “Jewish-Ukrainian literary cross-fertilization”.

Any popular study of a thousand years of joy and grief will always be selective, and will be open to accusations of omission. Such criticisms would be legitimate, but  they are surely also beside the point. Wisely and understandably, the book strikes a positive note, and makes no pretense of being a deep historical investigation of the most complex and divisive issues. The deepest expert studies of those issues await another volume. This book is an extremely important contribution to the Jewish-Ukrainian dialogue. It is an important source for someone wishing to wade into a varied and complex history and represents a step in a journey of reconciliation and mutual understanding.