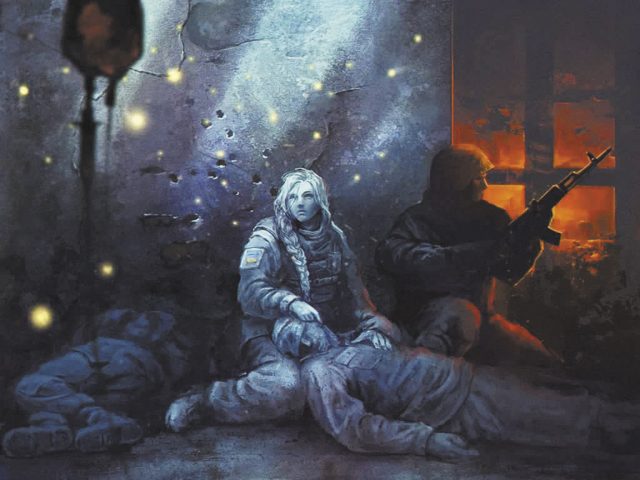 Daryna Rudyk saw many friends die in the war. Now she wants to help people make the most of each moment on earth with the online multimedia art project 13project, which is based on her wartime diaries being illustrated by Ukrainian visuals artists.

Daryna Rudyk has a theory: Up in the sky, there’s a big white table, and all the boys who died in the war sit around it. At dawn, one of them switches on the bright lamp on the table. He wishes Rudyk a good morning and tells her to live well that day. In the evening, a different soldier shuts off the lamp, wishes her good night, and tells her to rest up for another important day.

“The boys watch over me. I can’t let them down,” she says.

It is understandable that Rudyk often seems to speak in spiritual terms. At only 25 years old, she has been through a lot. She has seen bullets tear through flesh and has watched her comrades die. She has lived in the echo chamber of shelling along the front line. And she has waited out the interminable and decidedly more frightening silence between the artillery salvos.

In autumn 2014, Rudyk joined the Ukrainian Army, motivated by a desire to take action and better her country. She spent a year serving as a medic in the 24th Separate Assault Battalion — better known the Aidar Battalion — outside the village of Shchastya in Ukraine’s occupied Luhansk region. Shchastya is well known for being a scene of major fighting. Now, after returning to civilian life, she has set her sights on another goal: healing the wounds left on the body of Ukrainian society by three years of war. 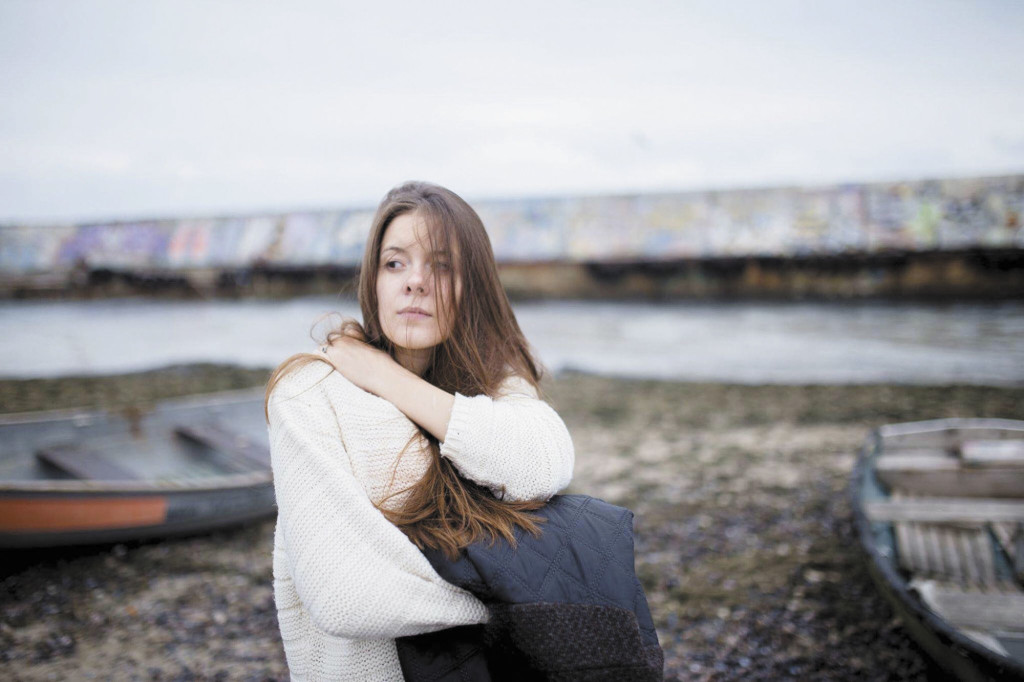 Rudyk is not a doctor by education. But she comes from a medical family, and learned much about healing from her relatives. What’s more, on the front line, most soldiers die from a lack of basic first aid to stop the bleeding, she says. Sometimes, the most important treatment she could provide was simply to sit with a wounded comrade.

These personal encounters with death have shaped and informed Rudyk’s priorities. In 2016, she launched 13project, an online multimedia art project whose name refers to an extra month in the year — which represents additional time for an individual to think, reflect, and feel. On its surface, 13project is a simple concept. During her year in the army, Rudyk kept a written journal of her thoughts and emotions. After returning from the front line, she decided to go public with it.

“So many of my friends can no longer live, but I have a chance,” she told me in a cafe near Kyiv’s Golden Gates. “For that reason, I knew I must publish my writings from the front.”

Taking her journal, Rudyk compiled thirteen short texts. She then found thirteen Ukrainian visuals artists online and asked them to illustrate one piece each. Miraculously, they all agreed. She also found actors and singers to create audio recordings of her texts. She published the recordings and images on Facebook and Soundcloud. The first text came out in October 2016.

The end result is a multimedia reflection on war, the experience of the front, and the emotional tug of home.

“Each person has two reservoirs: happiness and pain. My reservoir of happiness was filled from childhood — with the scent of Grandma’s apple pies, china dolls, dresses of incredible beauty, snowball fights with Grandpa,” begins one of Rudyk’s favorite texts, the thirteenth, which she recorded herself.

But at the end, it takes a more serious turn: “I wear body armor weighing 13 kilograms, plus all the equipment. I shoot from a Kalashnikov. I can amputate an arm or a leg. I can cook borscht and make cherry dumplings. I can drag a PK machine gun and load magazines with my eyes closed. But every time I’m under shelling, I dial the number: ‘Hey, Grandma! We’re safe, everything’s great. The boys say hello. I love you! I’ve eaten. Give the phone to Grandpa. Gramps, I love you! Everything’s tolerable. I got my military ID. Well, that’s all! Bye!’”

As a work of art, 13project straddles the boundary between the mundane and the spiritual. While serving on the front line, Rudyk says she often dreamt of fresh water, clean clothing, and a hot shower — conveniences you come to appreciate more during war. But she also made a list of people to whom she needed to say something important, and she called her loved ones frequently.

“In war, you understand that tomorrow may not happen. In five minutes, you may be gone,” she explained. “You try to live each minute productively.”

This insight forms the core message of 13project. Rudyk has stared into the abyss of death and through her writing, she wants people to see what war is and to create a forum for discussing it. She hopes to motivate people to take stock of their lives, to appreciate the beauty of the moment, to call their parents, and hug their children.

Maybe the project will motivate someone to join the army, she speculates, or maybe someone else will choose to return to civilian life. Rudyk isn’t particularly worried what specifically her audience chooses to do. For her, the most important thing is for them to reflect, to take pleasure in the moment, to realize what a beautiful thing it is to be alive. “You have an opportunity to make changes yourself,” she concludes. 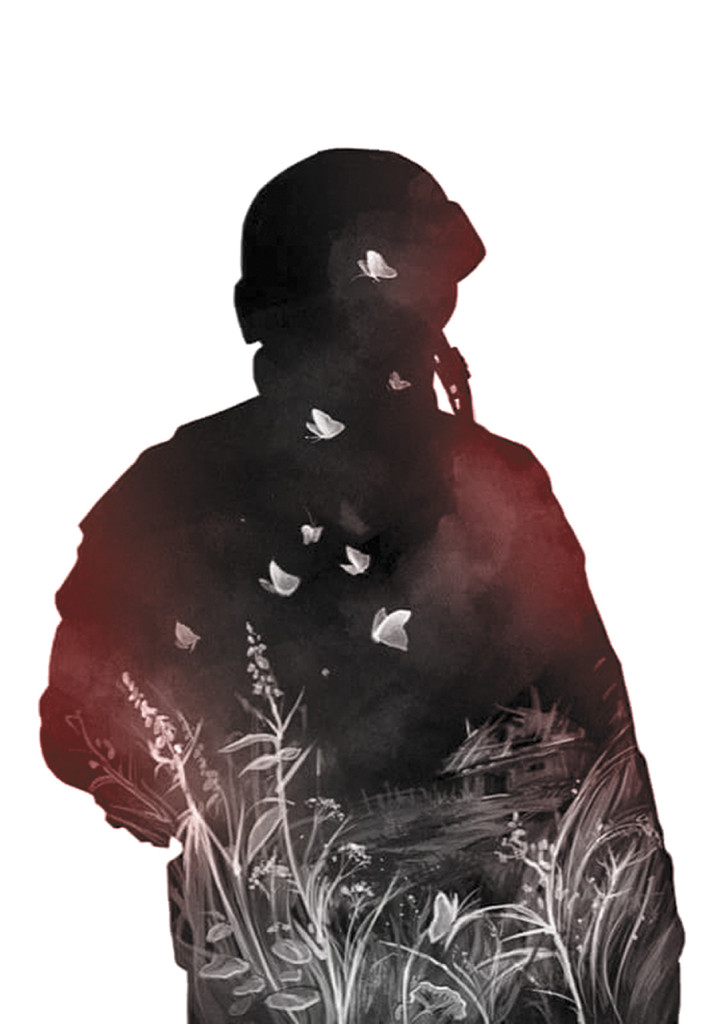 Rudyk published the final recording of 13project in April 2017, bringing the cycle to a close. If her goal was to help people reevaluate their lives, there are signs she has succeeded.

During the project, Rudyk received a letter from a veteran. He told her that his wife had been killed in a car accident, leaving him to raise three daughters alone. When the war erupted, he joined the army, “and I think he wanted to die,” Rudyk recounts.

Instead, he survived. After returning to civilian life, the soldier stumbled upon 13project and started listening. For the first time in his life, he cried. Then he felt better and went outside to smoke, he told her.

“And I think, that moment when he smoked that cigarette, he wanted to live again,” she said. “That’s the best thing I’ve ever felt.”

Now, Rudyk is looking for other ways to help with the reintegration of soldiers into civilian society. She stresses that, unlike in the West, soldiers in Ukraine seldom receive therapy after leaving the conflict zone, although there is a clear need for it. Veterans are often to hesitant to discuss their emotions. Returning home, they frequently find themselves surrounded by people who cannot understand what they have lived through.

As a result, Rudyk’s new idea is to create an online platform where veterans can discuss their experiences anonymously. This would provide them with support they so often lack in everyday life. It would also further one of the broader goals of 13project.

“I want to show people that they can talk about this,” Rudyk says.