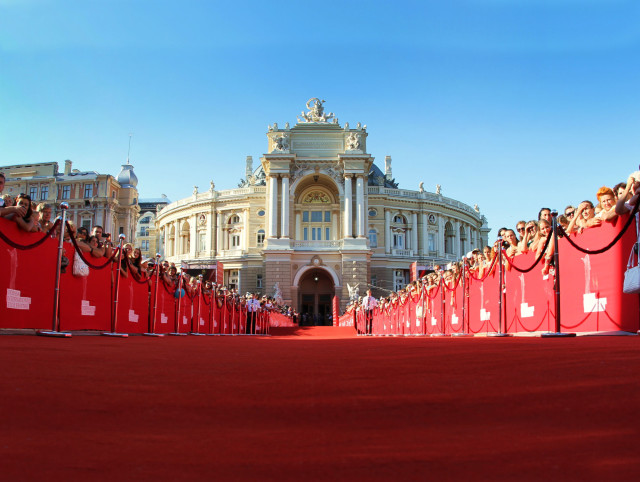 A festival is typically a bright and colorful kaleidoscope affair composed numerous diverse events. For visitors, a festival should be a  pure celebration of joy and mirth. For the organizers however it is an immense amount of work laced with innumerable difficulties and situations which require an immediate response. The professionals who put together festivals should be able to overcome obstacles and find ways to resolve any issue at record speed, ranging from satisfying the whims of star artists to obtaining international visas in a matter of days.

The Odessa International Film Festival became a global-scale event rather quickly. Even though the first festival took place as recently as 2010, the event is now included on most lists of the best film festivals in Europe. And, of course, it has been attended every year by guests with world-renowned names such as Rutger Hauer, John Malkovich, Peter Greenaway, Krzysztof Zanussi, Jos Stelling, Todd Solondz, and many many. The festival considers it’s signature  event to be the open-air screening on the Potemkin Stairs, showcasing classics of silent cinema accompanied by a live orchestra accompaniment.

Indeed, the Potemkin Stairs screening of the Dziga Vertov film “Man with a Movie Camera,” accompanied live by pianist Michael Nyman and his ensemble of 11 people was the main event of the 6th Odessa International Film Festival. Nyman composed an original soundtrack for the film back in 2002. Now, a decade later he was thrilled by the opportunity to visit the city where one of his favorite movies was filmed and to perform the work. But the negotiations with the musician were very complicated. He was quite surprised to learn of the projected scale of the event: 5 to 10 thousand people, in an open-air format. It was to be a new experience for him. Usually, his performances were held in chamber concert halls and this was not the sort of concert that he was accustomed to. He was even more surprised to discover that the concert would take place on the Potemkin Stairs, but it was Nyman himself who had the idea to end the show with a 5-minute piece from “Battleship Potemkin” accompanied by visuals of the famous stairs scene from the film. The effect was very powerful and recursive and the audience was thrilled to sit on the stairs as they saw film history take place before their very eyes.

The stage had to be enlarged especially for the Nyman orchestra, which included a most detailed and complex technical rider 10 sheets long in tiny font. The composer’s office was continuously in touch with the organizers asking if everything was proceeding according to the written requirements. The household rider for his personal requirements was amusing, if nothing else: a real tea kettle, a personal bottle of good red wine and a wine glass for Michael, no plastic – only glass dishes, good china cups for the tea.

Nyman liked Odessa a lot. He even went to the Kuyalnik, where Vertov filmed one of his scenes. “This trip to Odessa is very important to me. It is the essence of all my cinematic history. The entire time that I am here in this beautiful city, I am pursued by the desire to film, and simultaneously, random incredible events are taking place literally in the streets that are just begging to be captured on camera” he would say. Random events, which the maestro mentions, like the time when during a tour of Vertov’s and Eisenstein’s filming locations, he arrived at the Potemkin stairs just as a plaque reading “European Cinematic Heritage” was being installed. Nyman immediately took out his camera and began shooting, promising to include this episode in his film about Odessa.

As anyone who has ever organized anything will know, even with a great deal of preparation, it is usually not possible to take everything into account. During the master class, Nyman required a laptop, and none of those offered met his requirements. One of the organizers had to give up his own computer, and everything went well. Then, half an hour before going on stage, Michael asked for an iron so that he could iron his own suit.

“But no one will see — the stage is quite a distance from the audience!” the organizers responded with some bemusement.

“What does the audience have to do with it? I need to iron the suit for myself, not the audience” Nyman pointed out.

The urgent search for an iron concluded with success, and Nyman was very pleased – not just with the concert, but also with the professionalism of the organizers, who instantly resolved any unpredicted issue. This is a very important aspect for the festival guests, if they are to leave with positive impressions of the event.

Likewise, the international jazz festival Odessa JazzFest also boasts a rich organizational history. From 2001, it was held under the name “Jazz Carnival in Odessa,” but in 2011 the concept of the event changed and it has ever since been referred to as the  Odessa JazzFest. Katerina Maltseva, the producer of the festival, recalls that the participation of every single band is characterized by special situations or problems that require nuanced solutions. For example, the tuba star Jon Sass turned out to be a huge man — more than seven feet tall! A second bed had to be placed in his hotel room so that he could stretch himself out. And the tuba itself provided another challenge, requiring its own airplane ticket! However, as separate seat for such large objects is  only permitted if the weight does not exceed 56 kilograms, and the tuba with the case weighed 2 more than that, it was still technically too heavy. It wasn’t even the tuba, but the case which was too heavy. So, the trip required the manufacturing of a special lightweight case for the tuba.

Once, the festival featured an African vocal group. Before Odessa JazzFest they had been performing in Moldova at the Ethno-Jazz Festival. The Moldovan organizers of the concert were responsible for the coordination of the details of the trip, but they did not take into account the fact that the African musicians would require two visas from two different states! So the group was detained at the border, and one hour before the concert, no one knew whether they would be able arrive on time. They did at the last moment— and gave an incredible performance to boot!

In fact, paperwork issues and their expedient resolution are in a category of their very own as far as festival organization goes. Last year, the Odessa JazzFest invited a German band in which one of the musicians was an Australian. Germans don’t require an entry visa to Ukraine. Australians do however. The necessary paperwork was filed only a week before the event. Often, Ukraine can take at least a month just for the visa consideration process to take place. So, it was necessary to mobilize the consuls and diplomats, and to spend three days trying to reach the German ambassador on his personal phone — getting that number was a whole separate task, of course. Finally, after a 40-minute long conversation, everything was settled. “All issues are always resolved, we don’t have the right not to resolve them!” — concludes Maltseva.

Evgeniy Bal, an Odessan musician and actor with the Vlad Troitsky “Dah” Theater, began acquiring festival experience only recently — but immediately at one of the biggest festivals of the country, GogolFest, which features many art forms, but focuses mainly on experimental theater. Which is of course a different form of art, with its own specifics and particularities. Bal was often aided by his technical education. For example, when directors would demand a drill, dowels and two able bodied men for three hours in order to finish stage decoration, Evgeniy was able to do everything that was required in 15 minutes with just a stapler.

One production of a St. Petersburg based theater required that a fir tree be put on stage. That is a a real living fir tree that needed to be found in the middle of September. Bal found that he had to go drive out to the woods near Kyiv to obtain one. The tree was cut down carefully, with him making sure not to damage the roots. After the conclusion of the festival, Evgeniy transplanted the tree back home, and it survived and grew strong. Some time later, at a much larger theater festival in Prague, Bal again met the Dah theater, and told him the story of the transplanted tree. He saw such sincere delight in the eyes of management and theater actors — everyone approached him, shook his hand and thanked him for his non-standard  and humane thinking. “This is the first time we have heard of something like this, usually after the play the tree is just killed!”

It is precisely such an approach, with such people — both professionals and beginners — that the festival movement in Ukraine generally and in Odessa particularly is sure to thrive. It is true that people tend to think in categories: wether something is impossible or merely unrealistic. But festivals have a way of schooling one in the art of accomplishing the impossible and teaching one the critical need to think differently: if the problem can’t be solved in one way, then one has to find an alternative. Nothing is impossible, there are just different solutions! Especially when you are organizing a large-scale international festival!

Alexandr Topilov is a music critic living in Odessa