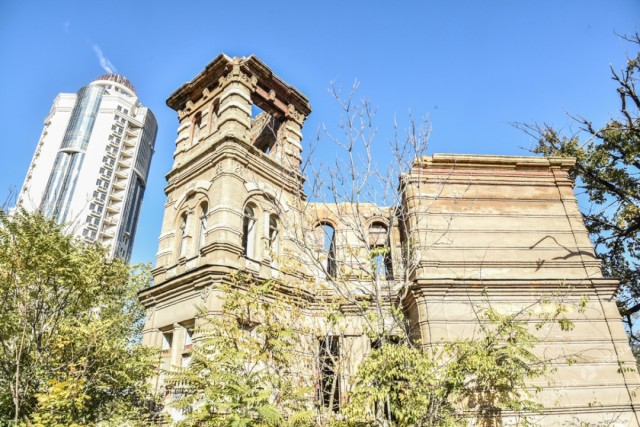 The mansion that once belonged to the Russian imperial state councilor Anatoli Fedorovich Docks is an unusual sight. The crumbling two-story limestone structure stands in the middle of an undeveloped lot in the Arcadia, not very far from Victory Park. Its three-tiered tower peers above the foliage that has overgrown the property. Behind its façade looms a backdrop of newly-constructed high-rise apartments and shopping centers. Despite its poor condition, Docks’ mansion retains a degree of stateliness, with its high-arched window frames and baroque moldings. That it continues to stand at all, as it has through the end of both the Russian Empire and the Soviet Union, can be seen as testament to stubbornness. It has been a home to Russian nobility. It was once the office of a sanatorium. It has survived foreign occupation and, most recently, a fire. However, its continued existence is threatened not by calamity, but by the needs of Odessan development.

The skyrocketing value of Arcadia’s real estate has already claimed many of the region’s remaining imperial-era buildings. While Odessa’s historical center teems with late imperial structures and architectural relics of Odessa’s belle époque, here, Docks’ home is a structure out of place and time. It is the last of its kind on the Gagarinskoe Plateau of Arcadia, and despite the efforts of local politicians and Odessan citizens to preserve it, its continued survival is uncertain. Attempts by Odessites to halt the destruction of similar structures have met with little sympathy and support by the local administration. On October 19th, another 19th-Century mansion, located off the Lyustdorfskoy Lane, was leveled to make room for a 25-storey apartment building. Queries made by locals to the administration regarding the preservation of the building were rebuffed, with officials stating that the building did not lie within the boundaries of the protected historical areas of Odessa.

In this sense, the case of the Docks mansion is far from unique. The vocal opposition of Odessa’s Governor Mikheil Saakashvili to the destruction of the building has certainly raised the profile of this specific instance of destruction, but beyond that, the case is one familiar throughout the city. The saga of the Docks mansion is emblematic of the challenges facing the preservation of Odessa’s architecture and historical patrimony. The building is caught between the forces of real estate development, changing economic realities and the quarreling of local politicians. Perhaps most critically, there is little in the way of zoning or historical regulations to protect historically valuable buildings such as Docks’ mansion, from either bulldozers or simple neglect. 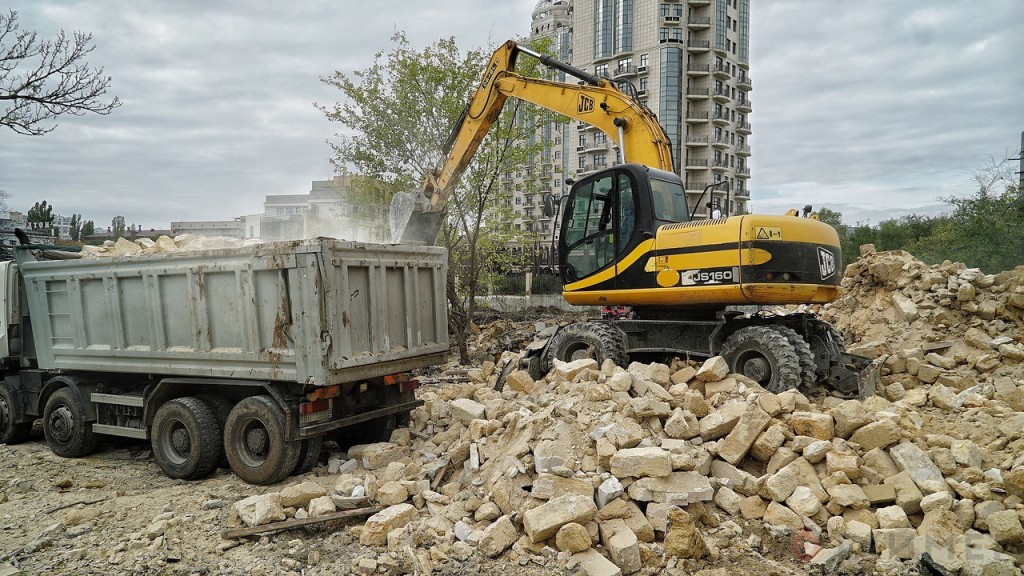 Since 2009, Odessa’s historical center has been placed on the list of possible candidates for recognition as a UNESCO World Heritage Site. That distinction would doubtlessly protect the most historically significant buildings in the city from destruction at the hands of developers and ensure their active preservation. As it stands, even those structures that are not at risk of being leveled by developers are in danger of slowly crumbling as a consequence of poor maintenance. Examples range from the dramatic, such as the collapse of the Imperial Russian Technical Society building, known locally as the “Mason’s house,” in central Odessa this past summer to the more gradual, but similarly tragic state of disrepair visible amongst the imperial-era buildings just a few blocks away from Deribasivska. As a consequence of the construction of these buildings – often they were originally made with soft limestone – the Odessan climate, and a lack of organized efforts at preservation, buildings such as the Fesenko Print Shop on Rishelievska Street are little more than an echo of their former architectural splendor.

Despite this, there is reason to be optimistic for the future of Odessa’s architectural heritage. The reason for this is that Odessan citizens themselves are deeply interested in preserving their history. The amount of attention on social media and the Odessan blogosphere devoted to the Docks mansion alone is telling, as is the civic engagement that has resulted from that coverage. It is certain that Odessites will not allow their history, as it is told silently through their city’s architecture, to merely crumble or be destroyed. Should the city’s residents be successful in mobilizing to secure the future of their architectural heritage, there is no reason that the old buildings of Odessa, with their historical and architectural resonance, should not stand for generations to come.

Jack Margolin is a Fulbright Grant recipient based in Odessa. He holds a bachelor’s degree in International Relations from Tufts University. His research and academic work focuses on the intersection of the rule of law, human security and democratization in the former Soviet Union.