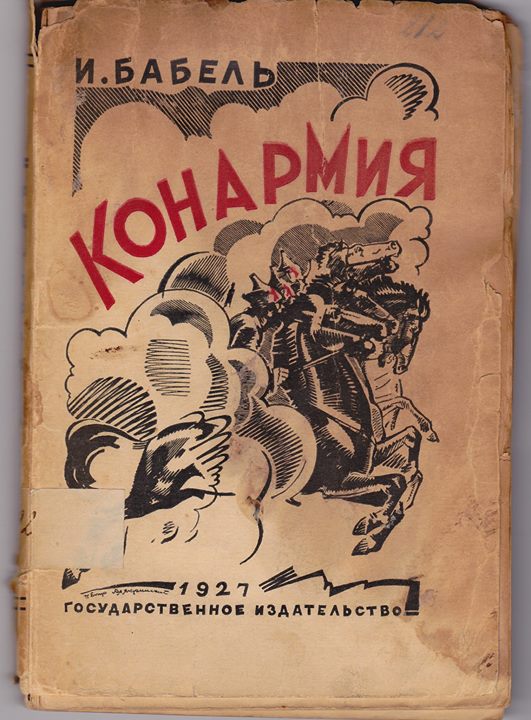 In 1929, the great American literary critic Lionel Trilling read a book “about Soviet regiments of horse operating in Poland” that disturbed him, charged, as it was, with an “intensity, irony, and ambiguousness” of the kind that the usually placid academic wished to avoid. That disturbing book was Nadia Helstein’s 1929 translation of Isaac Babel’s Red Cavalry (1926). Ernest Hemingway confessed: “Babel’s style is even more concise that mine,” proving that “even when you’ve got all the water out of them, you can still clot the curds a little more.” Trilling’s sensibility could not be more different from that of Hemingway, but they both seemed to find kindred interests in Babel. Hemingway had also read the Helstein edition, and also owned the 1955 Walter Morison translated edition of Babel’ Collected Stories. The generally ignored publisher’s note on the first page of that edition – now out of print for more than two decades – complicates its provenance:

The stories in the section entitled Red Cavalry, with the exception of “Argamak,” were originally published in Nadia Helstein’s translation by Alfred A. Knopf, Inc. in 1929; they have been revised by Walter Morison for this edition. “The Sin of Jesus” was translated by Mirra Ginsburg; “First Love” by Esther and Joseph Riwkin; and “Guy de Maupassant” by Raymond Rosenthal and Waclaw Soski. All the other stories have been translated by Walter Morison.

Stranger still is the unexplained fact that Helstein’s 1929 translation is apparently identical to a translation attributed to a translator named John Harland, published in London the same year by the same publisher.

Since I first encountered “Morison’s Babel” in a windowless mail room in the Downtown Miami law firm where I worked as a seventeen-year-old Bartleby, I have dreamed of retranslating it. This was not because the 1955 edition was lousy. Indeed, it has a beautiful and coherent literary matrix – aurally and visually right, a fluid mix of high modernist lyricism and vernacular shape shifting, prancing around like Dubliners on horseback. At the same time, it was littered with prominent but correctable irritants and omissions and dated Anglicisms: for example, over-translations of names (Sashka becomes “Sandy,” Matvei “Matthew”) and over-explanatory titles (“The Crossing of the Zbrucz” becomes “Crossing Into Poland,” even though Babel deliberately fudges the location, since whatever Poland was in 1920 began at the River Slucz). The two new translations that appeared during the past two decades (one by David McDuffs in 1994 and the other by Peter Constantine in 2002) fixed many of these mistakes, but, as many a reviewer has noticed, they have added fresh ones and, more importantly, their literary merit has been questioned. Aside from Boris Dralyuk’s new version of Red Cavalry, published after I began my own translations, these have been the only English versions of Babel in print, obliging me, and most of my colleagues who teach these stories, to use photocopies from out-of-print translations.

Given Babel’s mystifying quotations and obfuscations, it pleases me to add my uncertain name to the uncertain provenance of Morison’s edition. I join a string of attributions that should also include several rather graceful translations by Max Hayward and Andrew McAndrew (published in the out-of-print collections You Must Know Everything and Isaac Babel: The Lonely Years, 1925-1939, both edited by Babel’s daughter Nathalie Babel).

Babel himself was a translator from French and Yiddish. One of his best-known stories, “Guy de Maupassant,” is ostensibly about translation. Its narrator, a fictional Babel, has been hired by Raisa Berndersky, a rich Jewish Petersburg society wife, to help her with her attempts at translating Maupassant:

In her translation there was no trace of Maupassant’s free-flowing phrases with their drawn-out breath of passion. Mrs. Bendersky’s writing was tediously correct, lifeless and loud, the way Jews used to write Russian back in the day. I took the manuscript home with me…and spent all night hacking a path through someone else’s translation. The work was not as bad as it sounds. A phrase is born into the world both good and bad at the same time. The secret lies in a barely discernible twist. The lever should rest in your hand, getting warm. You need to turn it once, but not twice. In the morning, I brought back the corrected manuscript. Raïsa wasn’t lying when she told me of her passion for Maupassant. She sat motionless, her hands clasped as I read it to her: these satin hands melted to the floor, her forehead went pale, and the lace between her bound breasts strained and trembled. “How did you do that?” So then I started talking about style, about an army of words, an army in which all manner of weapons come into play. No steel can pierce the human heart as cold as a period placed just right. She listened, her head bowed, her painted lips parted. A black light glowed in her lacquered hair, smoothly pressed and parted. Her legs, with their strong tender calves, were bathed in stockings and splayed wide on the carpet.

Translation can be a peculiar drug – and, at its heady best, it is as exhilarating, intimate, crafty, and paramilitary as the hero’s steam-punkish metaphor.

Translation can be a peculiar drug – and, at its heady best, it is as exhilarating, intimate, crafty, and paramilitary as the hero’s steam-punkish metaphor. But the seduction – both the hero and the translator’s – is inconclusive. After planting a drunken kiss, the hero stumbles into the bookcase, causing twenty-nine volumes of Maupassant – “twenty-nine petards stuffed with pity, genius, passion” – to come crashing down. The narrator returns home to his bohemian garret, where he ponders the fate of Maupassant in the pages of Maynial’s biography:

He was twenty-five when he had his first bout of congenital syphilis. His prolific joie de vivre resisted the onset of the disease. At first, he suffered from headaches and fits of hypochondria. Then the specter of blindness rose before him. His sight grew weak. He became paranoid about everyone, unsociable and deceptive. He struggled furiously, dashed about the Mediterranean in a yacht, fled to Tunis, Morocco, Central Africa – and wrote constantly. Having achieved fame, in his fortieth year he cut his own throat, lost a lot of blood, but survived. They put him in a madhouse. There he crawled about on all fours and ate his own excrement. The last line on his medical chart read: “Monsieur de Maupassant va s’animaliser. (“Mr. Maupassant has turned into an animal.”) He died when he was forty-two. He was survived by his own mother. I read the book to the end and got out of bed. The fog came up to the window and concealed the universe. My heart felt tight. I was brushed by a premonition of the truth.

Babel wrote “Guy de Maupassant” in 1922 and it appeared in print only a decade later, but it describes the period in which he was writing “Odessa”: 1916, while he was living in Petrograd, dreaming of the Odessa of his youth – and having “premonitions” about being an Odessan who makes it big in Petrograd. The “tiniest slender wisps” of that premonition, the “small joyful” voices of 1916 brought sunshine through the Petersburg fog. By 1922, and certainly by 1932, those wisps have congealed into the premonition of a truth caught tight in a heart shrouded by a world-concealing mist.