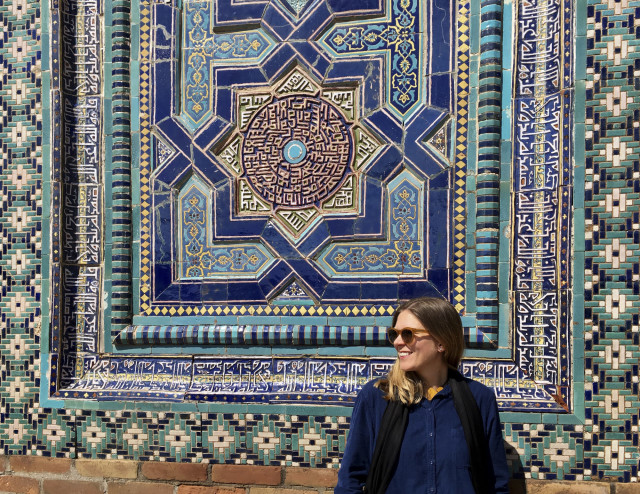 An adventurer, travel writer and lover of refined cuisine, Caroline Eden is a regular contributor to the travel and food sections of British publications such as The Guardian, Daily Telegraph, Financial Times. She has traveled all across the former Soviet Union — and has reported widely from the lands of former Soviet Central Asia — Uzbekistan, Kyrgyzstan, Kazakhstan and Azerbaijan. She is no stranger to the Royal Geographical Society in London, and she last visited Odessa (which she adores) in the wake of publishing her first book “Samarkand – Recipes and Stories from Central Asia and the Caucasus.” She spoke with Senior Editor Katya Michaels in the editorial office.

The first time I ever came to Odessa it was just as I’d hoped it would be. I’d been traveling in the former Soviet Union since 2009, all around, but mainly in the South Caucasus and Central Asia. Before that, I’d been working for a publishing house based in Hong Kong, telecommuting from London. I edited a book of theirs on Iran, and then I started to work on a brilliant cultural magazine very similar to The Odessa Review, called Steppe, which was all about Central Asia. At the time, the whole region looked like a huge blank on the map to me. I traveled in India and South Asia a lot, but never really considered this massive bit in the middle. I thought that the mix of Soviet and Islamic cultures would be very interesting. So I took myself off on a solo trip for a month to Uzbekistan and Tajikistan, and all around the two countries, and I just really fell in love with them and kept going back. In fact, that started my writing career and Samarkand was published last year in the summer of 2016.

I think when you travel a lot, it’s like filling in the gaps and joining the dots. You just want to connect the different places. Eventually, I became increasingly interested in Turkey and tracing the Silk Road. That led me to the Black Sea, I went to Russia, and became interested in Ukraine. I first learned about Odessa when I did my masters degree at SOAS (the School of Oriental and African Studies, University of London). This was in Jewish Studies and Diaspora, with a lot of focus on the Middle East, but also a lot of lectures about Jabotinsky. I started to hear about Odessa, and over the years I built up this picture in my mind. I started to read some Babel, who became one of my favorite writers, some Russian literature, but I think it was Jabotinsky that sent me here.  I’m a travel writer and I travel to all kinds of far-flung places — from Bangladesh to Haiti — all over the world, but sometimes, a place really gets into my head long before I arrive. It’s nearly always a city. Before I arrive, I have a strong feeling that I’m going love it. Samarkand, Odessa, and Istanbul as well — those have all matched my expectations and far beyond.

I am very interested in using food as a lens to look at other things. I’m not so interested in straightforward recipes, if I’m completely honest, but more about the culture surrounding food. For example, trade and the way food crosses borders. I travelled through Bessarabia, taking the bus to Constanta last August, and traveling onwards from there to Istanbul. Obviously, Bulgaria was once under Ottoman rule, Odessa and Constantinople back then were connected a lot by trade routes, Crimea itself was under a whole series of empires during its history. It’s all interconnected, and I think the Black Sea culture as a whole is fascinating. You can’t see everything through food, but I think food is a good introduction to talking about the other things that unify the Black Sea region.

On the map, the Black Sea looks like a lake more than a sea. It’s almost like there is no border between these surrounding countries. Ukraine, Georgia, Turkey, Bulgaria… The southern winds flowing through, the interconnection of the Silk Road touching many of these places. In terms of psychogeography, it’s very interesting. In Neal Ascherson’s book, The Black Sea, he writes about the currents in the Bosphorus. There are two currents — one on the top going one way, and one on the bottom going another way. Apparently, this is very unusual. It helps the revitalization of the water and the rivers that are coming into the Black Sea. Most of it is dying, but the top twenty percent is ok, and even looking better than it did in the 90’s.

The Black Sea’s geographic and strategic position is critical again. I think it always has been, but definitely now. I wouldn’t say I’d be nervous to go to Crimea, but it is no longer interesting to me for some reason, while Russian troops are on the ground. My husband, a journalist, used to go to Georgia a lot for work, covering the Georgia-Russia war. We both really like Tbilisi, but I think Odessa has just as much to offer in many ways, both very atmospheric for visitors. For my interests, Odessa has become my new Samarkand. Of course, it’s a much more modern history, but it’s so very multilayered and multicultural. A lot of history and dreams in the air, I think because so many great things have happened here, and terrible things as well. It’s an honest place, it’s got tragedy and magic and feasting and fasting and irony and humor.

Odessa is just a nice place to be, a place where you can soak up atmosphere. It’s a cheesy thing to say, but I just like being here. I don’t feel nervous about looking into a courtyard and taking pictures, having a look around. If you’re a journalist and naturally curious, I think this city serves you really well. I am very happy sitting on a park bench, watching people walking down the boulevard, looking at the old Londonskaya Hotel, the Bristol — I love old hotels. Just walking around admiring the architecture: these buildings in Odessa are incredible, very varied, but all so colorful, especially when the sun hits them and the cracks are highlighted – there can be such beauty in decay.

You can really feel the literary sense of the city, which doesn’t exist in a lot of places. People talk about a certain light that places like Jerusalem have, and I see what they mean, but here it’s more of a general something in the air. The modern urban features don’t detract from it, I can still feel it and I don’t think I’m imagining it. The literary legacy, the many cultures rubbing off on each other. There is something also that links port cities around the world. That’s interesting in itself. The sea and trade produces a certain buzz and an excitement and possibilities. I don’t know how immediately obvious it would be to visitors but if you were teleported from Liverpool or Shanghai, or any other great port city, if you would see the connections.

Besides, Odessa is really good value, if you’re coming from Western Europe. You need to try hard to spend money on food and drink. On top of that, the food, in my opinion, is far superior to Kyiv. I struggled a bit to eat well in Kyiv, but Odessa has so many great restaurants that I’m wondering if can I fit in every place I wanted to go. As well, this hotel, Frederic Koklen, is my secret place. Such a great place to stay, the receptionists are super friendly, and the rooms are really pretty, done in a sort of French style. They have a great chef. In the end, I just like to come here, to Odessa. I think even if I wasn’t a journalist, I would still like coming to Odessa. I could certainly live here for a while — if the city would allow me.