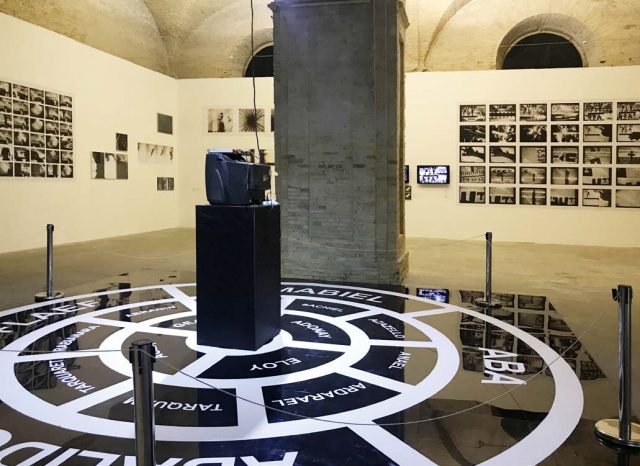 A massive new exhibition of video art in Kyiv tells us how George Soros single handedly created an avant garde art movement. “Flashback. Ukrainian media art of the 1990’s” can be seen at the Mystetskyi Arsenal until May 6, 2018 .

It has been a mere 20-30 years since the wild post-Soviet nineties graced us with their outlandishness, but if one is to compare the artworks that were being made then and now and you might think that it had been much longer.

The artist and photographer Ivan Tsupka is only 44, yet his works occupied a good part of various media and video art exhibitions back in the 90’s. He recalls how he used certain ideas — ones that would hardly surprise anyone today — to make his works stand out. “In a certain way, it was flirting with the feminist movement, which was only just starting to gain impetus”, he says, explaining his “Bloody Mary”, (1999) a 9-minute action thriller he worked on alongside Natalia Golibroda and Solomia Savchuk. It tells a story of a “female gang who try to suss out who owes what to whom after a failed robbery attempt”.

“Plastic handguns from a kiosk shop were a cheap and effective way to add drama [to an art piece] while the fact that they were in women’s hands made the situation more absurd and other-worldly”.

Projected across a white wall of Kyiv’s old Mystetskyi Arsenal factory building, “Bloody Mary” does make you stop and look twice: mostly, thanks to its outright ludicrousness. After all, Tsupka makes it clear that the video is unfinished, underfunded and probably shouldn’t have seen the world in its current form (“I deemed these test works to be not good enough or even quite bad”.) But the work succeeds in at least one thing: that is, perfectly illustrating the media and video art movement of the post-Soviet 90’s Ukraine. This video and hundreds of other equally mesmerizing works make up the brand new exhibition in Kyiv, entitled “Flashback. Ukrainian media art of the 1990’s”.

Tsupka says that the media and video art movement was born and nurtured in the 1990’s thanks to the generosity of Hungarian- American philanthropist George Soros.

“It all started with Soros grants, without them nothing would have exist”, he explained to The Odessa Review. “The money was used to carry out exhibitions, and works were mainly created specifically for these particular exhibitions”. He adds that Ukrainian video art, unlike that which existed in the West a couple of decades prior, was a “partisan movement”. “On the one hand, it [embodied] a certain open-mindedness; on the other, [it epitomized] a total absence of cultural tradition”.

One thing that makes artworks from this period seem so bizarre yet so intriguing is the use of the then latest technology methods, which as one might expect, have become largely outdated today.

“It is no coincidence that the draft title of this project was “Old new media” because we considered all these new media technologies in the 90’s — cameras like S-VHS and formats like Hi8 — a peak of technological achievement”, Oleksandr Solovyov, one half of the curatorial team behind the exhibition (the other is Solomia Savchuk herself), explains.

“But today we see — especially considering how much the technology has developed — that it’s all useless and can’t even be recreated”, he adds. “That’s why this exhibition is also about how fast the technology gets old and how psychology and humanity are timeless”.

One example of using technology to make videos more interesting is Maksym Mamsikov’s 1997 “Speed Calendar”, which features a toilet with a human hand flipping its seat up. The image is looped, and repeats this action over and over again. The name “Speed Calendar” suggests that the toilet seat flipping is like a flip calendar but instead of pages that show the date there is a toilet seat that… doesn’t really display time passing in the same way. Unless you want to tell time by the number of times the toilet had been used, of course.

Another 1999 Tsupka work, “Kill’em All”, shows a woman dressed in all black while holding a black handgun taking different poses and shooting at animated objects, which were added using computer technology. This makes the video work resemble a computer game.

Whereas “Curved mirrors” — a video by Oleksandr Hnylytskyi, Nataliya Filonenko and Maksym Mamsikov — uses improvised “technology”. The 14-minute video envisages different body parts (feet, hands, faces, breast, etc.) morphed by a distorting mirror to make it look like they try to touch and play with each other. “This work, in which the authors are also the actors, has no rigid idea or goal, no single plot”, Solovyov explains. “The viewer is shown a stream of video improvisations, surrealist sexual hallucinations triggered and coordinated by modular deformations — optical filters created by the distorting mirrors of funhouses found in Soviet parks of culture and recreation”.

The death of video art

Despite it being such an exuberant movement displaying a whole array of techniques like morphing, performance cinema, 3D animation, and interactivity, it was also a very short-lived one.

“[The 90’s saw] both the childhood and the aging of video-art. It was born [in Ukraine] 20-30 years after it was born in the world, and flew by like a comet leaving numerous interesting, talented and bright video artworks behind”, Solovyov says.

“It never morphed into an actual art movement, remaining an entertaining, marginal toy”, Tsupka agrees. “A couple of years after the Soros financing stopped, the video art mostly disappeared as well. Even though it is very easy to create today: you don’t need expensive cameras and computers, a mobile phone would suffice”.

But, at least, 90’s video art definitely blessed us with a fair share of enthralling material to look back at. “Video art was in a way a wild field”, Tsupka sums it up. “It gave the green light to create weird and funny stuff”.