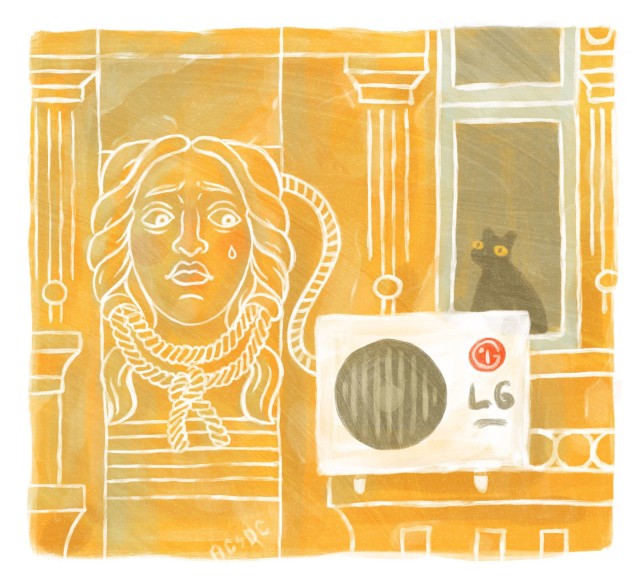 Odessa’s old houses are more than they appear at first glance. Looking past the plaster balconies and air-conditioning units, its clear that these buildings were once remarkably beautiful. Their facades are adorned with unique and mystical bas-reliefs, whose histories have often remained unknown. These mysteries give birth to urban legends, on of them being the story of the mysterious mascaron — a bas-relief in the form of a young woman’s head with a rope around her neck.

You can see the mascarons in many places on Marazlievska street. Some of the finest examples can be found for example on house number 2 and house number 5. The most infamous, however, is further down the road, on the building known locally as the “house of the hanged,” due to its two identical bas-reliefs. The majority of researchers agree that this mascaron is somehow connected with the the numerous kidnappings of beautiful young Odessites in the middle of the 19th century, who were enslaved and sold to Turkish harems. It is said these women were held captive in the “house of the hanged” before being sent across the sea.

According to urban legend, a group of Odessan slavers once captured a pair of beautiful twins. Knowing of their fate, the girls chose to hang themselves rather than be sold into bondage. The two heads with ropes around their necks where installed on the house in memory of these events, as symbols of the slave trade and its victims.

Of course, this is just a story, and its veracity is a matter of debate. Historians have so far not been able to determine with certainty the reason for the appearance of these unusual elements of décor on the building’s facade. Yet ethnographers periodically find confirmation of events in Odessa’s past which lend credence to the tale, or at least cast light on the legends of Odessa’s historical slave trade. For example, in a back issue of the “Odessa News” from 1893, the following passage was found: “Not long ago, a certain “VF” came to the Russian embassy in Constantinople, and claimed that she had been sold into a harem by an Odessa man named “HM”, from which she had managed to escape…”

Another documented case reads like the plot of an adventure novel. In the 1880’s, news circulated around Odessa that the kidnapped 16-year-old Anna Prokofieva had turned up in Greece. There, she had been confined to the harem of a wealthy Turk who settled in Thessaloniki. With time, he reconciled with the woman, who became his wife and bore him two sons. Soon afterwards, for reasons unknown, the Turkish man died. After his passing, Anna inherited a significant part of his estate. According to his will, she inherited four houses in Thessaloniki, six sailing schooners and 5,000 lire in cash. Anna donated one of the vessels to the Athonite monastery, and gave away one of her homes to be turned into an Orthodox school. After this, the 24-year-old widow sailed back to Odessa aboard her own ship, a real life Odessan Roxelana!

The connection between Odessan architecture — particularly the notorious mascaron — and these events in the city’s history remains a mystery. Is this a monument to lost family members, or was the architect merely inspired by the stories of the kidnappings of beautiful Odessa girls? Most likely, we will never find satisfying answers to these questions. We are, however, able to preserve the unique architecture of Odessa and the history they represent. According to researchers, Odessa surpasses Kyiv and even Lviv by number of historical buildings. Around 5,000 residential buildings in Odessa, or 11.5% of the entire housing stock, were constructed even before 1919, and almost another 6,000 before 1945. Every year, this number becomes smaller. With their destruction we lose not only our architectural heritage but their stories as well.