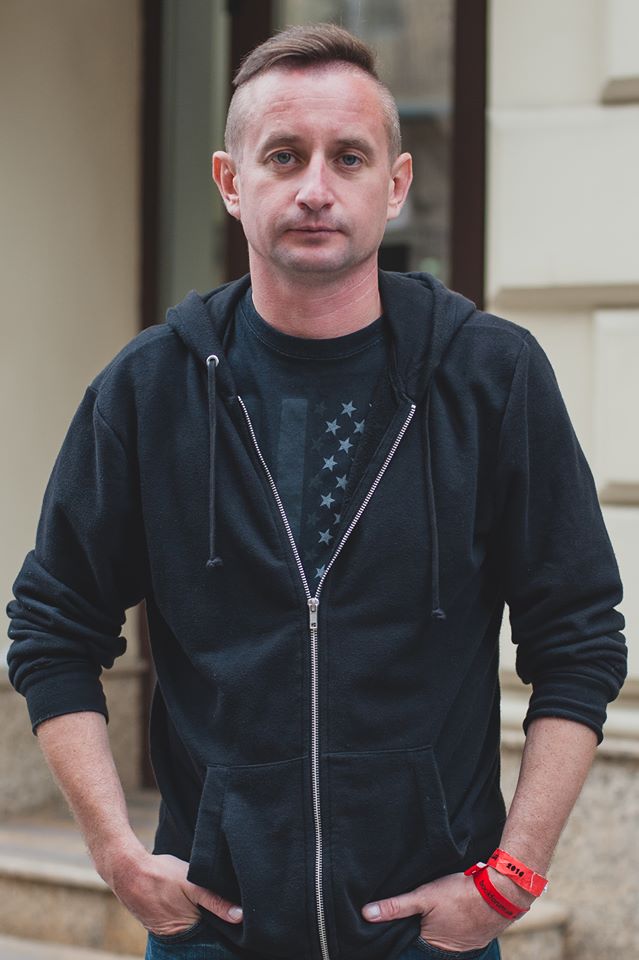 Serhiy Zhadan’s youthful looks in his early 40’s are symbolic of this cult status among Ukraine’s younger generation. The events of the Maidan have propelled the poet into the ranks of international stardom as a bright new face of contemporary Ukrainian literature and civil society. A native of the industrial-academic eastern Ukrainian city of Kharkiv, his poetry and prose examine the lives of anti-heroes and ordinary people. Typologically, his work would not be out of place among that of the beats and their literary progeny. This interview with the poet took place in tandem with the publication of “Tampliery” (Templars) his newest book of verse it was conducted at a restaurant close to the Maidan square in Kyiv.

Odessa Review (Regina Maryanovska-Davidzon): Is “Tampliery” your first book written entirely after the events of the Maidan?

Serhiy Zhadan (SZ): No. The first book after Maidan was “Life of Maria,” released in March 2014. The first poems from that book were written before 2013, but mostly it contains poetry from 2014/15. So the subject of the war in the East was first touched upon in that book.

OR: What is the difference between the themes of this book and the previous one?

SZ: Actually, each one of my new books has been a continuation of the previous. I don’t try to reinvent the bicycle every time. For me, literature is a continual process. All of my books are the one same book that I’ve been writing for more than 20 years. The first was published in 1995. So it’s difficult for me to answer this question. All of my books are my diary, my reflections. In general, it is difficult to comment on poetry.

It seems to me that compared to last year’s poems, these are more balanced. There is a sense of distancing from history, my view of the events taking place in the world and the country has changed. For example, when you see a tank for the first time, you want to climb inside and touch everything. When you see it for the second time, you don’t really have to climb in anymore — and this is not just a metaphor. Last year for Independence Day, my musician-friends, the dogs (ed: the name of his band) and I went to play a concert for our tankers. They showed us their tanks, it was a very interesting experience, but I wouldn’t want to have it again.

OR: In general the metaphor of war has a strong influence in the new direction of your poetry does it not?

SZ: Yes, I’ve been living it for 3 years now, it’s the most important thing for me, but I wouldn’t say the only one.

OR: Many consider you to be the foremost representative of a certain kind of new movement in modern in contemporary Ukrainian poetry. You represent the class interests of modern young Ukrainian patriots.

SZ: Any attempt at hierarchization is very limiting. Coming back to your question — today, many write about the war. You can pretend that there is not a war, but that won’t change the reality. You could just go somewhere around Lugansk, and you will understand that the reality of Kyiv or Kharkov and that city — are very different realities. You could ignore it, dissociate from it, but then there are a lot of ethical questions. It seems to me that contemporary Ukrainian art is not dissociating, but showing itself to be a healthy organism that is capable of reacting and rising to the most acute challenges.

OR: What you are saying is very important, because in Eastern Europe, in this contemporary society, poetry still has a great deal of weight, and a strong influence on the cultural and psychological development. Young people should know and want to know what poets think about war. Western society, for example, has drifted away from that.

SZ: It’s true, Eastern Europe has retained some demand for cultural expression. This signifies that there are some niches that remain unfilled. Society really needs moral authorities, role models, but it is not always justified and doesn’t always make sense. A good poet is not always a good thinker, politician or analyst. In the West there is also a system of moral authorities, but with us it’s much less sophisticated. Our media space is fragmented, unstructured. I am always being questioned about politics, although I’m not a political scientist, but that doesn’t stop journalists from asking for my opinions on the matter. I often answer only to be polite.

OR: Tell us about the modern direction that Ukrainian and Russian poetry have taken after the Maidan.

SZ: There is no such singular direction. The poetry is very different, but it’s difficult to say that there are well-defined tendencies. Only a few can be pointed out: post-Maidan poetry is very social, it is oriented toward reflecting reality, which sometimes can descend into a kind of political kitsch. That is a kind of characteristic of modern literature compared to pre-war literature. There is a growing maturity, a departure from a certain infantilism. Art was a place where you could hide. In some situations, cynicism and irony are ethically ambiguous. Laughing at those killed in action, for example.

OR: Poetry, as art, has changed a great deal in the last two years.

SZ: Yes, it changed a lot. It became much more active, social and charged with а political awareness of what is happening. To me, the moment where transformations began is very clear. They began on Maidan, where not only politicians and activists, but poets, musicians, artists could express their own position. For many of them the revolution is still ongoing.

OR: After the Maidan, the Western public became much more interested in Ukrainian culture generally and your poetry specifically. Has your new book been translated to English?

SZ: Not the new one yet. Poems about war from “Life of Maria” have been published in Russia and in America, and they are being released in English by the Yale University Press next spring.

OR: How are you perceived in Russia?

SZ: In Russia everything is very complicated. To begin with, the relations between Ukrainian and Russian literature were never that good. The last 15 years have seen a development of a more normal, functional and interactive relationship of mutual influence. That is translations have been published and we started to visit each other. Understandably, after the annexation of Crimea and then the war, there has been a rift in that relationship. Everyone is divided into two camps. I doubt that these relations will improve in the immediate future. Although, I released two books this year. Of course the large, serious publishers that I have worked with before the war are no longer interested in my work. But I have been contacted by a group of young Marxists from St. Petersburg who don’t accept Putin’s politics and are against the occupation of Ukraine — they are offering to publish my book with the crowdsourced financial resources of the readers. So it’s not the money of Russian businesses that cooperate with the government. This format is acceptable to me, so of course I agreed, especially because there are so many people in Russia who support me and are expressly against Russian chauvinism and imperialism.

OR: Aside from English and Russian, are your books being translated into any other languages?

OR: What would you like to say about your work to Western readers who have never heard of you?

SZ: I don’t really enjoy self-presentation. In truth, I write about very simple things. People who enjoy science fiction, melodrama, action or other kinds of genre literature — they wouldn’t be interested. I write about simple ordinary people. I think that you find the strongest and sincerest emotions, the most unexpected plot twists in everyday situations. I was always interested in this kind of literature. For example, I love Hemingway or Faulkner, Bukowski (whose works I translated to Ukrainian, by the way). All their stories and the situations they describe are close to me, because I can imagine being in them myself. It’s possible to see great depth in such simplicity and clarity.

OR: Is there a genealogical connection between the direction of your work now and Soviet or post-Soviet literature? Do you feel like a descendant of 1930’s antirealism?

SZ: I came to Kharkiv when I was 17 years old and I had the opportunity to know writers who had known people who were shot by Stalin’s squads. I discovered the mythology of metropolitan Kharkiv of the 1920’s-30’s, when it was a cultural center of Europe. I worked in the Kharkiv Literary Museum and handled a number of important manuscripts. That literature is something very close to me, and also Ukrainian futurism. I wrote my dissertation on this topic at the Kharkiv Pedagogical University. Those are the books that are always with me. There are some of the writers whose books I always carry with me: Mykhail Semenko, Yevhen Pluzhnyk, Volodymyr Svidzinsky, Mykola Khvyl’ovy. These people shaped the Ukrainian literature of the 1920’s. Even now I am reading the biography of Mayakovsky, although I’ve read it a hundred times by different authors.

OR: No one knows about Ukrainian futurism in the West, even among the most educated people and in academic circles where Russian futurism is studied.

SZ: This is a complex systematic problem — the problem of Ukraine’s existence as a cultural and historic presence in the informational-cultural space. The Ukrainian Kharkiv avant-garde is very interesting and unique. Often, Western people know about it, but don’t realize that it’s Ukrainian art. Last year I had a literary evening in New York’s Ukrainian Museum which featured a large exhibition “Kharkiv theatrical design.” They presented the works of extraordinary artists — Aleksandra Ekster and Vasyl Yermylov. And this is part of another huge problem that is developing now: what can be considered part of Ukrainian culture? There is a view that it should be exclusively in Ukrainian language and Ukraine-centric. In that case, we are cutting off a great stratum of culture that was created by those who were born and lived on Ukraine’s territory. Like Malevich or Gogol, for instance. In my opinion they belong equally to both cultures. Even today’s political and historical crisis shows that Ukraine can’t be limited by the boundaries of Ukrainian language. For example, Boris Khersonskiy (ed: a contributor to this magazine) is a great Ukrainian poet. He belongs equally to Russian and Ukrainian cultures.

OR: What more do you think could or should be done for the promotion of Ukrainian culture in the Western world?

SZ: We need a different state mechanism. If we are talking not about sporadic presentations, but a systematic presentation of culture, then it must be the work of the state. I doubt that such cultural diplomacy work can be done on some private level. Admittedly, Ukraine doesn’t have a clear overarching political position, nor a defined external cultural policy. We could learn quite a bit from the Polish. In the last 20 years they have accomplished a great deal in terms of popularization and self-presentation in the world, and they are doing it right: showing how to popularize the classics without neglecting modern literature. We do have a good, close and fruitful relationship with Poland.

Regina Maryanovska-Davidzon is managing editor of The Odessa Review