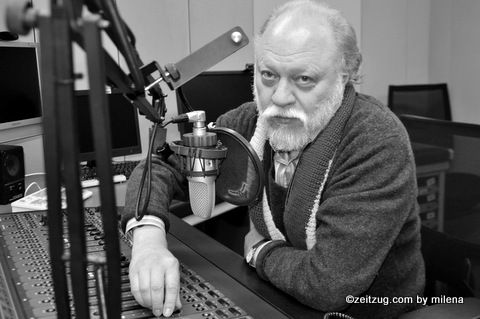 This interview is based on a transcription of a radio interview that took place between Igor Pomerantsev and The Odessa Review contributing author and well known poet Boris Khersonsky several years ago. Pomerantsev, a legendary broadcaster has been working for RFE/RL’s Russian Service for more than 25 years. In addition to his work as a broadcaster, he has also authored more than 10 books which include collections of poetry. The satirist and publicist Vlas Doroshevich once called the language of the Odessa ‘’the language of the straight-forward people – free as wind’’. However, Khersonsky does not relate to this language with that sort of irony free romanticism, but he does still retain a keen interest in it. This interview appeared in a slightly different form on the RFE/RL’s Russian Service.

Igor Pomerantsev (IP): Boris, you’re an Odessan and a Russian poet. As a poet, does the Odessan language and its unique texture concern you?

BH: I seldom use it. I never use the Odessan language owing to the fact that it is as dead as is Latin. It is a language used to enter readers into a time and a specific context. Also there is a huge number of those who want to be Babel today or Ilf and Petrov. And that is just impossible. But, sometimes I do use the expressions that I have heard before.

One can say that the Odessa language existed, and today there are reprintings or copies of it. I mean, there is some hope to keep this language alive artificially, when it cannot actually be kept alive. The Odessa language is a certain mix of dialects; it is the attempt of people who began speaking Russian to use the language’s template. One would say “I saw you to go to a bar,” but, my grandfather from 1930’s Bessarabia would say “I saw, 100 people stand in a queue for a drink. Their eyes showed that they wanted to kill somebody for standing in this queue.” He would also say something like “he died of 80 years.” All of his rumination I would consider to be part of the Odessa language. It seems that this is a language of a people who can’t assimilate into the mainstream community. They already left their foreign-language communities, whether they were in the city or out of the country, but they can’t replicate the new community. And this Odessan language, in my opinion, is the language of those people, that is a historical language.

IP: You focus on German and Yiddish influence onto the Odessan language. What about Greek, Ukrainian, Russian? What are their influences, their evolutions onto the language?

IP: Are there any writers and poets who, unlike you, do not consider the Odessan language to be dead?

BH: Well, of course, there are. All those who write the so-called ‘Odessan humor’ always use it and will always use it. For example, Smirnov writes detective stories, but has also made Odessan language dictionaries. This dictionary expands from edition to edition and is, in fact, quite popular. There is a writer, Alexander Bilstein, who has written an infinite amount of short stories about Odessan court yards and, of course, the characters of these yard speak the Odessan language.

IP: Stylistically refined writers – likeValentin Katayev or Yury Olesha – did they write in the Odessan language?

BH: I do not think so. Katayev tried to write in the Odessan language, he used it in his early works. Well, it was in the same “The lonely sail grows white” style which he used to use all the time. Yes, I still remember when this language was everywhere in his writing. Then in his late works, he transitioned to a kind of intentionally bad writing style. I do not see the Odessan language in these works any more. The humorist Zhvanetsky, of course, uses the Odessan language. Or rather, not the language, but rather the prototypical Odessan intonations.

IP: Do you love your native dead language?

BH: It is hard to say. I mainly do love it. I love it as a certain memory from the past, but there are other feelings attached to this love. I have a dual relationship with Odessa. I love it and it is my city, though it is not what it was like before. Over time it has becomes less “mine”, but I have one important claim to this city – Odessa loves its swindlers too much. If we speak about Odessa, then we must speak about Benya Krik, Ostap Bender, Sonka the Gold Handle. The popularity of magnificent scientists, great writers and poets from Odessa will, nevertheless, always be compared to Mishka Yaponchik, Benya Krik – Benya always had to speak in an Odessan way. The main issue is that it is widely thought that this is the language of Odessan criminals, this is also what Babel was taught. Actually, I read an interesting article not so long ago about the writings of Odessan criminals, Babel’s famous intonations are not there. They are instead vulgar, extremely primitive notes and texts. I am afraid that this language was not thought up by thieves, but actually by Isaak Babel.

IP: Boris, you called the Odessan language dead. Is loving it a form necrophilia?

BH: No, by all means, because I don’t love this dead language, I loved it when it was alive. And now the usage of it causes me strong irritation. I love this language in an environment of the past and in the old Odessan yards. I loved the way it sounded from the lips of old people because that’s all they knew.

IP: As a psychologist, does your knowledge of the Odessan language help you to speak to some of your patients?

BH: Of course not. Practically nobody speaks in this language in Odessa. It is possible to hear it sometimes in the remarks of old people on the minibuses, reminding me of those typical Odessan speech patterns. Also I hear it from lips of writers, of course, which infinitely prolongs the Odessan myth and the Odessan tradition.