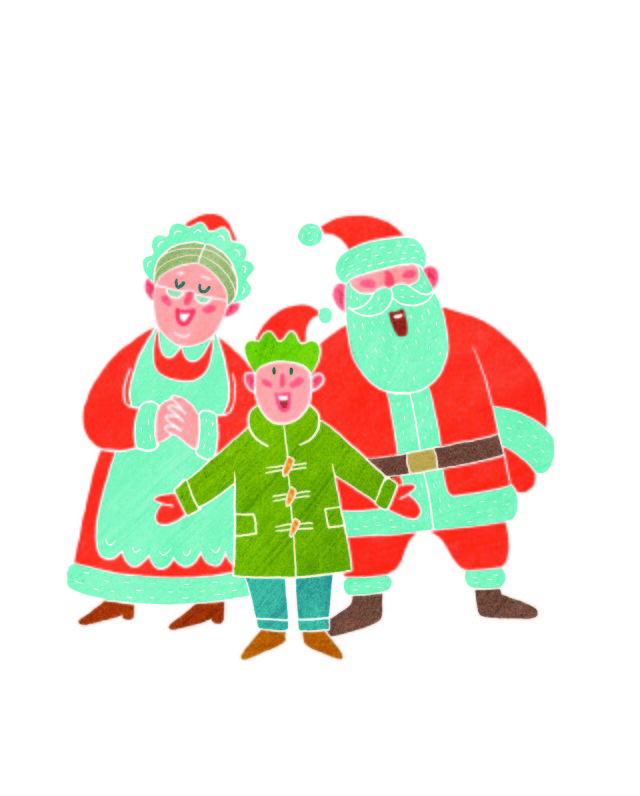 Christmas is considered to be the main holiday of the year in most Christian societies but it is celebrated in vastly different ways across different cultures and church denominations. Starting from this year, December 25th will be considered a national holiday in Ukraine as well as the traditional Orthodox January 7th of the Julian calendar.

But how do  people celebrate Christmas all around Europe?

Religion has made a comeback in Ukraine, just as it has in every post Soviet country after more than seven decades of repression of religion by the state.

In Ukraine, as in most majority Orthodox Christian countries, Christmas begins on the evening of January 6th – which is considered to be the Holy Evening. For the Holy Evening it is customary to gather the whole family for supper, which begins after the first star appears in the sky. Many families celebrate with `Kutya`, a traditional Christmas wheat berry pudding. It is the first  of 12 traditional dishes (symbolizing the 12 months of the year), on the Holy Evening table. Kutya is the first dish that is eaten during the evening feast. Also included in the feast are such Ukrainian staples as vareniki, uzvar (a boiled drink), cabbage rolls, borsch and fish. After dinner, it is customary among some families to forgo cleaning up the dishes so as to leave some sustenance for the souls of the recently departed.

For Ukrainian children it is not the Russian or Soviet Ded Moroz (grandfather frost) but rather Sviaty Mykolay (St. Nicholas) who brings them gifts. Much as in the rest of the Western world, the symbol of the Christmas holiday is a green Christmas tree, but its wide popularity in Ukraine can only be dated to the end of the 19th century. Before that time, Ukrainians typically decorated their houses with a `grandfather wreath` of cereals, which symbolized the best grain in yearly agricultural crops. Yet the now universal custom of exchanging each presents on Christmas came to Ukraine from Austria. One of the most popular Christmas customs in Ukraine (western Ukraine especially)- is the singing of Christmas carols. But few people know that the tradition of caroling originated from the Greco-Roman influence in the 4th-9th centuries, when Ukrainian colonization first reached the shores of the Black Sea and the Danube, where it met and mingled with the Greco-Roman world. The very word “carol” comes from the name of the New Year from the Romans, which was a week after the celebrations of the happy festival Saturnalia, which took place in the second half of December.

Christmas in France is undoubtedly the most important holiday of the year for any French family. The celebration of Christmas in modern France stretches for a whole month. Starting on December 6, the day of St. Nicholas, it only comes to an end on January 6th – the day of the King (otherwise known as the day of Epiphany). It is typical for the whole family to attend the Christmas mass, and afterward to get together at the dinner table, which features a menu that is special even by the very high standards of French cuisine. Traditionally, a Christmas dinner consists of a cooked bird, and depending on the region of the country, that bird might be a turkey stuffed with chestnuts, as well as a goose, a rooster or a chicken.

It is worth noting the special attention the French pay to the traditional Christmas dessert. One of them is the La bûche de Noël – a pie in the form of a log, with chocolate and chestnuts, symbolizing the firewood that burned between Christmas Eve and New Year in Périgord. In the south of France, a dessert that is is often served is the Le pain calendeau – which is a sweat loaf, part of which is symbolically given to the poor. Also popular are caramelized chestnuts (marron glacé) that  fill the shelves of French supermarkets during the Christmas holidays.

Little Frenchmen, like all other children the world over, like to receive special holiday gifts. To do this, they put their shoes under a fireplace or under a Christmas tree, which is typically decorated with sweets and small toys, in the hope that Le Père Noël won’t forget to fill them with wonderful things. But there is also Le Père Noël`s evil double – that is Le Père Fouettard (a sinister grandfather with a birch switch). This character has frightened generations of disobedient and capricious children. Le Père Fouettard visits houses where unruly children live and instead of gifts leaves a lump of coal.

Christmas is perhaps also the most popular holiday in the United Kingdom. Traditionally, relatives and friends gather together and give each other presents, but the custom of exchanging Christmas gifts in the UK did not appear until the Victorian era. The first Christmas tree in the UK was put up in 1830, but it only gained real popularity in the 1840s, when Prince Albert, the husband of Queen Victoria, installed a Christmas tree at Windsor Palace. Prior to the the widespread adoption of Christmas trees, the English used a Christmas log. The year before  Christmas a large tree would be chosen in the forest, sawn in half and left to lie until Christmas time. This log would be treated as a living creature, to be watered with honey or wine, and sprinkled with corn. After that, the log would be placed in the hearth and set on fire. It had to burn twelve days and nights. Today the Christmas log of old is often replaced with a thick Christmas candle. 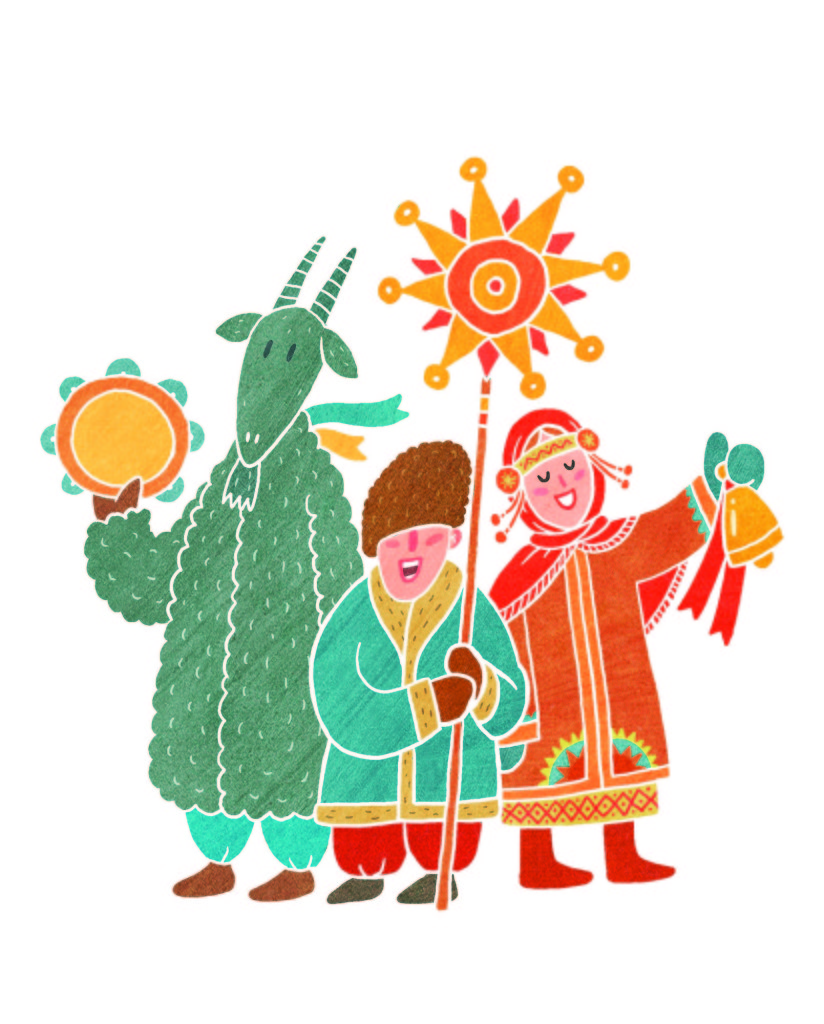 A core British tradition, that of the singing of Christmas Carols can be traced back to ancient pagan roots. Those pagan songs had been sung around stone circles around the winter solstice, with the very word `carol` meaning `to dance` or `song of joy`. Yet another British Christmas tradition has developed very recently however — the Queen’s  annual Christmas speech. Queen Elizabeth began the tradition with her first speech in 1957, and the tradition has been very popular among her subjects ever since — it is now watched by some two billion viewers every year!

Finally, the Christmas traditions of Austria are too colorful not to be mentioned. Austrian children are not visited by an old man with a long white beard, instead they will have a visit from Christkind – the Infant Christ. It is he who represents the essence of the holiday, so he takes care of the little Austrians and gives them gifts. In Austria there is no traditional Christmas tree (Weihnachtsbaum), instead they have Christbaum – Christ’s Christmas tree. This spruce does not look anything like the decorated Christmas trees of other countries. It is typically decorated, with fruits, nuts, candies and gingerbread.

An important event takes place on the evening of December 5, the day before the day of St. Nicholas. This saint appears at the beginning of the Advent and watches to see how obedient the children are.Coming with him is the Krampus – a scary looking devil who carries a tub full of brushwood. It is believed that the most disobedient children can be carried away in his tub. Obedient children on the other hand get sweets from Nicholas: nuts, dates, figs, dried plums, apples or pears. A traditional festive dish eaten by Austrians at their Christmas feast is a carp caught in the Danube. Fried goose is popular. However, the main decoration of the table consists of baked goods ranging from cookies to a kind of vanilla bagel. Even non-religious Austrians will attend the all important Christmas mass.

Children in Austria  prepare for Christmas well in advance. They make a list of gifts. The list is then  put on the windowsill (perhaps with cookies). By morning, this list is taken away by the Christ-infant. Since 1950, Austrian children have been able to send the letter through the mail. The post office  in Upper Austria has been accepting the children’s letters for several decades now. For gifts, Austrians will often go to Christmas markets (Christkindlmarkt).

On the evening of December 24, Austrians will celebrate “der Heilige Abend” – the holy evening. Before dinner, it’s time to exchange gifts. The bell rings to indicate that everything is ready. Only after this, the whole family will enter the room, where there is a Christmas tree. On radio and television, the famous Christmas song “Stille nacht, Heilige nacht” will be performed by the boys’ choir, and the Austrians who have gathered at the family fir trees sing along.

Whichever country you might find yourself in, have a merry Christmas!