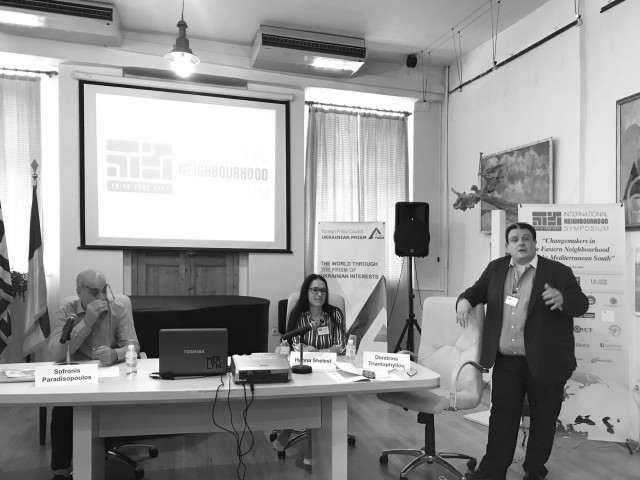 by Dimitrios Triantaphyllou and Hanna Shelest

The International Neighbourhood Symposium (INS) is a labour of love. The road to actually holding it each year is arduous but it is infused with a real faith that tomorrow’s leaders can find ways to work together to resolve national, regional, and global challenges. This project did not begin in a vacuum; its antecedents were similar meetings held in Greece in the 90’s and the 2000’s aimed at bringing to dialogue young leaders from Southeastern Europe and the Middle East respectively on the Greek island of Halki. In 2008, the 1st International Black Sea Symposium was held on the island of Kalymnos, bringing the format to focus exclusively on themes of interest to the wider Black Sea Region.

In 2011, the International Neighbourhood Symposium was born in Istanbul, and evolved into a forum with a focus on both the Eastern and Southern neighbourhoods of the European Union and Turkey. And now, in 2017, we find ourselves for the first time in Odessa, where the INS has, after 6 successful editions in Istanbul, found a welcoming new home.

Each year, the Symposium brings together over 35 young leaders (between 22 to 35 years old). It is more than just a place for presentations of key regional and global challenges with a focus on democracy, civic engagement, gender and youth, hard as well as soft security issues. It also includes a two-day peer to peer workshop aimed at bringing out the best in the participants and creating joint projects with a national and regional focus to address the challenges of our times.

In other words, the Symposium reminds us that there is something about the interaction of participants from different countries and a meeting of generations which results in a commitment to understanding the world and to working together to change it. It is also a space of partnerships as the objective is to have as many like-minded organizations from different countries identify themselves with the Symposium.

This year’s event held on 13 to 18 June in Odessa embodied the best of what the INS is supposed to be. In fact, this year’s theme of “Changemakers in the Eastern Neighbourhood and the Mediterranean South” has proven to be particularly popular as it challenged participants, speakers, and facilitators alike to think outside the box and to utilize their beliefs and deepest values to solving social and societal challenges.

The second reason that this year’s Symposium was very special is that it is a product of true partnership between organizations and individuals across countries. While the INS was conceived by the Center for International and European Studies (CIES) at Kadir Has University in Istanbul, this year it was designed and held jointly by the CIES and UA: Ukraine Analytica and the Foreign Policy Council “Ukrainian Prism”, two Ukraine-based NGOs with an international relations focus. This experiment has proven successful and solidified the trust between the three organizations to the extent that they have agreed to continue their partnership in 2018. In fact, the editor in chief of Ukraine Analytica, a cosmopolitan Ukrainian, and the Director of the CIES, an internationalist Greek, first met on the island of Kalymnos in 2008 during the aforementioned International Black Sea Symposium and have been interacting professionally ever since.

The third highlight of the INS this year was its location – the historic and vibrant city of Odessa which best encapsulates and embraces the multiculturalism that the Symposium seeks to replicate with participants and speakers from over 20 countries ranging from Egypt and Turkey, to Belarus and Lithuania, from Uzbekistan and Azerbaijan to France and the United States. This spirit of a cosmopolitan port city like Istanbul is very much in evidence on a smaller but more intense scale in Odessa, as its multiculturalism is still embraced and is not just a remnant of the past. In fact, holding the first part of this year’s Symposium on the premises of the Hellenic Foundation of Culture and the Filiki Etairi,a and the second part at the historic Londonskaya Hotel in front of the newly-inaugurated Istanbul Park was symbolic of creating synergies across borders.

The Symposium brings together an eclectic group of speakers and experts from all over the world to debate with the participants and present their own analysis on topics of interest. The session focused on relations between representatives of the cities of Odessa and Thessaloniki and how both cities seek to promote their historical multiculturalism, as well as the role of their citizens in this quest. This was especially inspiring, as was the session on civic engagement and democracy with experts from Greece, Turkey, Ukraine, Romania, and Egypt sharing their experiences and motivating participants to join their ranks. Other interesting panels included a discussion of global security challenges by the Rector of Kadir Has University, Mustafa Aydin and the Director of NATO IDC in Ukraine, Barbora Maronkova. There was also session on how to conduct journalism in the era of fake news by the Head of Hromadske TV, Natalia Gumenyuk, and a debate on the state of the Eastern neighborhood with contributions by the former Austrian MEP Hannes Swoboda and the former Ukrainian Ambassador S. Korsunskiy.

The high level of dedication shown by most participants, with their avid interests and intense level of participation, their challenging questions, and their commitment to taking part in the peer-to-peer workshops is undoubtedly the main highlight of the event. Yet, their commitment to knowing each other continued beyond the Symposium’s official hours. Watching an Azeri participant walking in engaged discussion with her Armenian counterpart down Deribasivska Street was a touching epilogue to this year’s event.

As Ghandi pointed out “the future depends on what you do today”.  At the Symposium, we take those wise words to heart.

Dimitrios Triantaphyllou and Hanna Shelest are organizers of The International Neighbourhood Symposium.