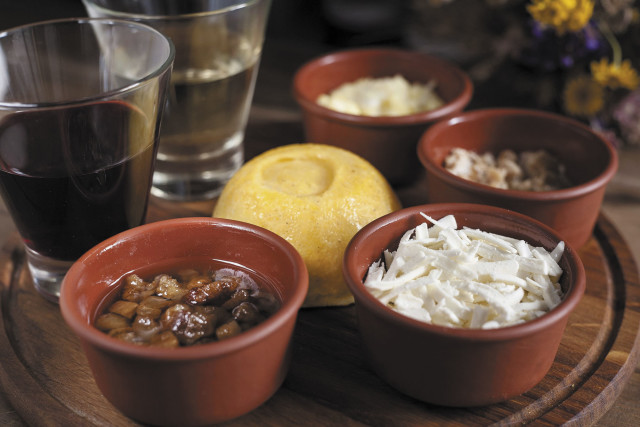 The former soviet leader Nikita Khrushchev, after visiting the United States and seeing the impressive profits of corn cultivation, tried to promote corn production in the Soviet Union. A huge public campaign was launched. Corn was presented to the public as the “queen of the fields.” But in Moldova and in South Ukraine, there was no need for propaganda – corn had always been a staple food for people in the region.

We are speaking naturally of mamaliga: a superior and healthy dish prepared with corn flour. Mamaliga is a very close relative of polenta and just like the Italian polenta, mamaliga is both delicious and simple to make!

Water is boiled in a cast iron Dutch oven (known as a “kazan” in Ukrainian cuisine), adding a little corn flour and stirring. After that, the water is brought to a boil again, adding more corn very slowly, letting it flow from the hand into the water, stirring with a wooden spatula at the same time. Now, for the most difficult part — you need to stir the dish for about 30 minutes until the corn mash separates from the side of the bowl. And with that your mamaliga is ready! Turn it over on a wooden plate and cut it like you would a cake with a piece of cotton string.

Mamaliga is a family dish that brings people together at the table. In rural areas, it is very often eaten just with the hands, without a fork or knife. To enjoy it in this way, take a piece of mamaliga, roll it by hand into an egg shaped ball, and dip it into cream, grated cheese or any one  other sauce that you  may like. In Moldovan tradition, a good hostess must offer as many mamaliga condiments as she can. The most common additions are: grated local sheep cheese “bryndza,” sour cream, fried pork, garlic sauce, stewed onion and vegetable ragout.

It is a commonly held opinion that mamaliga is a 100% Moldovan dish. This is true in terms of its origin, but not entirely in terms of its prevalence today. When I interviewed people from different regions of South Ukraine about the food habits in their families in the middle of the 20th century, nearly all of them mentioned mamaliga as one of the main dishes on their table. This was not only in Moldovan cities and villages, but the same in Ukrainian, Bolgarian, and Gagauzian regions. In many Odessan families as well, mamaliga was very common until the end of 20th century.

The history of mamaliga is not a totally clear one. Possibly it may be connected with polenta and its forerunner, ancient Roman dish “puls” — a kind of cereal mush that was one of the main dishes in those times for most of the inhabitants of the Italian peninsula. In late medieval times, mamaliga was presumably well-known in Moldova but was prepared from millet instead of corn. The very same dish in Ukraine was called “kulesha,” with a popular variant “kulish” being part of the Cossacks military campaign cuisine. Kulish was more soupy than mamaliga, and could contain additional ingredients like meat or vegetables to make it more nourishing. In Ukraine, there is another kind of mamaliga that is cooked in the Carpathian mountains and called “banosh.” The specialty of banosh is using cream instead of water for preparation.

Mamaliga is a very common and even ordinary dish for the Bessarabian region. Such everyday dishes are often taken for granted, but mamaliga can be appreciated even in the context of modern healthy and natural diets. For example, corn, the only ingredient of mamaliga, is one of the few cereals that is gluten free. So don’t be afraid to take a delectable taste of this precious, golden dish!