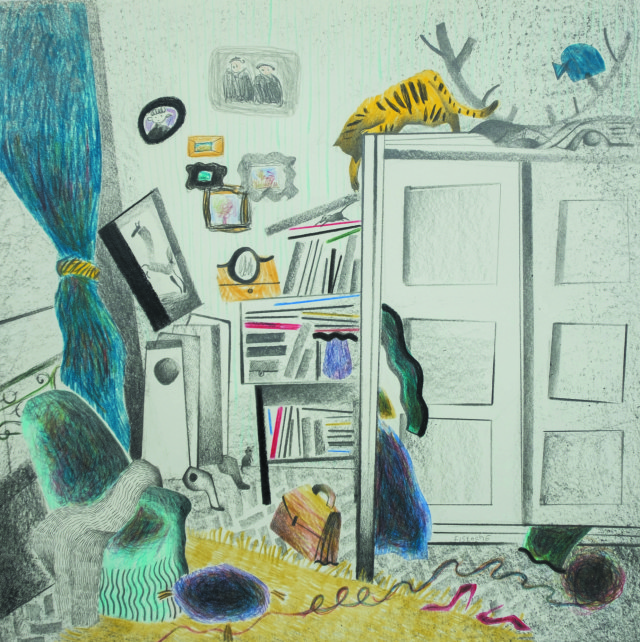 The Odessa Review’s managing editor Regina Maryanovska-Davidzon met up with the well known Ukrainian writer Irena Karpa in a Paris Cafe. The singer and song writer of the band Faktychno Sami, she has written ten books as well as being the cultural attache of the Ukrainian embassy in Paris. She and her friend Fifi Bristoche (a pseudonym for a Paris based Ukrainian photographer and illustrator) met with The Odessa Review to discuss the publication of their new children’s book “Louys And His Monsters.” 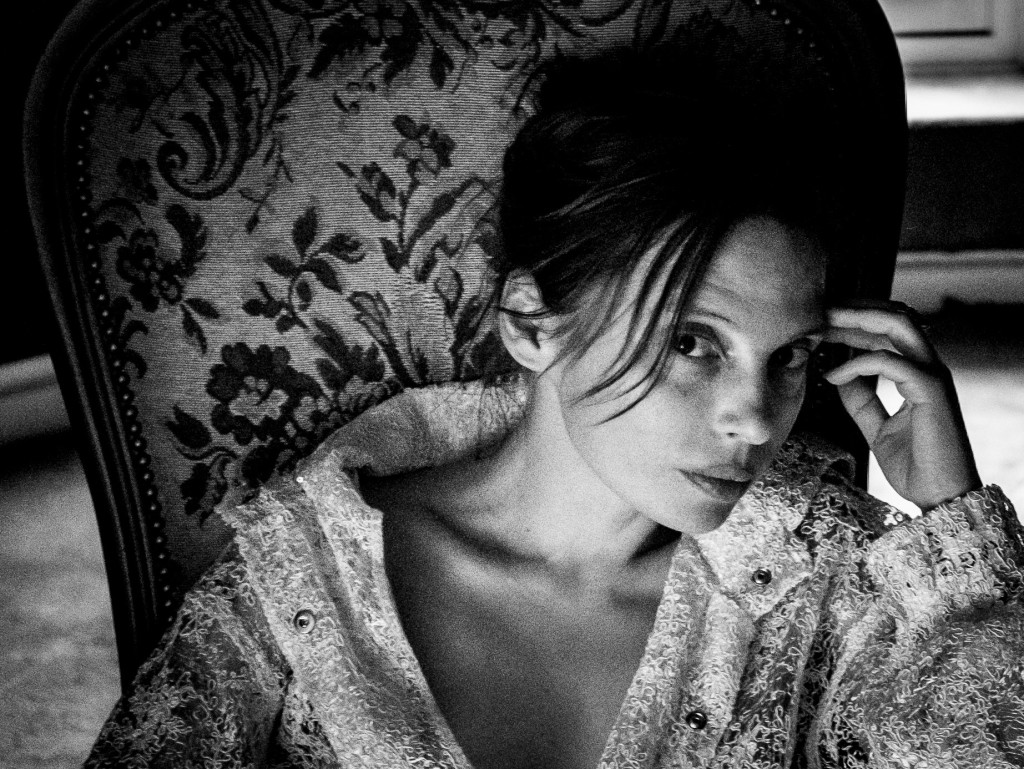 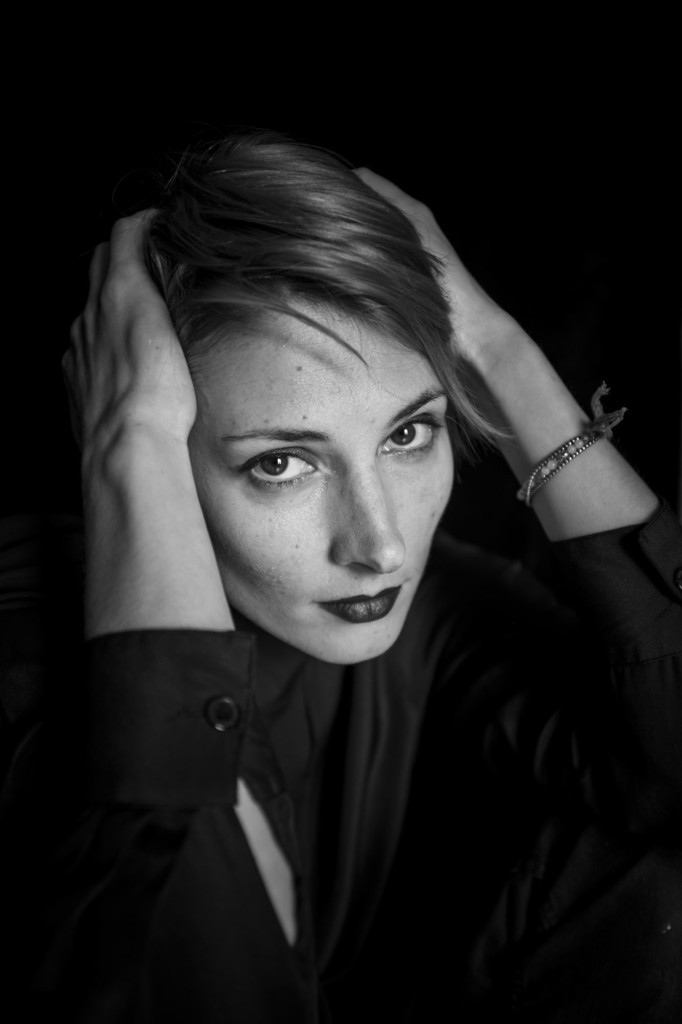 The Odessa Review (Regina Maryanovska-Davidzon): Please explain how you arrived at the idea of collaborating on a book?

Fifi Bristoche: The book is based on the nightmares of my 9-year-old son Louys. It is about the monsters whom he has to fight. We took him to a child psychologist, and after that we came up with the idea of illustrating his dreams.

Irena Karpa: I joined the project when the illustrations were already prepared. It was easier to write the text when the story had already been completed.

OR: Is the book more intended for Ukrainian or French readers?

Irena Karpa: If you look at the subject matter, in that case it is written more for Ukrainian readers. In French children’s books, there is often a lack of plot, and there are usually only captions accompanying the illustrations. But here we are facing various challenges, which we must overcome or find a way to peacefully coexist with.

Fifi Bristoche: Regarding the artistic elements, these are probably closer to what French readers are accustomed to. Unfortunately, much of the children’s literature in Ukraine has interesting stories but a very weak artistic approach, and because of that we often don’t want to buy this or that book. I think that this book will interest both children and adults. Each person has their own monsters, and must learn to live peacefully with them.

OR: Is this your first children’s book?

Fifi Bristoche: I have done many illustrations, but this is my first book. My other illustrative works are waiting for their time. And I hope that I will have still more new ideas.

Irena Karpa: I’ve previously written one children’s book about squirrels, which I need to publish soon. I have two children, but I am not able to tell them fairy tales. My children interrupt and compose their own stories in the process.

OR: Have you read this book to your children? How did they react?

Irena Karpa: My daughters were the first I read the text of the book to. They loved the story. They are better than any critic. When we visit Louys and Herman, one of them asked me “Are we going to visit that boy who scared himself?”

Fifi Bristoche: My children laughed. Especially at the part where Louie is already grown up and doesn’t sleep with his parents. In reality, he still comes running to our bedroom when he has a nightmare.

OR: When do you plan to release the French version of the book?

Fifi Bristoche: We are currently in talks with different publishers here in Paris. For now, I myself am translating the text into French as my daughter reads it out.

Irena Karpa: The most important thing is the value of the illustrations. If the publisher is interested in illustrations, then we are already halfway to publication. I think that after the release of the book in Ukraine, the process here will speed up.

OR: What is the relationship between this book and your previous work? What has the process of evolution been like from that to this new work?

Fifi Bristoche: All of my books I write for my children. And they have actually evolved with them — with their age, with their ideas and the events of their lives.

Irena Karpa: I Always wanted to be an author of children’s lit. In my opinion, it is way more difficult to write well for kids than for adults. To be credible, if you know what I mean. Children hate texts that are fake, written on purpose, just to please or to be bought. They have great intuition. That is why it is important to write something only when you feel it is right in your heart. And when you do it with a good sense of humor. This story is absolutely true, because it was initially invented by one little boy. Then his mom made drawings, and then a writer friend of his mom (that is, me) wrote the text.

OR: Can you speak about being young and creative Ukrainian women living in France? What was the immigration process like?

Irena Karpa: I guess being young and creative is the best thing that can happen to anyone. Being a woman sometimes make things a bit more complicated. For example, in my case I don’t have a non-working wife who could take care of kids and so on, so I could calmly create my artwork when I am done with my regular, salary-paying work. But Paris in general is one of the best places to be when you are interested in art. Of course, it is sometimes too bourgeois and expensive, one may prefer Rennes or lately Leipzig. But still it is so rich in all sorts of art shows, cinema, theater etc., that you feel grateful to Paris every day for its ideas and inspirations.

Fifi Bristoche: For creative people on their own it is often difficult, regardless of the country, in my opinion. For me, the process of immigration is not yet over, but remains in limbo. Such is life.

OR: How is living away from Ukrainian national culture, living in the diaspora, effected your work, and the sorts of issues that you attempt to solve as a creative artist?

Fifi Bristoche: Personally, a year after leaving I stopped communicating with Ukrainians and didn’t search for Ukrainian support network or relationships in Paris. For me, communication with people needs to begin with a similar mindset, not a common language. How this manifests in my art is up to my audience to decide. I can say that my art style has certainly changed.

Irena Karpa: I don’t think we ever lost contact to our Ukraine. By that I mean young, post-revolutionary, young and fearless people. We always try to bring young and high quality artists to France, designers, painters, musicians. We have our own diaspora here – musicians, artists, DJs, curators — that helps a lot. Still, we need to go to Ukraine occasionally to hear and see what’s new in Kyiv, this new sort of post-industrial Berlin it has become.

OR: France is one of the greatest places on earth for an artist to live…. tell us something about the forms of inspiration that living in France has on your cultural output?

Irena Karpa: I find inspiration in very simple things. Like sitting at the terrace and watching people. Listening to their conversations. Reading their emotions in the context of the city streets. Paris is not only a movable feast, as Hemingway wrote, it is an ever-lasting movie, and it is great to have this possibility to live inside of it.

Fifi Bristoche: The French know how to live in contrast to us… all the time, I am in a rush, and I’m unable to live in the moment. I’m trying to learn how, but I’m not very good at it. And maybe that’s fine?

OR: What do you think that contemporary Ukrainian culture can learn from contemporary French culture? What do the French do better than we do in Ukraine?

Fifi Bristoche: We can learn how to broaden our definitions of ideas and to view things from different perspectives. And since culture is implanted during childhood, we should observe how the French raise their children, so that Ukrainians can teach them to have purpose.

Irena Karpa: Every culture has its own path. We don’t need to learn or to copy. We need to observe and to create our own way, original and relatable for Europe, as the language of culture is universal.