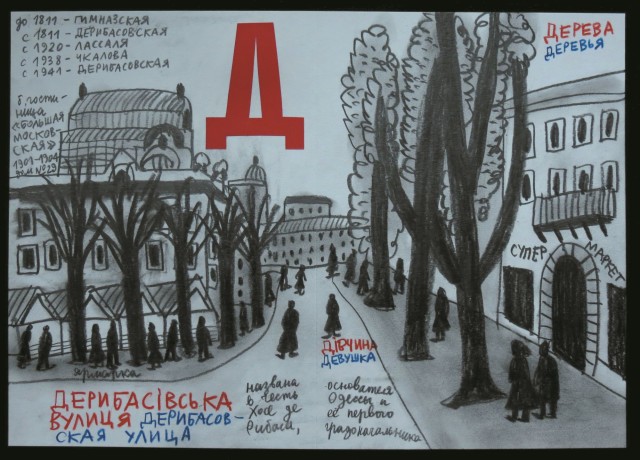 At the end of 2016, there were multiple mentions in the Ukrainian media that an artist originally from St. Petersburg and living in Georgia, Alexander Florensky, had created an “Odessa Alphabet” illustrated with images of Odessan sites and architectural landmarks. Even at first glance, the originality of the alphabet’s style is evident. Simplicity, sincerity, humor — those qualities are felt here, as well as in many other works by Florensky. The alphabet resembles sketches of a curious traveler much more than a classic publication of that kind. A Painter, illustrator, art director of animated films, Florensky was born in 1960 in Leningrad and graduated from the Leningrad Vera Mukhina Higher School of Art and Design (now the Saint Petersburg Stieglitz State Academy of Art and Design). One of the founders of the art group “Mitki”,  he was the illustrator of various books by eminent writers such as Sergei Dovlatov and Boris Grebenshchikov. The Odessa Review decided to get better acquainted with the well-known artist who depicted Odessa in 33 drawings. 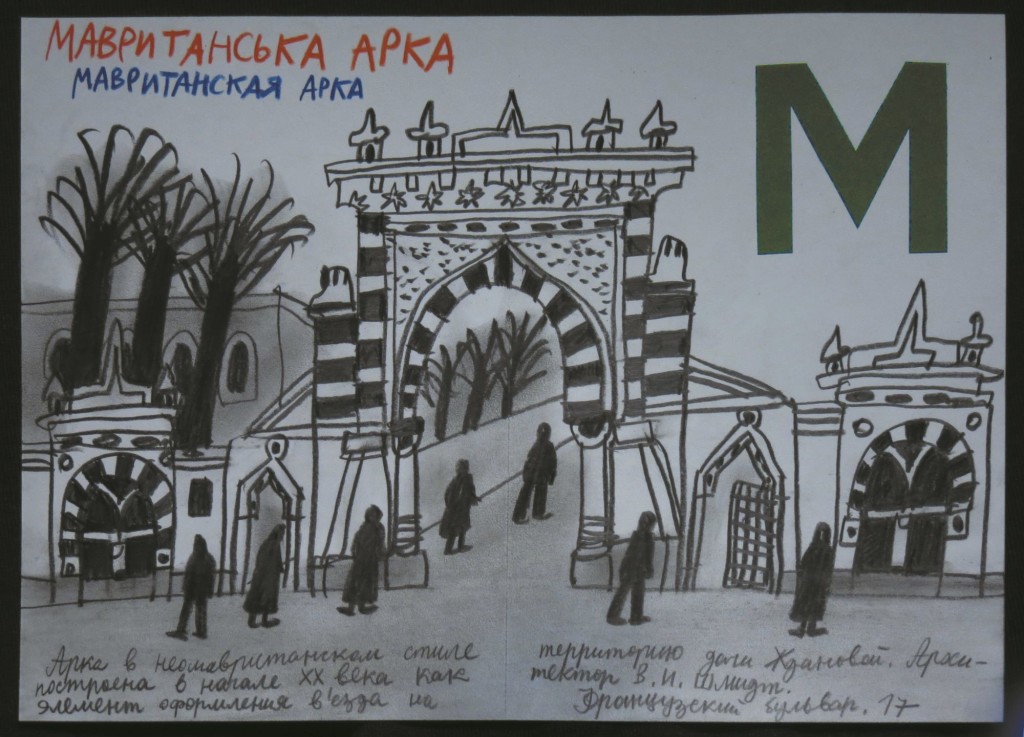 The Odessa Review (Vadim Goloperov): How did you get the idea of creating your Odessa Alphabet?

Alexander Florensky (AF): By the time of my arrival in Odessa, I had already completed the “Jerusalem Alphabet,” “Tbilisi Alphabet,” “Saint Petersburg Alphabet,” “Voronezh Alphabet,” “Montenegro Alphabet,” and “New York Alphabet,” so this project has been ongoing since 2011. I had always wanted to make books about Odessa and Kyiv. First of all, I like these cities, and secondly, I wanted to work with the Ukrainian language. My desire to do this was made more urgent in connection with the war imposed on Ukraine by Russia, and I wanted to express my position on the issue in the form of a work.

I wrote about my idea on Facebook, and in less than a few hours, I got a response to my question “If anyone in Ukraine was interested in such a book?” from the  Kyivan publisher Christina karminsky, who was in fact interested in two Alphabet books. One for both Odessa and Kyiv. We began to correspond, discussed the details, and so for the entirety of November 2016 I lived and worked in Odessa, and all of December — in Kyiv.

OR: How did you choose which Odessa landmarks would be illustrated in the Alphabet? Do you see the object and it inspires you immediately with it’s look, or is it also important to you that there is an interesting backstory to it?

AF: I’ve been to Odessa before, but usually very briefly, so most sites and landmarks were new to me. I got a lot of help from my student (a former Odessite now living in St. Petersburg), who is painter and a graduate of the Grekov School, Irina Roon. She agreed to come with me to Odessa and to show me and tell me everything she knew herself. That is the way in which I gradually got to know the entire city. Sometimes I’m just interested in the object itself, when it is very beautiful or attractive in some way. Often, these are not well-known landmarks, many of which I did not mention in the book at all, but houses or streets that appeal to me personally even though they are nothing special from the general point of view. Sometimes, the place can look ordinary, but its background is fascinating: the home of the famous writer Zionist Jabotinsky would be just one among a hundred others for me if I didn’t know it’s history.

OR: Seeing as you are creating an alphabet, here is an important question: do letters inspire you as images/signs? And what about words?

AF: Without a doubt, both the letters and the words are important. In my drawings, letters and words have an equal significance to the image, they can’t exist without each other. I choose the language for my short commentaries very carefully, and I always avoid any personal evaluation — no lyricism. Some objects get into the book because of their appearance and some, because of their name. So, the image and the word are firmly soldered together in my books, sometimes you can not tell which of them is more important.

OR: The Odessa Alphabet reflects the Ukrainian alphabet. Do you speak Ukrainian? Do you understand this language?

AF: Unfortunately, I don’t speak Ukrainian, but it seems to me that most Odessans do not either. When simple things are said to me, of course I understand, our languages are related, you get Ukrainisms in Russian and Russianisms in Ukrainian, it’s inevitable. I did discover a lot of Ukrainian words while working on the book, so it was useful in that sense as well.

AF: Actually, the first time I was ever in Odessa was as a child of ten, in 1970. Although my memory of that time is rather vague (of the landmarks, I only remember the Potemkin Stairs and the statue of Richelieu), but pleasant. As I already mentioned, I was also in Odessa briefly a few times in the 1990s, as a participant of the animation CROC Festival. Those memories are quite distinct and also very pleasant, and it was always a pity that the ship on which the festival is held would stay in Odessa too briefly.

AF: I liked almost everything — this delightful city miraculously remains nearly untouched by modern architecture (at least in the center), which is striking. But, of course, I feel very sorry for neighborhoods like Moldavanka, that retain very little authenticity due to the inclusions of monstrous high-rise buildings. It is sad that the capitalists have defaced the city more than the Communists and the Nazis together… Alas, this problem is not unique to Odessa, but is a worldwide phenomenon.

OR: Was your work on the Odessa Alphabet memorable in some way? Did some interesting stories happen to you in Odessa?

AF: Most of my work consisted of walking around a beautiful city with a camera and my wonderful companion — of course, anyone would find such work memorable. Even the weather was good the entire month…  Somehow, no interesting stories happened — and thank God for that, I really dislike the common and widely imposed notion that Odessa is a city of some specific humor, jokes, pranks and funny stories. In my opinion, it’s a tired cliché. It’s a regular city, just a very beautiful one! 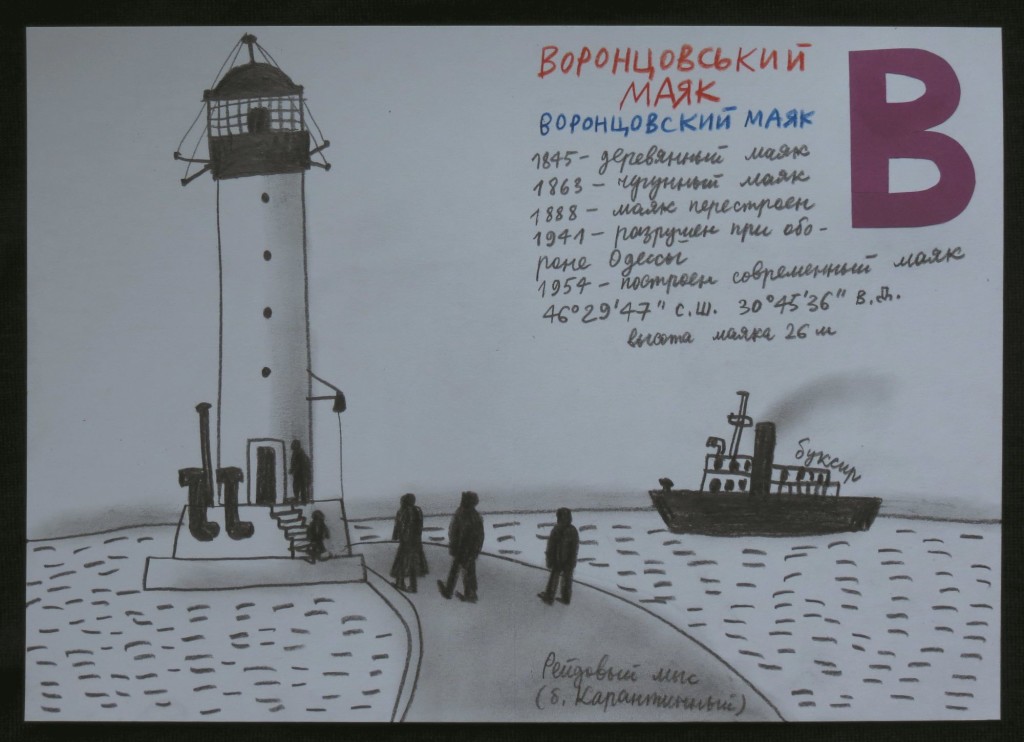 OR: Did the alphabet help you get to know Odessa better? Did you discover something new in it?

AF: You could say that everything was new. What I had known and remembered from previous visits, I saw again, with fresh eyes. The most delightful discovery for me was the locomotive depot of Ungern-Sternberg, a stunning monument to industrial architecture in urgent need of salvation, because unfortunately it is in a very dilapidated condition.

OR: Do you have any creative plans, ideas related to Odessa?

AF: I haven’t given this subject much thought — but I think I could enjoy living in Odessa another month or two, doing some painting of the Odessa cityscape. For example, I would love to spend even a full month without leaving the port of Odessa, drawing my favorite subjects — ships, berths, lighthouses, and such.

OR: Do the cities that have been the subjects of your illustrated alphabets have something in common?

AF: Perhaps just my sincere and enthusiastic admiration for them, after all Odessa and New York have little in common. Although, you could find aspects of resemblance between Odessa, Tbilisi and St. Petersburg. Several times in Odessa I had a feeling that I was in Tbilisi — especially at the flea market — and sometimes a central Odessa street like Rishelyevska is indistinguishable from a similar street in St. Petersburg.

OR: The first impression from your work is one of simplicity, naïveté, a kind of infantilism. Are those qualities close to you?

AF: Well, simplicity is the most important quality of true art. “Praise to the creator, who made all the necessary things simple, and all complex things — unnecessary.” In art, I like naive painters: the Georgian Niko Pirosmani, the Frenchman Henri Rousseau, the Ukrainian Polina Raiko, the Englishman Alfred Wallis, the Pole Nikifor, the Russian Pavel Leonov, the American James Castle and many others.

OR: Seagulls, crows, mice, cats, dogs… Why do your works often depict animals?

AF: The answer is simple: these animals are full-fledged residents of the cities, and often catch my eye in the streets, in Odessa especially. By the way, I noticed a curious phenomenon — all street cats in Odessa look incredibly well-fed. I think it speaks well of Odessites!

OR: Your avatar on Facebook reads: “For a great deal of money, a renowned St. Petersburg artist Alexander Florensky will create a work of art.” Is this just irony or a kind of message to the world?

AF: It’s not even irony, it’s self-irony. I’m not that renowned and my works don’t cost such a great deal of money. Since you’re asking, I will say that I couldn’t demand a fee for my work on the Odessa Alphabet and the Kyiv Alphabet — while my country is at war with Ukraine, I think taking money from the Ukrainian side is immoral. So in reality, my slogan should be taken to mean the opposite: “For just a little money, a not very well-known artist Alexander Florensky will create a work of art.”

Small Is Beautiful Is Not Just A Slogan: On American Artist George-Ann Gowan...