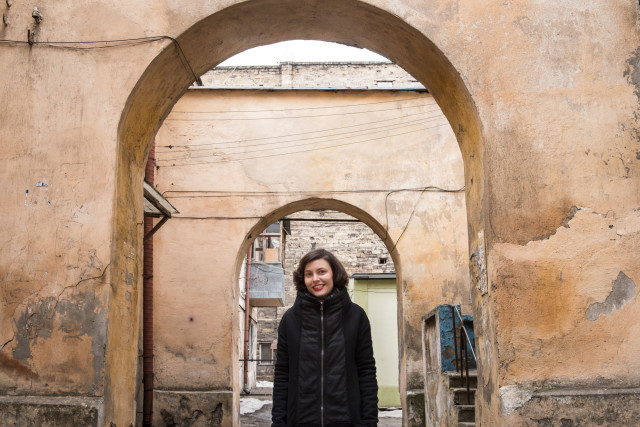 My choice of a favorite spot in Odessa is prosaic — it’s 5a Oleshi Street, and I live here. This used to be quarantine housing, there are two arches connecting the two buildings. It creates a great perspective: photographers from all over the city come to shoot weddings here, music videos. The morning light is beautiful here. It reminds me of an Italian courtyard, maybe in Rome, you’re walking along and someone is yelling “Antonio!!!”

There’s enough yelling here too. I have real Odessan neighbors: babushkas that ask all guests “And where are you going?” and inform anyone coming to see us if we are at home, or out of town. Occasionally there are problems with utilities and when a pipe bursts or something, our favorite neighbor calls all the housing services, she is very formidable, an authentic Odessan woman, full makeup and everything.

The place is kind of trashy, though in an artistic way. We spoke to a local representative, he said it’s too expensive to reconstruct, but we still think it can be cleaned up and restored. There is an architectural prize, the “Golden Arch,” because the arch is a symbol of Odessan courtyards and Odessan childhoods. A child’s freedom is usually limited by the arch — “Don’t go past the arch! You can play in the courtyard!”

It would be nice if this became the kind of courtyard where I would be happy to let my kids play by themselves. I’m hoping it will get a facelift: not a new image, but an improved old one. Aesthetically pleasing, retaining archaic details and textures, but refreshed with new elements. As an architect, I see the potential of the place. We could clean it up, plant some greenery, replace the pavement with the right kind of brick, put in new communications, benches and streetlamps… Tourists regularly come through the courtyard, tour guides have something to say about it — I don’t know what, but apparently there is something in its story.

My most vivid memory is of a photoshoot here — we did a sort of “Dolce Gabbana family” setup. There is often laundry hanging: blankets with tigers, sheets with kittens, pillows with flowers… One time, I was running to work, and had to make my way through draped white sheets, while some singer was filming a music video. It’s great here when there’s snow on the ground, covering the ugly bits, and of course fantastic in the summer. Further in, you can see a spiral staircase, also photographed often. I’ve lived here for 7 years now. When we first found the apartment, I saw the two arches and thought: “This is it, we’re done looking.” We realized that we’d have to invest in repairs and improvements, but we decided we were willing to bear that burden. Who, if not us, would take care of this place? It’s a pity, and I’d like to restore it for everyone to enjoy. It is Odessa, this authentic, aged woman without cosmetic procedures, detox or Botox, but I think with proper care she can look quite well enough.