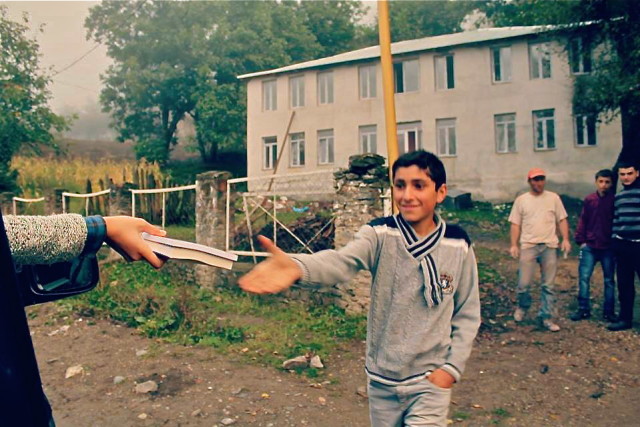 An American long active in Georgia writes about his organization, which is dedicated to connecting the small Georgian nation to big ideas around the world.

Nations change, transform, are subsumed, and reemerge. As they do this to themselves and have it done to them in turn, the issue of identity stays topical. Who are they and what is their narrative? What distinguishes them from others? Particularly their past masters and close neighbors? But along with those identity questions there also exists the issue of a nation’s connection to the the rest of the world. Just like individuals, as nations go about the task of figuring themselves out, they also need to identify and consider the big ideas that are circulating around the world,  and to figure out what those ideas mean for them. Separating what is useful from what should be rejected is often not easy. Nations must look back but they must also look forward and they need to do both in their own language.

With ever falling barriers to entry, the internet is now the predominant place to hear about new ideas. Yet for every big original idea that echoes around the internet there is vastly more commentary and reinterpretation, much of which is nowhere as cleaver, accurate, or interesting as the original idea. And the smaller the language, the bigger this problem typically gets. This is in part because of the low entry barriers. The English internet is very different from the Arabic, Russian or Turkish internet. And let us not forget those curious, active people who are not on the internet, because of their age or financial limitations. How can they connect with those big ideas?

This is a particularly big problem in Georgia. The Georgian language is unusually rich in terms of its descriptive capacity, but it is small and fiendishly complex. Only a handful of non-Georgians know it. Almost everything written in the Georgian language was written by a native speaker. Some translations exists, but much of it is of low quality, old, on uninteresting topics; and books can be expensive.

For the past several years, Radarami has addressed this problem by translating recent zeitgeisty non-fiction books into high quality
Georgian, and distributing free print books to libraries in villages throughout the country. These are for sale in bookstores as well (for less than an American dollar), but the main distribution channel is via libraries. There are many libraries in Georgia, but due to chronic under funding they rarely receive or can afford new books.

The target group are the almost half of the Georgian population who spend very little time surfing the internet and who can only read easily in the Georgian language. These people typically have little disposable income. Certainly those who are fluent in other languages, have a constant internet connection, and live in urban areas are an important group and many of them read Radarami books, but they have channels into global conversations via other routes and are not our primary target. Some have claimed that the answer to the problem should come via digital technology because the cost of distribution is so much lower. Perhaps, but paper books can mix well with technology. We have created a short code for text messages so readers can text in to let us know where they are. But we believe that traditional bound books, in terms of ease of use, discoverability and share-ability have many advantages as well.

Of course course not everybody reads or wants to read books. Most people get their information from Television or from chatting to neighbors and friends. But Radarami believes that those who seek, find, read, and discuss books are a very important and powerful group in any society. Money, language or one’s living location should be no barrier to taking part in the global conversation. Our goal is to help Georgians connect to that conversation.

Mark Mullen, long time resident of Tbilisi, is a founder of Radarami.

Popular Books published by Radarami include:

Switch: How To Change Things When Change Is Hard By Chip And Dan Heaths,

Being Wrong by Kathryn Schulz

Bloodlands: Europe Between Hitler And Stalin By Timothy Snyder,

Globalization And Its Discontents By Joseph E. Stiglitz