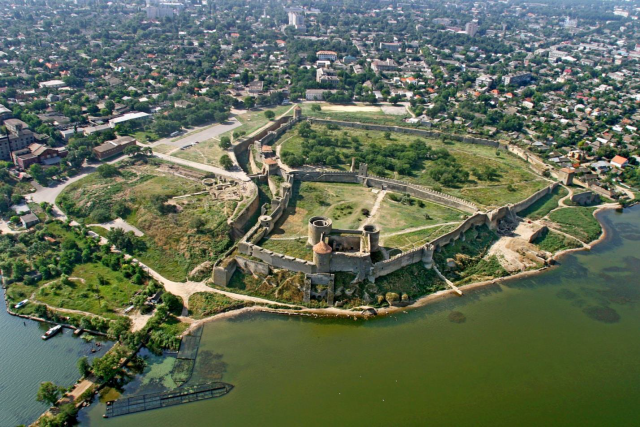 The expansion of Ancient Greek culture on the coast of the Black Sea, Roman excursions into Asia, the invasions by Scythians and Sarmatians, the Great Re-settling of Peoples, occupations by the Huns and Mongols, the establishing of the Osman Empire…the ancient stones within the walls of the Belgorod-Dnestrovsk fortress remember all this – and more. Put your hand on one of these ancient stones and close your eyes – and perhaps ancient images of bygone eras will begin to flow through your mind…

Belgorod-Dnestrovsky (known as Akkerman up until 1944) is one of Ukraine’s oldest cities. According to UNESCO, it is one of the word’s ten oldest cities which have existed, uninterrupted, from their creation to our days. The Belgorod-Dnestrovsk fortress, located in the city, is an exceptional monument of military architecture and the largest fortress in all of Western Europe. These facts alone are enough to make this unique location – situated a mere 90 km from Odessa – a magnet to all history lovers. The modern Belgorod-Dnestrovsky is a laid-back, provincial town. However, its hidden jewel – the fortress – continues to amaze visitors with its massive dimensions and majestic grandeur.

The history of Belgorod-Dnestrovsky, which is more than 2,500 years old, is an endless string of wars, battles and constantly changing rulers. The city’s history can be separated into roughly four periods: Hellenic, Medieval, Osman, and Russo-Ukrainian. It is believed that the city was founded around 500 BC by Greeks from Miletus, and the original name it received was “’Tyras”. Tyras was subject to regular attacks from neighboring tribes such as Scythians, Sarmatians, and others. It was due to these unrelenting attacks that the Greek dominion of the city finally ended around 50 BC.

After that, the city would change rulers many times. It was destroyed and rebuilt repeatedly. With each resurrection, it would also be given a new name: known as the Roman Album Castrum (White Castle), Slavic Turis and Belgorod, Mongol Ak-Libo, Byzantine Moncastro and Asprokastron, Moldavian Chetatya-Albe, Turkish Akkerman. In the 15th century CE the construction of the fortress which stands to this day began amid the ruins of ancient Tyras. The work was began by Genoese and Moldovans, and ultimately completed by the Turks. Later, during the 18th and 19th Centuries, a series of wars over control of the northern Black Sea cast took place between Turkey and Russia. As a result, on May 16th 1812, the city (then known as Akkerman) became part of the Russian Empire, and then of Ukraine.

It is interesting to note that one of the fortress’s towers bears the name of the Ancient Roman poet Ovid. The reason behind the dedication is Emperor Augustus’ order to exile Ovid to the Black Sea coast, where the poet would later die. Historians have determined that Ovid lived in the city of Tomis (now Constanța, Romania) in the year 8 CE. According to legend, he visited Tyras frequently, was poisoned there and is even buried on the outskirts of the city. It is impossible to verify these claims historically, as neither the poet’s true cause of death nor the location of his gravesite have been determined. In the late 18th century, a Russian officer announced that he had found a headstone engraved with the name “Ovid” in Tyras (Akkerman), however the mysterious headstone was soon lost and thus the officer’s claims were never verified. Nevertheless, the Russian Empress Catherine II issued an order to rename a neighboring Turkish city, Hadjider, into “Ovidopolis” to honor the legendary Roman poet as well as the rumored location of his last days.

Today, the fortress often serves as a filming location, a venue for concerts and festivals, the scene of historical reenactments, fencing and swordsmanship competitions, and medieval tournaments (“the Sword of Moncastro”). An archeological museum and an exhibit of throwing weapons and firearms are also located within the fortress grounds. For an additional charge, tourists can enjoy the experience of manning and firing medieval cannons and crossbows.

The Akkerman fortress, to this day, is home to a multitude of secrets and mysteries. Unexplored subterranean catacombs and tunnels abound under the ancient citadel’s floors. At times, its inner courtyard seems deserted and lifeless; but if you focus on the silence and let yourself drift away amid the ancient stones of the fortress walls, frozen history comes to life as images of countless battles, wars, and changing cultures – all blending together to bring us to the modern day – flash through your mind.