In May 2017, H.E. Marie Louise Yovanovitch, the 9th United States Ambassador to Ukraine, invited the artist George-Ann Gowan, a longtime friend and a resident of her native Kent, Connecticut, to participate in their second joint public diplomacy project. This was organized under the aegis of the U.S. State Department’s “Art in Embassies”  program. The global visual arts program was formalized by President John F. Kennedy in 1963. It is a public-private partnership engaging over 20,000 participants globally, including artists, museums, galleries, universities, and private collectors, to create at least sixty temporary exhibitions per year and curate the permanent collections of the Department’s diplomatic facilities throughout the world.

Connecticut born American artist George-Ann Gowan is quick to identify herself as a cultural diplomat. ‘I realize how meeting just a single person from another country can change one’s perception of that place’ she explains. Over the course of a short working visit to Ukraine she meets with local artists, museum and gallery professionals, academics and students, immersing herself in the local visual culture while giving lectures and workshops, and sharing openly her experience as an artist and a woman who used creative resilience to overcome personal tragedy and inspire others.

George-Ann Gowan’s artist production is archaeological in character and it burrows into America’s colonial history to reveal intimate truths about the artist’s own life. There’s a fluvial quality to George-Ann Gowan’s work, which, like her beloved Housatonic River, collects the debris of bygone eras and refashions it into motley and elegant displays. Old photographs and ephemera, toy soldiers, figurines, optical instruments, old fashioned tools, loosened architectural details, bird cages and stuffed birds, decanters and incense holders are all assembled into historically suggestive assemblages that reimagine the material embodiment of the colonial American past for a contemporary audience. Small symbolic flourishes entice the viewer to discover more about the history of her native New England: a little tin sperm whale (the official Connecticut state animal) alludes to a proud naval past (indeed, the artist’s father was a naval officer) while Gothic Americana, a recurrent trope of the artist’s work, reminds us of the first Puritan colonies.

It is invariably true that elements of George-Ann Gowan’s work make for great diplomatic talking points. Both the diplomat and the artist engage tirelessly with the many Ukrainian guests at the program’s inaugural reception. They tell the Ukrainian guests about the way of life in one of the Constitution State’s oldest and best known villages. With a population of mere thousands, Kent has nonetheless produced such household names as Seth MacFarlane, Oscar de la Renta, and Lana del Rey, and has an abundance of art galleries that cater to the discerning collectors of the region. The artist recounts the whirlwind of impressions from her stay in Kyiv, impressed by the lush green spaces of the city, and having been left deeply moved by the Holodomor Memorial and Eternal Glory Park. She is naturally also left reeling by Kyiv’s rich museum collections: ‘The story of Ivan Honchar [Ukrainian artist and ethnographer, and folk art museum founder] saving an entire cultural history basically singlehandedly is unforgettable…’ she   muses reverently. Honchar’s son Ihor is among the guests at the diplomatic reception and he talks to Gowan about his plans for a museum dedicated to the 2013 [Maidan] Revolution of Dignity. The Ambassador and I take a moment to leaf through an Eric Sloane book from her personal collection which bears a dedication in a relative’s hand, marveling over the artist’s visual history of covered bridges and New England hex signs. 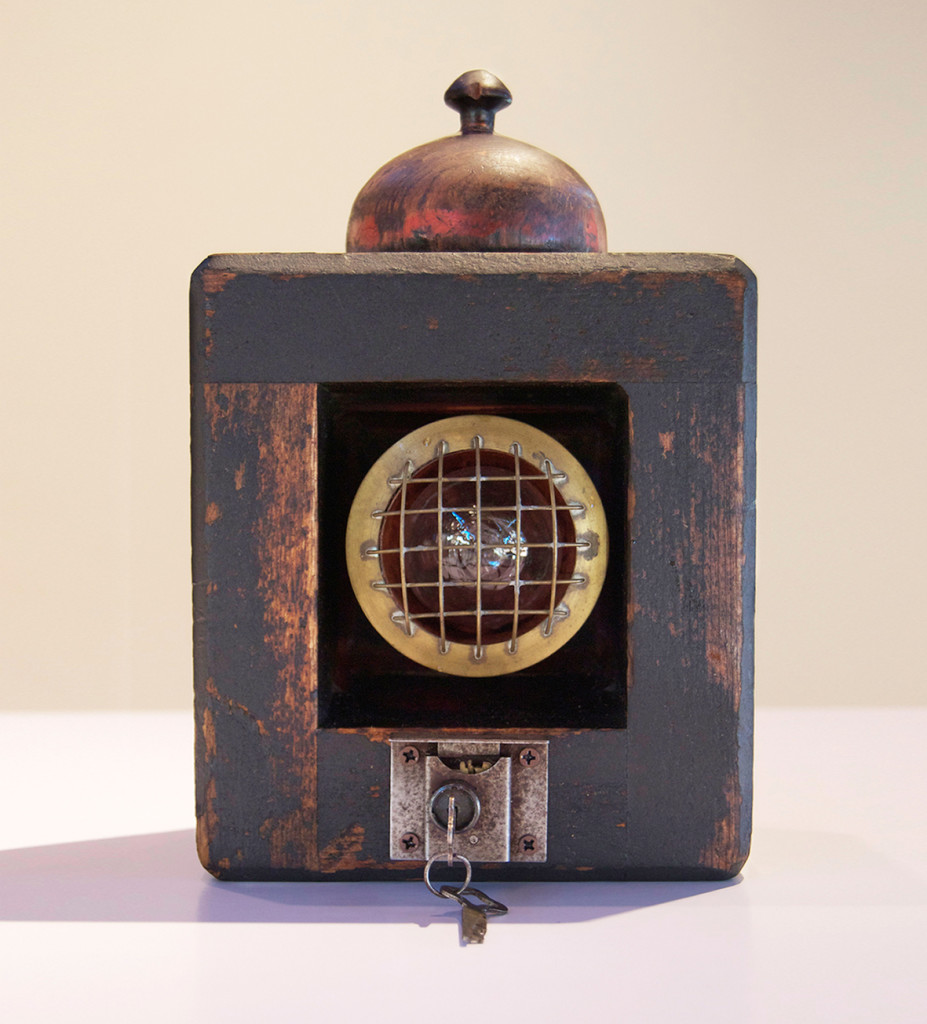 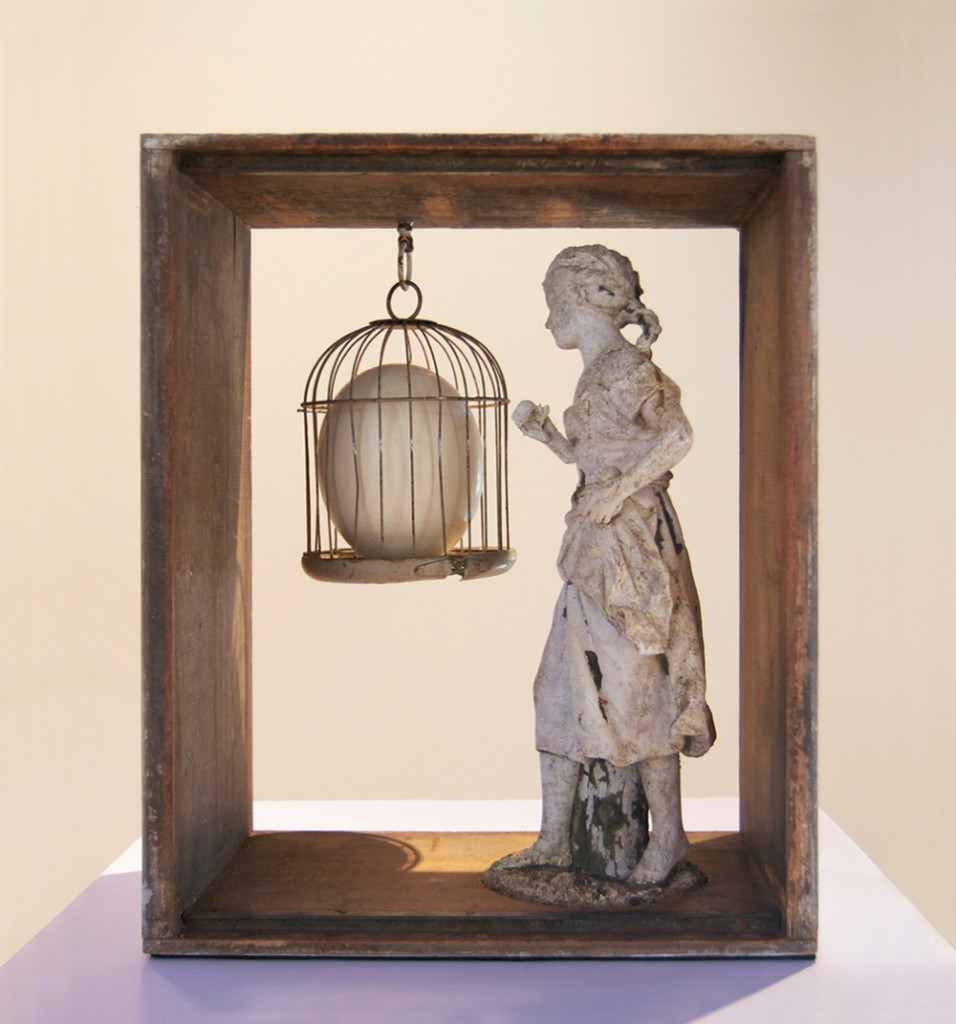 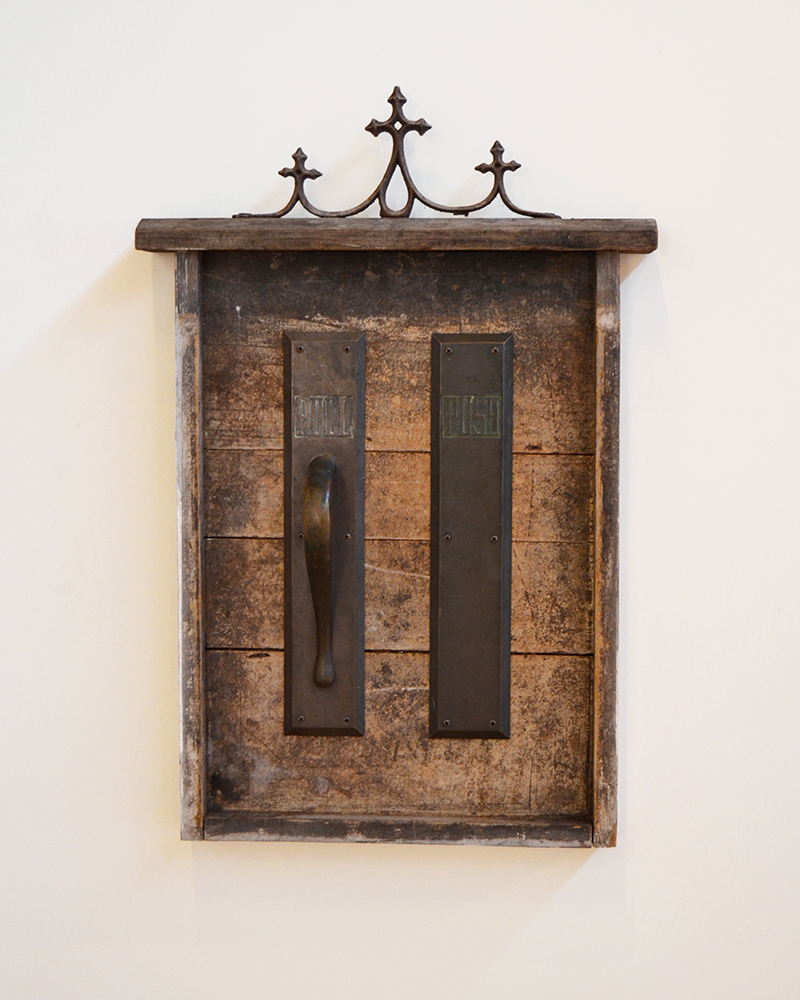 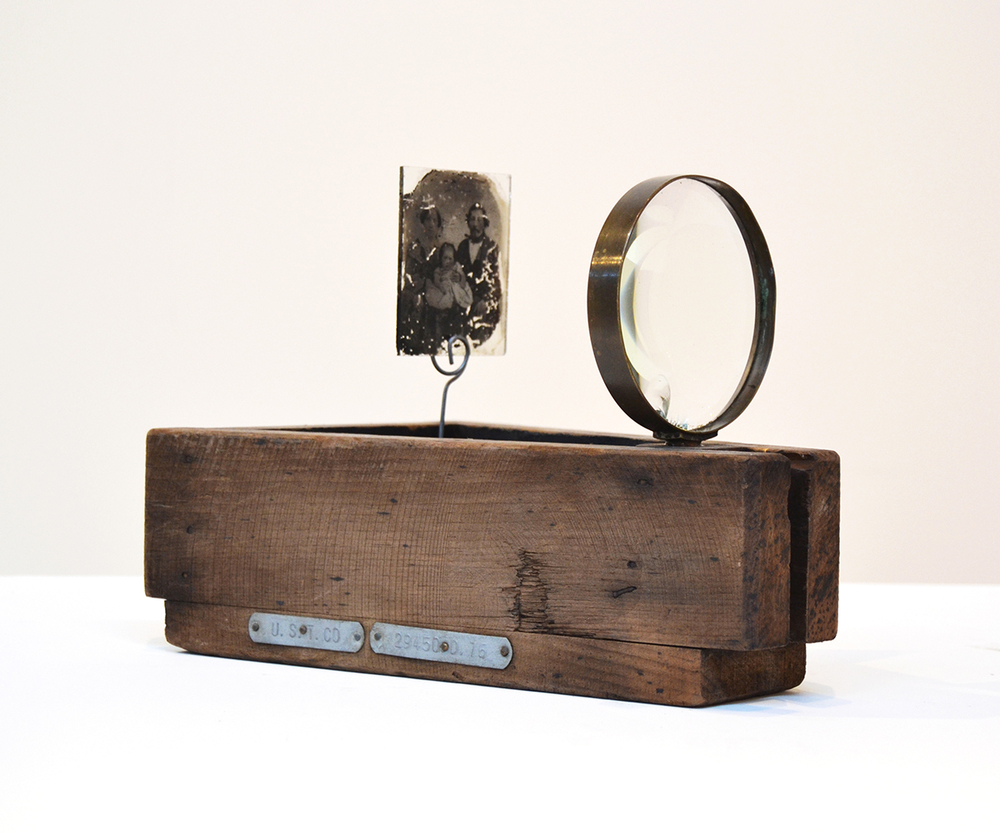 The intimate display of artistic work chosen for Ambassador Yovanovitch’s Kyiv Residence includes two botanical studies of a sunflower, which is of course a plant of great spiritual  and economic importance for Ukraine. Another work is the intriguing assemblage titled ‘Enter’. This last work was created from a section of an old wooden beehive, some vintage metal door plates (spelling PUSH and PULL respectively), and a small section of ironwork from an old church fence – which is perhaps the perfect visual metaphor for the work of diplomacy. The unifying order behind the creation forms the symbolic backbone of the display that unites the United States with Ukraine: ‘In addition to being Ukraine’s national flower, I was fascinated by the sacred geometry, specifically the Fibonacci sequence, contained in the spiral layout of the seeds. The sequence follows a pattern found throughout the natural world, from the spirals of the galaxies to nautilus shells, curled ferns, and pinecones, to whirlpools, to the geometry found in the human body including our own DNA’ Gowan explains.

So given the inexhaustible open curiosity with which she regards the world around her, it is difficult to believe that this cultured, elegant Connecticutian lady carries a load of grief in her heart. Gowan’s artistic endeavor is a testament to one woman’s ability to overcome personal tragedies through enduring faith and creativity. After a near-lifetime in the fine art tradition, where watercolor, egg tempera, and graphite were her main expressive tools, Gowan’s creative practice was rocked by the successive deaths of both her husband and son – who was just 38 years old – in 2012. The pressure of an upcoming exhibition forced her to keep producing art, and that fateful year, she shifted her practice to the production of  bricolage. ‘As I roamed through flea markets, tag sales, street fairs, antique marts, and junk shops collecting objects for my assemblages I noticed that I was rarely sad while ‘on the hunt’, and I began to find joy in my studio again’, the artist shares. ‘I discovered a healing vernacular for myself, a new personal dialect.’ In 2014, a smiling and radiant Gowan greeted the crowds who flocked to her solo exhibition at the Morrison Gallery in Kent. The exhibition not only showcased Connecticut’s strong art tradition, but the strength of its women. After all, it is the state that in 1974 elected Democratic Governor Ella T. Grasso, the first woman to hold the high office. It is also the state whose official state heroine Prudence Crandall fearlessly defied prejudice when she opened the first integrated classroom in America. Gowan’s openness about her losses with people whom she meets during the exchange astounds the Ukrainian audience and some open up to the artist in return. For Gowan, the Ukrainian visit proves both inspiring and cathartic, not without its own intimate revelations.

Idealists often expound on the power of art’s common language in influencing great power politics. On the other hand skeptics often dismiss state-sanctioned arts exchanges as propagandistic displays of pleasantry, as well as being hermetic spaces for political elites, in which aesthetics trump ethics. There is the infamous example of the embrace of Abstract Expressionism by the CIA during the Cold War for the dual purposes of furthering the spread of American cultural values and the fulfilling of political needs. That example spoke to both sides of the debate. However, the ultimate litmus test of the value of a  cultural exchange is the quality of the art on display as well as the personal way in which it resonates with individuals at a specific time and a specific place. Earlier this year, I saw Grant Wood’s iconic ‘American Gothic’ in London. The painting was the cornerstone of ‘America After the Fall’, the Depression-era companion piece to the Royal Academy’s blockbuster display of Soviet revolutionary art between 1917 and 1932. I had expected disappointment, a Plexiglas-encased Mona Lisa, a box to tick in seeing the much reproduced work in person. Yet, the sheer materiality of the small oil-on-beaverboard depiction of a people trapped between a glorious past and a bleak future, between a proud European legacy and an isolationist contemporary America, between idyll and ruin, left me breathless. With the menace of a dozen details – the arched window of Dibble House, the texture of the linen shirt, the gleam of the pitchfork – it demanded intellectual retribution. Wood famously commented in 1930 that he ‘had to go to France to appreciate Iowa’. Today it is his art, and the art of American artists both living and deceased, that show us that the human faces behind the great power’s glamor.

Myroslava Hartmond is the owner of Triptych: Global Arts Workshop, Ukraine’s first private fine art gallery since 1988. She is a research Associate of the Centre for International Studies, University of Oxford, where she explores the role of culture in global affairs.