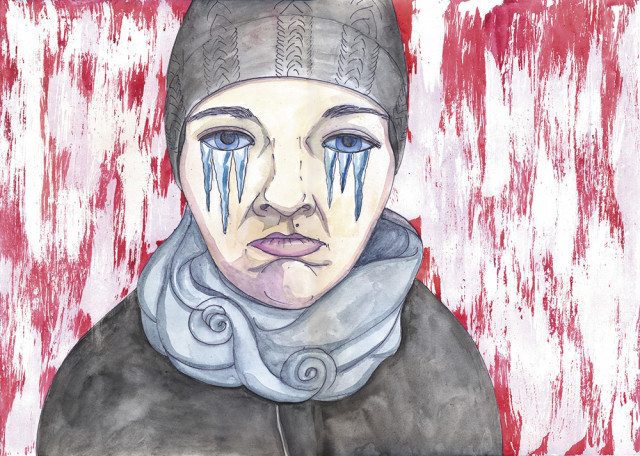 Kinder Album is the pseudonym of a young woman artist from Lviv. Kinder Album is an anonymous art project which began on Facebook in 2012. The project’s author lives in Lviv, working in a variety of media including painting, graphic design, photography, street art, video art, installation and performance art. Her work was shown as part of group exhibitions in Poland, the Czech Republic, Denmark and the UK. In 2015, the artist was nominated for the PinchukArtCentre prize.

The pseudonym “Kinder Album” is derived from several sources: the artist’s appreciation for the musician Sergei Kurekhina, specifically his “Detskiy Album” (“Children’s Album”), and examples of the ‘children’s album’ format in classical music, such as Tchaikovsky’s 24 Pieces for Piano. The characteristic naiveté of the traditional children’s album, along with the finger-paintings of her three-year-old son, served as the initial inspirations for her body of work. Her work often imitates that of a child. Elsewhere, her images are of children, or of decidedly adult themes illustrated from a child’s perspective.

Kinder Album’s exhibit Winter Album, presented at the Invogue#Art Gallery is a reflection on the themes of loneliness and transience, representative of her style and thematic proclivities. It is rife with evocative imagery and the suggestion of narrative, represented by a series of intertwined scenes. The exhibit relies on dualities – puritanism and freedom, life and death. Within the scenes, sex is the concentrated embodiment of life and the continuation of being. Death, trauma and impermanence haunt the figures of the exhibition. 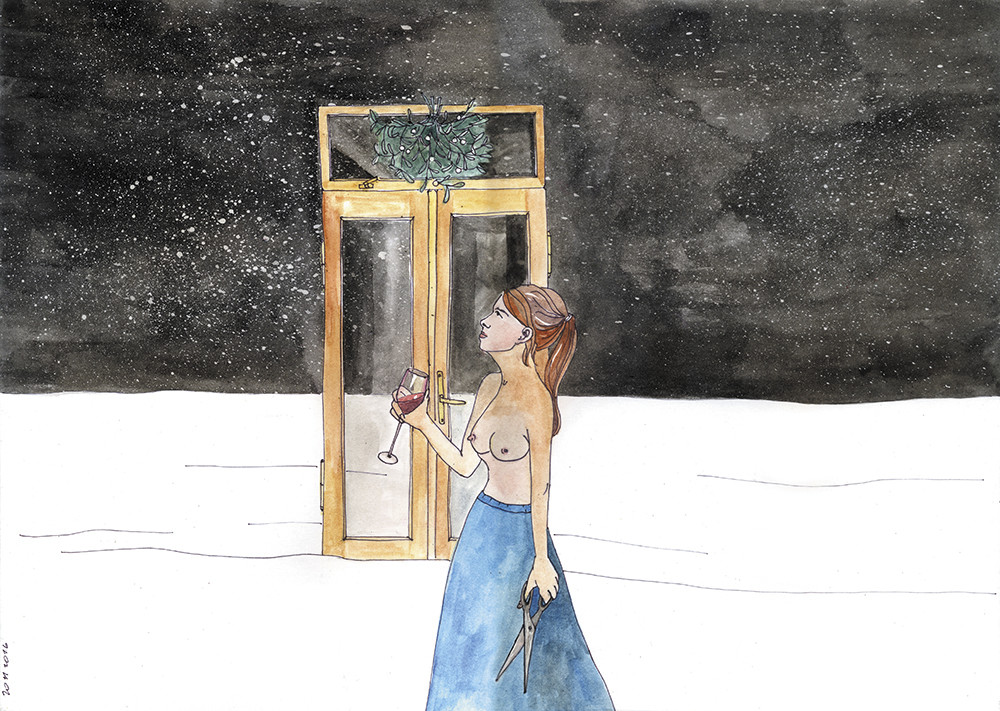 Kinder Album describes Winter Album as “a series of paintings on a specific theme – as if an art teacher asked children to paint something about winter. The exhibition consists of watercolor paintings, videos and graffiti on the walls of the gallery – the graffiti depicts children as they go house to house after Christmas, singing carols in order to get candy, dressed in the costumes of angels and devils. Video installations depict the moment that snow ceases to fall. A partially-dressed woman sips her beer on a balcony, admiring the snow. She is fearless in her nakedness, unfazed by the snow or the cold. As in the movies, the cool crowd drinks and smokes – the attributes of self-assuredness are a bottle and a cigarette. I tried to depict the state of being simultaneously celebratory and melancholy; that is to say, people drink in good times and bad […] Overall, I sought to make this project a ‘classical’ exhibition, exposing more viewers to my work, and expanding the audience of Kinder Album. It expresses itself in a more direct and unsophisticated language to viewers. It seems to me that Odessans appreciate this, and its possible that I will continue such a dialog with the offline public.” Kinder Album describes herself as the active subconscious of a schoolgirl who never grew up, or on the contrary, was never a child.

Masha Tseloeva is a curator.