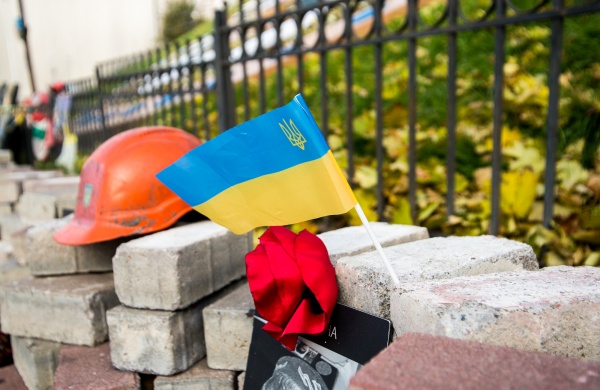 On Monday, Ukrainian citizens in Kyiv commemorated the third anniversary of the Euromaidan revolution. The mood was very somber. Dozens of people left flowers on Instytutska street — which was where the Berkut interior ministry battalion was ordered by the Yanukovych government to inflict the worst of its violence against the Euromaidan activists. Members of the National Corps party held a protest march, demanding progress in the investigation of the massacres three years ago. Investigations of the incidents remain stalled and no high level government figure has yet been held accountable. A few incidents of hooliganism and broken windows were reported.

In a speech the same day, President Petro Poroshenko emphasized the notion that despite the hardships of the past three years, things are improving — albeit slowly, if not precariously. The president also invoked the Latin maxim “Per aspera ad astra” (through hardship to the stars). He thanked the military and reaffirmed Ukraine’s commitment to a European future. The speech reflected a deep awareness of the fact that Ukrainians are exhausted and feel that many promises have been left unfulfilled. Many residents of Kyiv had mixed feelings about the anniversary. “I’m more optimistic than I was last year” says Asya, a 19 year old student, “some people are disappointed with the president because he didn’t keep all his promises, but from another side, business has started to recover, step by step”. Others, however, are growing tired of exhortations to stay the course. Kate, 16, feels more negative about the future than she did at this time last year. “I thought something good could happen, but now I understand that all my dreams were only dreams … If this political group will continue, the country will die,” she says. Confidence in the government was further eroded in recent weeks when the new e-declarations system went online revealing millions of dollars in cash, real estate, cars, and jewelry held by Ukrainian ministers and MPs. Nevertheless, many observers see the implementation of the system as a victory for anti-corruption reformers.

24 year old accountant Sergey, who describes life before the Maidan as “pretty good,” doesn’t think the revolution has had a positive effect on regular people. The revolution simply “replaced bad men with other bad men” he explained.

Olha, a 24 year old accountant from Luhansk, says that the Maidan should have been a revolution of honor and dignity, but something went wrong. “Before 2014 I had a stable life with a bright future, but now I am person without a home. I am apart from my relatives. I don’t know if this was worth it.”

The frustration Sergey and others like him have expressed is widespread, and there are rumors of early parliamentary elections, with some commentators even warning of a third Maidan if elections aren’t held soon. Unfortunately, the political situation remains unstable, and it is likely that populists would fill the ranks of the new parliament if new elections were called.

Luke Smith is the Copy Editor at The Odessa Review.