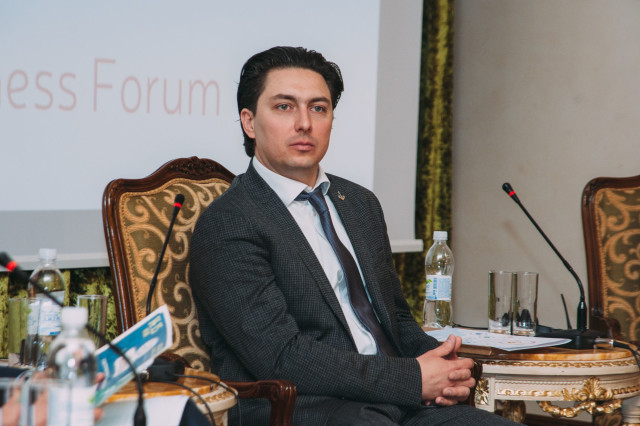 Odessa Review: What methods of attracting foreign tourism to Odessa do you envision for 2016?

Ivan Liptuga: There are many ways of attracting tourists, and they change according to the season.

Odessa has always enjoyed a great influx of tourists during the summer season. Just the sun and sea alone were enough to fill up Odessa hotels to 95% capacity most summers. Up until 2013, the tourist demographic breakdown in Odessa looked something like this: 70% from the Russian Federation, 20% from within Ukraine, and 10% from other countries. In the last two years, for obvious reasons, the Odessa tourist demographic has changed. Now, we mostly have fellow Ukrainians, Moldovans, Belarusians, Turks and a smaller percentage of tourists which represents a mélange of other nationalities. These tourists have a somewhat different price range – they need realistic services, a different level of entertainment. But this is not entirely a negative development – the diversified tourist flow has given Odessa a sort of wake-up call. After years of easy, almost guaranteed revenue, the standards had become somewhat lax – now Odessa is holding itself to a higher standard of quality and revamping the range of tourist services that it offers. So and many decisions are being implemented which will make our city even more attractive and welcoming to guests.

OR: What problems have you encountered while working in the Odessa hospitality industry? What solutions do you envision for these problems?

IL: The main problem that we have, which unfortunately surfaces periodically – is the political provocations aimed at destabilizing our city and the media buzz which is artificially created about it. Now, when tourism marketing for Ukraine overseas is almost non-existent, these negative events become virtually the only source of information foreigners have about Ukraine, which creates a very distorted picture. Our politicians, in their constant pursuit of popularity, are not realizing the irreparable damage they are causing to our country’s image both as a tourist destination and an investment opportunity. It’s not uncommon for some of these officials to organize staged “protests” with paid attendants in their own self-serving interests. Things like this are an instant turn-off for tourists – these politicians are harming their own country by participating in actions such as these. Peace and security are the most important factors for the growth of the Ukrainian tourism industry right now.

Another problem is the still somewhat underdeveloped state of our infrastructure, first and foremost the state of the very roads that the tourists need to use to get here. Unfortunately, the repairs critically necessary to the main highways seem to be happening on paper only. We also need to finish construction of an updated airport terminal, seeing as the terminal Odessa has now is quite outdated by international standards. The city’s infrastructure – especially informational infrastructure – must be made up to date in every way possible. It is also necessary to construct navigational stands, which tourists can use to orient themselves in the city, street signs and waypoints in multiple languages, which will make foreign tourists comfortable exploring the city on their own.

Our third problem is the service industry. Unfortunately, Odessa lacks in some areas a certain “culture of hospitality” which exists in other European tourist destinations. For example, a knowledge of English and/or another foreign language is a requirement for employment in hotels. However, taxi services, museums, clubs, supermarkets, and malls do not meet this requirement, and finding service personnel with foreign language skills can be rare in these settings. This makes it uncomfortable, and at times impossible for a tourist to navigate the city without an interpreter. Some in the hospitality industry give the excuse that most of our tourists are either internal or Russian-speaking, but this excuse won’t hold up if we want to expand foreign tourism. This situation needs to change.

OR: What, besides the city’s rich history, does Odessa have to offer to a foreign tourist? How is the city and its attractions “advertised”?

IL: All tourists enjoy being entertained. To make it easier to find out what interesting activities are available in Odessa, we created a unified calendar of events: Odessa 365. It includes all the festivals, cultural, athletic, musical, and all other types of events happening in the city. It also includes a listing of the business forums.

We want to “market” Odessa as a city of inspiration – because this is the reality. It’s not just a pretty slogan – although it is that also – it reflects Odessa’s real atmosphere, which is unique and inspirational. Odessa’s myth, it’s charms, don’t have to be artificially created – they were formed over the years by Pushkin, Gogol, Babel, Ilf and Petrov, Paustovsky, Kataev, Olesha, Akhmatova, Inber, Kirsanov, Bagritsky, Kuprin, Zhvanetsky…and these are only some of the great authors who contributed to Odessa’s name. This city has an established character. Today, unfortunately, Odessa’s deep roots in world culture – in literature, science, music, medicine, cinema, sports…you don’t very often see them being used to the city’s advantage, and if they are, it is often in a primitive, superficial sort of way.

For example, an inextricable part of the Odessa mythos is the typical Odessa courtyard. This place, so ubiquitous to those that live here, was the origin for so many traits Odessa is known for – its language, a combination of Slavic, Romantic and Germanic dialects; its cuisine which combined the recipes of the Mediterranean, Europe, and Asia – and its style, a synthesis of countless different cultures and fashions.

The press licenser K. Zelensky, who lived in Odessa in the 19th century once remarked: “Life in Odessa offers all the comforts of a province combined with all the advantages of a capital”. You can confirm this observation for yourself by simply looking around Odessa – from the courtyards to the center. It was Odessa’s courtyards – the provincial part – which played a formative role in the city’s character, mindset, worldview…they contributed greatly to the myth that exists around Odessa.

Odessa also has a very distinct world compared to other cities. It’s a beautiful city not only to vacation in, but to live in – it’s truly a city of love and inspiration.

OR: What would make a foreign tourist want to choose Odessa as a destination on their Ukraine trip over a city like Lviv, for example?

IL: Well, why should they choose one over the other? I think they should visit both Odessa and Lviv!

OR: What does the city need in order to become a truly popular European tourist destination?

IL: In my opinion, three basic things: systematic marketing, infrastructure, and a serious and well-organized tourism industry which can prepare qualified hospitality and service staff.

OR: What would you say about the price point of vacationing in Odessa, as compared to other popular tourist destinations in Ukraine?

IL: I would say it is nothing if not affordable! I wouldn’t say there is a big difference in price point between Odessa and, say, Lviv. Kyiv is more expensive, of course, but that is too expected from the capital of a country. In any case, right now Odessa offers a great deal to foreign tourists looking to vacation affordably, and this is one of its main attractive qualities. Because of the recent rate of the UAH, it is much cheaper to spend time here than in Turkey, Bulgaria, Romania, Poland, Hungary and many other neighboring countries.

OR: Realistically, how do you see the future of the city’s tourism industry? What goals are being set?

IL: Odessa has every chance to revive its former glory – but this has to be done in the context of modern international development. Odessa is too large and important of a city to limit its development to simply being a tourist destination. It is also a logistics and transportation hub, an axis of international trade, cluster of IT companies, the financial center of Southern Ukraine – and, of course, a main hub of the tourist complex as well, one with many natural resources which should be carefully and systematically developed. I see Odessa’s future in terms of a complex marketing strategy, as I call it, ‘the 5 T’s’ – Transport, Trade, Technology, Tourism, and Trust.

OR: What is the most important thing that needs to be done right now to popularize Odessa as an international tourist destination?

IL: An advanced marketing system must be created. We need to participate in the largest tourism expos. Advertising and PR in foreign media must be expanded – we need to work on determining our target markets, and promoting Odessa within those markets.

OR: What has been done on a governmental level in order to enhance Ukraine’s brand on the international tourism market as well as its image in the West?

IL: At the Department of Resorts and Tourism we are very involved in the systemic development of the Ukrainian tourism industry. Unfortunately, it has been quite hard getting the “powers that be” to pay attention to this sector of our economy, which, for the past 25 years, has slowly declined instead of showing growth. Tourism gets 0% from the government budget! This is why most of our efforts are currently aimed at consolidating markets and attracting investors.

OR: What is your forecast for Odessa’s 2016 tourist season in terms of internal and foreign tourism?

IL: Odessa is basically the top choice for tourists within Ukraine. However, due to the risk of the city’s infrastructure becoming overloaded during peak seasons, we need to work with the neighboring regions of Nikolayev and Kherson. If a tourist arrives to Odessa and has to experience the discomfort of overcrowded trains, hotels, restaurants and beaches this will discourage him from visiting again. This is why our task is more complex than simply attracting tourist flow – we also need to make sure that there is enough quality, comfortable accommodations. Quantity should not overshadow quality.

OR: What aspects of the tourism industry do you believe to be the most developed in Odessa, and which ones need to be brought up to date?

IL: The cultural, gastronomical, and entertainment aspects of tourism are fairly well developed. I would say the areas needing the most attention are the business and event sectors. There is a drastic need to construct a modern, large expo and conference center in Odessa. The health and recreational aspects of tourism also need to be expanded. Odessa has a massive, untapped (and in some cases, sadly, through negligence irreparably damaged) natural resource – its healing springs. This is something that we need to return to, to develop it as a big marketing point for Odessa.

OR: Does Odessa have a chance to become Ukraine’s top touristic and cultural center?

IL: It already is!