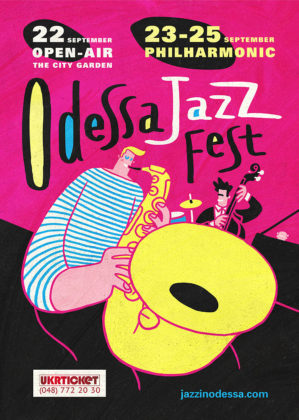 The international jazz festival in Odessa is a well-established tradition which is eagerly expected every year by all Odessites and jazz lovers. On September 22nd, the 16th jazz forum was officially opened in Gorsad, as is customary, with an open-air concert featuring Odessa musicians and eminent international guests of the festival.

Ukraine was represented by Trio Pokaz (charismatic pianist and composer Andrey Pokaz, contrabassist Vitaliy Fesenko, and drummer Yakov Taruntsov), as well as Tamara Lukasheva with the Odessa National Philharmonic Orchestra under the direction of Hobart Earle. The only person missing, whose absence was sadly felt by all festival guests, was of course Yuri Kuznetsov. One of the most prominent Odessites, the founder of Odessa Jazz Fest and constant promoter of Odessan jazz music, Kuznetsov died in May of this year.

Every evening during the three days of the festival — September 23, 24 and 25 — the great hall of the Odessa Philharmonic was filled with applause and captivating jazz melodies. The festival organizers have commented that the event’s placement at the end of September is not accidental, but intended to extend the tourist season in Odessa. Upon the completion of the festival, it can be said with certainty that Natalya Ertnova (the director of Odessa JazzFest) and her team succeeded in making that happen. Every night, more and more tourists who were lucky enough to be in town for this musical celebration could be seen on the steps of the Philharmonic.

This year, the festival introduced a new music award in memory of Yuri Kuznetsov, given to the best performers of Soviet/Ukrainian and international jazz music. The nominees have to be 8 to 23 years old and are selected in two categories: instrumental music and vocal performance.

Yuri always supported any Odessan initiatives that were connected to music. The idea to create a Yuri Kuznetsov music award was proposed by Solomiia Bobrovska after his death. “It so happens that the directive to create this regional music award was signed on Yuri Kuznetsov’s birthday. It is our small gift in memory of Yuri, whose charisma, creativity and virtuosity were exceptional,” she remarked.

On the day when the award was presented for the first time, the talented vocalist and frequent guest of the festival Tamara Lukasheva prepared a special project that was eagerly awaited by all participants and audiences of the festival. The sympho-jazz concert program “Cinema Music of Yuri Kuznetsov” featured melodies written by the maestro for films, as well as selections from his well-known jazz compositions.

Every day, after the astonishing performances at the Philharmonic, many guests chose to attend jam sessions held at various venues around the city. These jam sessions were joined even by musicians who were in town coincidentally — like pianist and former student of Yuri Kuznestov, Odessite Alex Parkman and American guitarist singer with Ukrainian roots Tina Kristina.

The mood that suffuses the city during Odessa JazzFest is indescribable. Only being in the midst of this atmosphere, one can appreciate the love for jazz that lives in the heart of every festival visitor. The festival could not continue existing without this love: the filled concert halls, the many participants of jam sessions, the unending applause and curtain calls, the warm response of the musicians is what inspires the JazzFest organizers.

In closing the festival on September 25th, Natalya Ertnova thanked everyone who stood by her and supported the festival all these years. “Of course, we are all missing Yuri, but I know he is here in this concert hall with us today. Just now, the trio “Infiltrators” performed on the stage in a free jazz style, which was Yuri’s natural element. I am convinced, that is he was with us, he would be behind the scenes, or even on stage, playing along to the Latvian musicians.”

Odessa JazzFest is an event that makes Odessa and all its residents proud. Each year, more and more people are appreciating beautiful music thanks to the efforts of the festival organizers. Some consider Odessa to be one of the birthplaces of jazz. Certainly, the Southern Palmira was always one of the “jazziest” cities in the post-Soviet territory and will continue to be so while it gives life to great musicians like Yuri Kuznetsov.