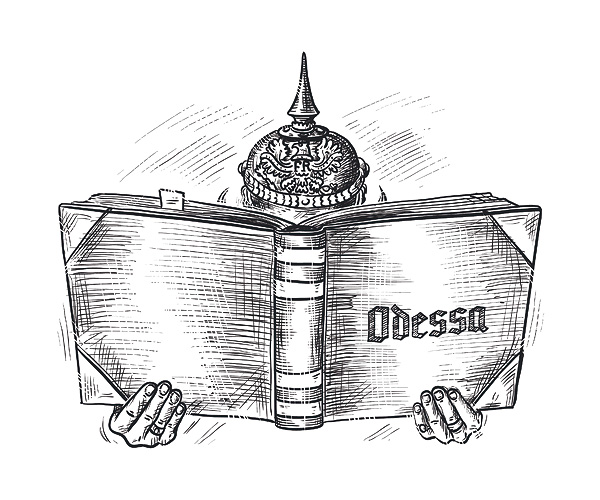 Odessa was very far away, even for most of the Germans living in Russia. Traveling there was difficult, and many Europeans could never imagine that such a beautiful a city was to be found in the south of the Czar’s empire. Though the busy port nevertheless attracted a considerable number of Germans from Germany, Austria, and the Baltic provinces of Russia, it was for economic rather than literary purposes. It is for this reason that, with a few very noteworthy exceptions, Odessa hardly ever appears in German literature.
Even German playwright and journalist Wilhelm Wolfsohn (1820-1865), who himself was an important mediator between German and Russian literature, and who grew there, never wrote about his native city.

In the western regions closest to Southwestern Russia (such as Galicia and Bukovina) and the easternmost provinces of Austria, Ukrainian, Yiddish, Polish and German constituted the main spoke languages. Jews were numerous there, and many of them began abandoning Yiddish for German since around 1850. For economic, religious, and family reasons, they had close contacts to the much larger Jewish communities in neighboring Russia. Wolfsohn’s mother, for example, came from Galicia. Geographically, Odessa was closer to Galicia than Vienna, but the young intellectuals from Lemberg (Lviv) and Czernowitz (Chernivtsi) turned rather toward the Austrian capital, where Jews were successful in many domains. Czarist Russia did not attract them in the same way that German culture did.

Roth provides hardly any details of the city; he doesn’t have his hero follow Odessa’s streets – rather, Odessa weaves around his hero like a metaphor for the ecstatic beginning of his adventures

Even Karl Emil Franzos (1848-1904), the first major German-language writer from Galicia, (which he left to begin his studies in Graz and Vienna) only rarely mentions Odessa in his voluminous work despite his mother having been born there and that fact that he had been there as a young man. The one exception is the short story, “Landsmann und Landsmännin” (it is to be found in his 1893 collection Ein Opfer, one of his less successful books), which tells of unpleasant encounters with his German countrymen abroad. One of these is set in Odessa. The narrator meets another German, who pretends to be a victim of repression in Russia, but who in fact makes up a story in order to wheedle money out of his trusting countrymen. At that time, many German-speaking Austrians considered themselves to be Germans. The story begins with a description of the narrator sitting under the Acacia trees on the promenade, enthralled by the “compelling power” of the view with the sun sinking into the “wide, wide” sea, but then shifts to the conversation taking place between the narrator and the impostor. The story is set in a German Bierhalle in the Russian city.

Perhaps unsurprisingly, it is Joseph Roth (1894-1939) is Odessa’s best hope for immortality in German literature. Roth left his native Brody in Galicia for Germany in 1913, living there from the early twenties until 1933, during which time he became successful both as a journalist and a major novelist. During his return visit to report on Russia in 1926, he was far more interested in the social and political aspects of the new state rather than in taking in the visual impressions of the places he visited. There were some exceptions however: for instance, he vividly describes the river cruise on the Volga ending in Astrakhan, where he describes flies that have the poise of large mammals. That literary sketch has only recently been translated into English, published in last year’s collection ‘The Hotel Years’. Although he seems to have stayed in Odessa for more than a week, the city is more or less absent from his articles about Russia. Despite this the city seems to have captured his imagination, as Odessa appears in three of his late novels.

In his 1936 novel Beichte eines Mörders, erzählt in einer Nacht (Confessions of a Murderer), a Russian narrator, the illegitimate son of a prince and former agent of the Czar’s secret police, recounts his life to friends in Paris. Odessa is the place where he met his father for the first time, and where he was initiated into his dubious career. Two pages describe the “great big” modern city around the year 1900 (“laid out according to a European pattern”), but they mainly concentrate on the harbor and the beauty of the sea. It is the first city the hero has gone to all by himself, “the first wonderful station on my wonderful way ‘up’.” Meeting someone from abroad in a pastry shop, he begins to muse about foreigners: “Europeans, those people who might be much more intelligent than us, while they’re worth less, […] exceptionally gifted by God, they don’t believe in him.”
Here Roth provides hardly any details of the city; he doesn’t have his hero walk Odessa’s streets – rather, Odessa weaves around his hero like a metaphor for the ecstatic beginning of his adventures.

Das falsche Gewicht (1937; Weights and Measures in English), is the story of a completely assimilated Western Jew, Anselm Eibenschütz, who is sent as a civil servant to a small, predominantly Jewish town in Galicia. The Jews of Zlotogrod hate this man whose duty is to strictly check their business activities, which had never been checked before this and naturally can not withstand checking. Using the precise weights and measures imposed by the central authorities, Eibenschütz represents law and order, which had so far had not reached Zlotograd and could only disrupt the festering and corrupt local economy. The most commited enemy of the lonely Eibenschütz is one Leibusch Jadlowker, who has fled from Russia after he committed a murder – in Odessa – and who is involved in many criminal activities, among them human smuggling from Russia to the West. He ends up brutally killing Eibenschütz, who, while dying, experiences an epiphanous vision of the great calibrator cryptically informing him: “All your weights are wrong, and all are nevertheless right.”

The city appeared a year later in his Das falsche Gewicht («Weights and Measures») which is the story of a completely assimilated Western Jew, Anselm Eibenschütz, a civil servant who is sent to a small, predominantly Jewish town in Galicia. The Jews of Zlotogrod hate this man whose duty is to strictly check their business transactions, which had never been checked before, and which, of course, can not withstand being checked. Using the precise weights and measures imposed by the central authorities, Eibenschütz represents law and order, which had so far had not reached Zlotograd, and which could only disrupt the festering and corrupt local economy. The most commited enemy of the lonely Eibenschütz is one Leibusch Jadlowker, who has fled from Russia having committed a murder – in Odessa – and who is involved in many criminal activities. These include human smuggling from Russia to parts of Europe further West. He ends up brutally killing Eibenschütz, who, while dying, experiences an epiphanous vision of the great calibrator cryptically informing him: “All your weights are wrong, and all are nevertheless right.”

The very name of Odessa – where Jadlowker was born and where criminality is reputed to be rampant – contributes to his characterization as an entirely negative figure. Of course, such symbolic deployment of prejudices concerning towns and whole regions is not a rare occurrence in literature. The idea of Odessa as an ill-famed Russian port might also have inspired Franzos to situate his story there.

Odessa appears again in Roth’s last novel, Leviathan, which was first published in 1938 in The Pariser Tageszeitung. The main character in Leviathan (The Leviathan in English) is Nissen Piczenik, a redheaded Jew in a Russian shtetl, who sells coral of various colors – from “upper-edges-of-tea rose-leaves-whitish” to carrot and blood-colored –, which he loves more than women (or at least more than his infertile wife), and who longs for the sea, the “real sea,” where the coral live. It is the same sea that one has to cross to get to America. Piczenik’s first contact with the sea, which proves in the long run to be fatal, takes place in the port closest to his small town, the radiant harbor of Odessa, where the sides of the ship can be coral-red, and where thousands of tiny fish might fly towards you. After having spent some joyous moments with the Fischchen and forgotten his obligations as a simple Jewish man, Piczenik returns home to meet the devil – who is a salesman of celluloid coral.
Leviathan’s harbor scene resembles a daydream far from reality’s paraphernalia, where the harbor is on the one hand a paradisiac place filled with flying Fischchen, and on the other, a place reserved for longing that goes far beyond it.

The author of this article hopes that the reader will forgive her for allowing herself to allude to the sonorously homonymous Argentinian-Jewish poet, Alejandra Pizarnik (1936-1972). Pizarnik, whose non-exiled Ukrainian family was exterminated during the Holocaust, might have had some sympathy (or, as a defense, rather have ferociously disapproved of him) for the coral-loving Piczenik, who never did make it to America.

Thus, to return from Hispanic South America to Germanic Russia, in all three of Roth’s novels, Odessa is deployed as a symbol for something sinister. In Die Beichte eines Mörders and Leviathan, it is a metaphor for the ecstasy of an entirely new experience and subsequent doom; for a luminous place where light anticipates darkness and where the protagonists suddenly become aware of their own existence. It is determined, confused, and “oceanic.” (Seeing Odessa for the first time, the old “continental” Nissen Piczenik transforms himself into the “oceanic” Nissen Piczenik.)

So, while few German-language writers other than Roth have written about Odessa, the German public could nevertheless read about it in the stories of Isaac Babel, who spent some time in Berlin during the twenties, and where, among many others, he met the young Elias Canetti. In 1926, Babel’s Odessa Tales were translated into German as Geschichten aus Odessa and published in Berlin by Malik, the renowned leftist publishing house.
That same year, many Germans and Austrians would see the city for the first time in the Battleship Potemkin when Odessa steps in Eisenstein’s film made the city famous. The steps mark the entrance to the city when one arrives from the sea and are always half invisible, whether one looks at them from above or up from below.

Chana Galvagni is a Paris-based writer who was born in Bolzano, Italy